It was 'apocalyptic, like a scene from a movie' - UCT students traumatised after fire, evacuation 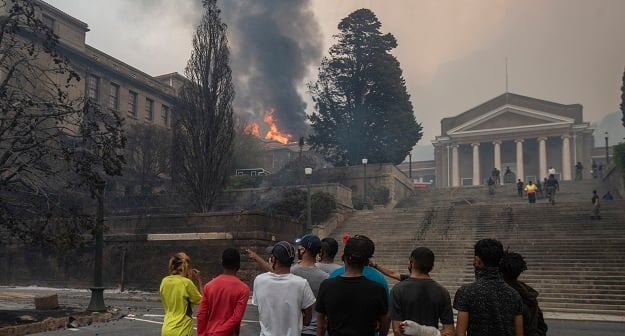 Students watch as a building burns at University of Cape Town.
Brenton Greach

University of Cape Town (UCT) students have been left traumatised after their evacuation ordeal from campus on Sunday, following a devastating veldfire.

The fire spread rapidly from Rhodes Memorial, after which more than 4 000 students were evacuated from the campus.

It gutted historical UCT buildings, including the Jagger Library and the Fuller House student residence.

On Monday morning, the fire had spread towards Devil's Peak and the front face of the mountain, which affected Vredehoek and the surrounding areas.

UCT vice-chancellor Mamokgethi Phakeng said all academic activity at UCT had been suspended.

She added that food and emergency accommodation had been arranged for the students evacuated on Sunday.

Many students recalled Sunday's ordeal as a day of panic and confusion.

They were told to pack their essentials and were then transported from the campus in a haze of smoke.

Economics student Mathew Field said the day was "apocalyptic, like a scene from a movie".

"Students were on campus studying for tests, while others were sleeping at [the residences] when suddenly the sky turned grey and red," he said. 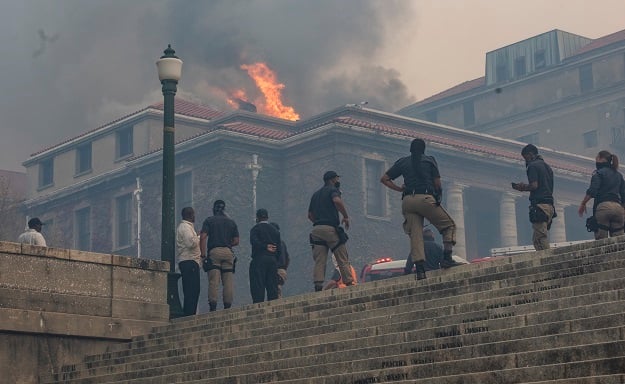 A University of Cape Town library burns after a wildfire spread from the slopes of Table Mountain the university.
Gallo Images Brenton Greach

"It was a day of great trauma, a day that will stay in our lives forever," he said.

Final year theatre studies student Shayne Greene said he didn't have a chance to pack any clothes during the emergency evacuation.

"Everything happened so fast. After the very loud [noise] at the restaurant and fire alarms started going off, that is when I knew I needed to get out of there immediately," said Greene.

He only took his laptop, pen, phone charger and a book during the evacuation.

Greene was moved to a hotel in the Waterfront, near the UCT Graduate School of Business.

UCT Student Representative Council president, Declan Dyer, said students have been allocated to at least nine hotels around the city.

Lawrence was part of a team, which helped students onto buses at the Mowbray terminus.

"I am very proud of the community that came out in numbers to support the displaced students," he said.

He added that many Muslims gave iftar food packs to the displaced students.

"Students even reached out to help other students, using their own money to buy food, which was an emotional moment for me," Lawrence said.

Here are the results for the Daily Lotto draw
Full list of lottery results
Lockdown For
DAYS
HRS
MINS
Voting Booth
Matric results are out! Are you happy with your child's result?
Please select an option Oops! Something went wrong, please try again later.
No, the pandemic really messed up their ability to focus
34% - 810 votes
Yes, they did well given the circumstances
66% - 1571 votes
Previous Results
Podcasts
LISTEN | The Inge Lotz Story - a miscarriage of justice