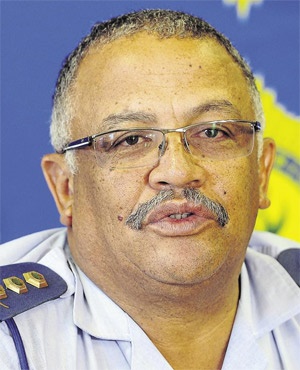 Cape Town - Former Western Cape police commissioner Arno Lamoer has pleaded guilty to one charge in a corruption, money laundering and racketeering trial against him.

"He pleaded guilty to one charge of corruption on Thursday," senior deputy director of public prosecutions in the Western Cape, Billy Downer, told News24.

They faced 109 charges of corruption, racketeering and money laundering involving R1.6m.
Dawjee allegedly paid them for favours by covering some of their fuel, clothing and travel costs.

They pleaded not guilty.

But in December it had emerged that Lamoer may enter into a deal with the State.

In his plea explanation on Thursday, Lamoer said that he entered into negotiations with the State with a view to finalising the trial expeditiously.

Lamoer said he lost his wife in 2005 and raised his three daughters on his own.

He added that he served in the police for more than 35 years with "distinction and loyalty towards our country and its people".

"During the serving in the police, I was never investigated or departmentally charged for any misconduct," he said.

While in the police service, he met Dawjee, who is accused number one in the case.

"This was more than 25 years ago when I was stationed at Manenberg SAPS. We became friends and remain friends through all these years. During this friendship, we supported one another in good times and in difficult time," he said.

Lamoer added that over the last four years, the medical condition of his two youngest children took a turn for the worst as a result of stress caused by his trial and the medical costs were high.

He said medical reports about their conditions were available.

In the document, Lamoer said he pleaded guilty to a single charge of corruption in terms of the section of the Prevention and Combating of Corrupt Activities Act which relate to public officers agreeing to accept or offering to accept a gratification.

Lamoer admitted that, while he was in public office, he made loans from Dawjee and close corporations Towbars Cape and Towbars King, during the period December 2011 to September 2013 with the understanding that it must be paid back on request or after his retirement.

"I honoured the agreement after my retirement."

Towbars Cape and Towbars King are accused number two and three in the case.

However, he pointed out that no favours were done for the accused up until November 17, 2013, when "I accordingly admit that I wrongfully, unlawfully and intentionally gave a letter of good standing to accused no 1 (Dawjee) for the benefit of accused 1 to 3".

In the letter of good standing, attached to the plea explanation, Lamoer wrote that his office was not aware of any criminal investigation against Dawjee in respect of money laundering, drug dealing or criminal activity.

"As the provincial commissioner of the South African Police Service Western Cape, Mr Dawjee is known to the undersigned for 20 years and is not aware and neither bears knowledge of Mr Dawjee being investigated or convicted of any criminal activity.

"As an officer of the law for almost 34 years and in my position as provincial commissioner and senior official, I cannot and will not associate myself with any person, who is involved in any criminal activity," he said.

The letter was on a SAPS letterhead.

Colin Govender also pleaded guilty to one charge of corruption, admitting that Dawjee – who is his cousin – had between November 2011 and October 2013 received gratifications worth R24 601,44.

Govender said their families were "supporting each other when the need arises from time to time with loans and business arrangements".

"I admit that my intention to commit this crime was dolus eventualis as when I accepted the aforesaid gratifications I foresaw the possibility that such gratifications would induce me in the execution of my duties to act, personally or by influencing another to that act in a manner that amounts to improper preferential treatment of [Dawjee and his company]. Despite foreseeing this possibility, I still accepted gratifications."

He said he had, among others, in February 2013 gone to an address in Gugulethu after hours to check on a vehicle used in a burglary at Dawjee’s brother’s house; that he had in February 2013 introduced a warrant officer to Dawjee to assist him with his daughter’s appeal regarding her gun licence application; that he had that same year put a Lieutenant General in Mpumalanga asking about tickets to attend a jazz festival in contact with Dawjee who had spare tickets; and that he had introduced Dawjee to a captain in July 2013 to assist him with an application to temporarily possess a firearm.

Van der Ross pleaded guilty to one charge of corruption.

He said he met Dawjee through work and they had become friends.

"[Dawjee] was always involved with the police in various helpful ways, especially through sponsorships and donations as well as other community upliftment projects. I always saw [Dawjee] as a friend to the police," he said.

Van der Ross admitted to using Dawjee’s business’ petrol accounts on five occasions between May 11, 2013 and July 15, 2013 to fill up his personal vehicle.

Dawjee also sponsored R4000 to him for a police golf event in April 2012, which he declared to the police in the prescribed manner, Van der Ross said.

We live in a world where facts and fiction get blurred
In times of uncertainty you need journalism you can trust. For only R75 per month, you have access to a world of in-depth analyses, investigative journalism, top opinions and a range of features. Journalism strengthens democracy. Invest in the future today.
Subscribe to News24
Related Links
Ex-Western Cape top cop may seek deal to resolve corruption case
Crime intelligence operatives don't do court, Lamoer trial told
Court hears of challenges in Lamoer investigation
Next on News24
LIVE | Covid-19 in SA: Cases hit 1 611 143 as death toll rises to 55 183

Lucky Friday for 3 Daily Lotto players!
Full list of lottery results
Lockdown For
DAYS
HRS
MINS
Voting Booth
As South Africa faces down the third Covid-19 wave, how are you keeping your family safe ?
Please select an option Oops! Something went wrong, please try again later.
Staying at home, isolating and being careful
19% - 619 votes
Sanitising and wearing masks when we go out
67% - 2143 votes
Going on as usual, we're not afraid of the virus
13% - 418 votes
Previous Results
Podcasts
PODCAST | Too Many Enemies: Episode 1 - the assassination of billionaire Wandile Bozwana