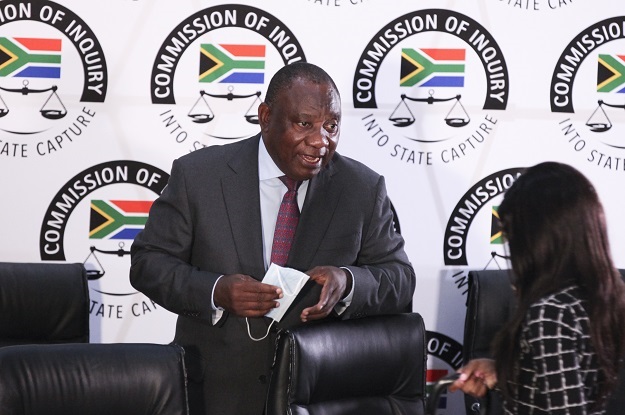 Cyril Ramaphosa during his previous appearance at the Zondo Commission.
Gallo Images/Luba Lesolle

The State Capture Inquiry has announced that President Cyril Ramaphosa will no longer appear before the commission next week as previously scheduled.

The short statement from the commission did not say why the president would no longer give evidence on 31 May and 1 June. It also did not state when he would testify.

However, in a statement released by the presidency shortly afterward, it said the postponement was a request made by the commission.

"The Presidency can confirm that it has agreed to a request from the Commission of Inquiry into State Capture for President Ramaphosa's scheduled appearance on 31 May and 1 June 2021 to be postponed to a later date.

"The president's office is in communication with the commission to secure suitable alternative dates for his appearance."

The Presidency can confirm that it has agreed to a request from the Commission of Inquiry into State Capture for President Ramaphosa’s scheduled appearance on 31 May & 1 June 2021 to be postponed to a later date.

Ramaphosa previously testified at the commission in his capacity as ANC president and as the party's former deputy president. He appeared before the inquiry in April.

It's expected that he will be asked about his role as the deputy president in Jacob Zuma's administration as well as matters related to his current position as head of state.

The commission said it would release more information about the postponement of his appearance "in due course".