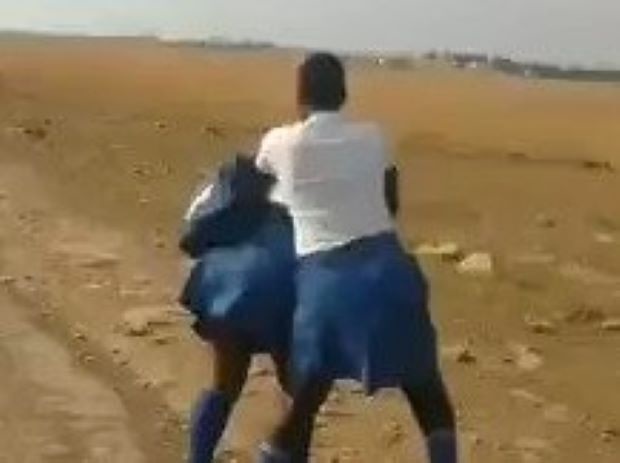 The department's legal services officials have also been directed to assist the victim to open a police case.
Screengrab

The Department of Education in KwaZulu-Natal has suspended two Mathole High School pupils after a video of one of them attacking the other went viral.

"The [department] has summarily suspended two pupils, pending the disciplinary hearing, who attacked a pupil shown in the gruesome video clip that is being circulated on social media," it said in a statement on Tuesday.

In the video, which went viral on Monday, a female pupil can be seen on the floor while another pupils rips her underwear. The attacking pupil then begins throwing a flurry of punches as the other one helplessly takes the beating and pupils watch.

The department said the school was directed to finalise the disciplinary processes within seven days.

"Professional therapy is currently being offered to the victim and other affected learners by competent psychologists from the department of social development."

The department's legal services officials have also been directed to assist the victim to open a police case and to contact the social media platforms' administrators with the aim of removing the video and blocking its circulation.

"The Department of Education wishes to appeal to members [of] the public to refrain from circulating [the] humiliating video clip as further circulation will only serve to inflict more harm to the dignity of the victim for the rest of her life."

We live in a world where facts and fiction get blurred
In times of uncertainty you need journalism you can trust. For 14 free days, you can have access to a world of in-depth analyses, investigative journalism, top opinions and a range of features. Journalism strengthens democracy. Invest in the future today. Thereafter you will be billed R75 per month. You can cancel anytime and if you cancel within 14 days you won't be billed.
Subscribe to News24
Related Links
Crime stats: 9 deaths from bullying in schools - that's more than the number of prison fight murders
Lesufi to visit Pretoria school where 5 pupils allegedly cut off 12-year-old's finger
'School bully' suspended after video of attack circulates on social media
Next on News24
BREAKING NEWS LIVE | Limpopo cops arrest 5 alleged farm attackers, recover guns and stolen cash