Cogta Minister Nkosazana Dlamini-Zuma says the devastating flooding that occurred in KwaZulu-Natal is a sign of climate change, adding that flooding in the province has worsened over the last five years.

"These floods are the worst we have seen in living memory. Over 24 hours, we had more than 400mm of rain. In Durban, for instance, in February - which is the wettest month - we normally get about 102mm of rain - in the whole month. April is not even the wettest month.

"This also tells us that climate change is here with us. The scientists have been telling us that the eastern side of the country is going to be wetter and will have frequent floods; the western parts of the country will be drier and have frequent droughts. We thought it was something in the distant future, but if we look at what has happened in the last five years …clearly, climate change is with us and we are beginning to feel the effects of that."

She was briefing the media after President Cyril Ramaphosa announced that the government had brought back the national state of disaster in response to the floods.

Last week's floods left more than 400 people dead and at least 63 missing. Thousands more were left homeless after about 4 000 houses were destroyed. 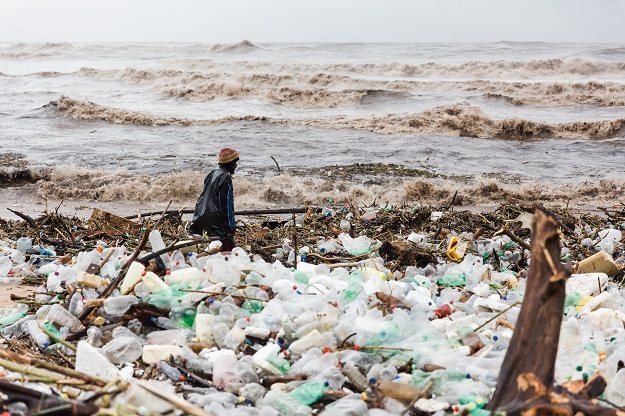 A man is seen searching through debris at the Blue Lagoon beach following heavy rains and winds in Durban.
RAJESH JANTILAL / AFP

Dlamini-Zuma said that as mop-up operations continue, rebuilding must be done in a better way.

Dlamini-Zuma added that the government was doing all it could to find missing people.

The minister said the state of disaster had been gazetted and would be implemented for three months. An assessment will be done after three months to decide whether to extend it.

"It can be terminated early if there is a need."

She added that the floods did not only affect KwaZulu-Natal, but parts of the Eastern Cape too.

"The impact of these floods are well beyond the province. So it became very important that the national government come on board. The declaration, in a way gives, hope and is a vessel for coordination and rallying the entire government and international support."

She added that the state of disaster strengthened the national government's intervention.

"It does not mean that now provincial government can relax. They must still do their work. It signals that the government as a whole intends to deal with this severe weather in a holistic manner, in an integrated approach."

All spheres of government will work together to assist those affected by floods she said.

"These teams are being activated as we speak. They will be replicated at provincial and municipal levels."