Level 4: Waiter loses job a second time because of lockdown 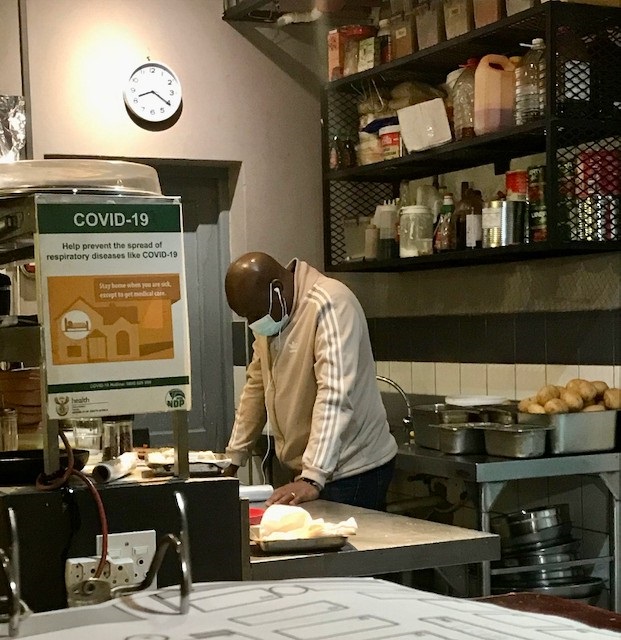 This restaurant manager’s body language says it all. This photo was taken at the Fat Cactus in Gardens, Cape Town, while watching President Ramaphosa’s address to the nation on Sunday night, when he announced that restaurants may now only serve takeaways. Photo: Kaylee Bush

For the second time, Tatenda lost a restaurant job because of the Covid-19 pandemic.

"I almost cried when President Cyril Ramaphosa announced the ban on Sunday night," says Tatenda, who only wants his first name used.

He was working as a manager at Riverine Rabbit before it closed after the first lockdown last year.

He then started a job as a waiter at The Shop in Sea Point and at Bao Down in Cape Town.

Bao Down is currently closed as it relocates to Green Point; it will reopen for takeaways but not yet table service after Level 4 restrictions that came into effect on Sunday. The Shop says it will not reopen.

His wife gave birth to a boy during the hard lockdown in March 2020.

"He came at the time I had lost my income," says Tatenda.

My wife is working, but living on a single income is difficult. We are renting a one-bedroom flat in Goodwood for R6 800. We need R3 000 to pay the person, who is helping with the baby, and money for baby diapers, formula, electricity and groceries. I was hoping to buy groceries this week when I got paid. We were looking forward to this week's earnings to cover other expenses.

Tatenda feels the restrictions are too harsh.

He says if social distancing rules are strictly enforced, alcohol banned, and the space well-ventilated, restaurants could have continued operating.

"Waiters are depressed. They are now sitting at home with no source of income. The morale is low. The government could also assist restaurants with relief funding to avoid the closing down of restaurants," he said.

On Monday, Western Cape MEC for finance and economic opportunities, David Maynier, called for the national government to provide support for businesses whose operations are limited or shut down by the adjusted Level 4 restrictions.

He said he had written to Minister of Employment and Labour Thulas Nxesi to reopen the UIF Covid-19 Temporary Employer-Employee Relief Scheme (TERS) scheme.

"Many businesses, particularly in the hospitality and liquor sectors, have already been hard-hit with significant job losses during the Covid-19 pandemic. Wine farms, restaurants and coffee shops cannot survive on takeaways alone.

"Two weeks of no income for these businesses, as well as cinemas, gyms, casinos, conferencing venues and theatres, will have a direct and sudden impact on people's livelihoods, their ability to pay salaries, rent and buy food," said Maynier.

*Correction on 2021-07-01 08:38 This article was corrected as follows: The sentence: “Bao Down is currently closed after Level 4 restrictions came into effect on Sunday” was replaced with: “Bao Down is currently closed as it relocates to Green Point; it will reopen for takeaways but not yet table service after Level 4 restrictions that came into effect on Sunday.”

Here are the Daily Lotto numbers
Full list of lottery results
Voting Booth
Have you and your family been counted in Census 2022?
Please select an option Oops! Something went wrong, please try again later.
Yes
47% - 4104 votes
No
53% - 4579 votes
Previous Results
Podcasts
PODCAST | The Story: Teen who murdered his mother gets 25 years behind bars