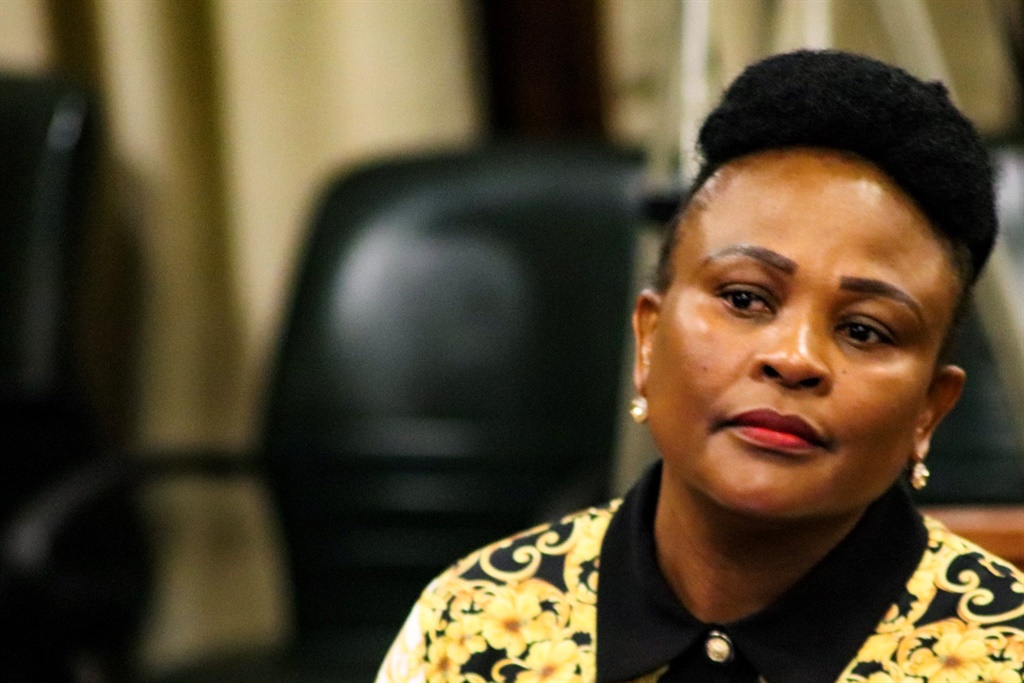 Public Protector Busisiwe Mkhwebane listens to MPs questions at a meeting of the Portfolio Committee on Justice and Correctional Services on Friday. (Jan Gerber/News24)

Mkhwebane and her investigators also did not take reasonable steps to find, interview and obtain evidence relevant to the investigation, leaving major gaps in their knowledge of affairs at SARS.

As part of an investigation into various allegations including whether it operated a "rogue" intelligence unit and whether the unit conducted unlawful intelligence operations Mkhwebane:

- Never interviewed a single member of the unit, or its direct manager, Johann van Loggerenberg.

- Lied in her report, saying she could not find Van Loggerenberg when he had in fact contacted him via his lawyers just a month before her report was finalised.

- Selectively used and ignored portions of evidence to bolster her findings, while ignoring other sections of the same evidence where it contradicted her findings.

At the time, the intelligence unit, most recently named the high risk investigations unit (HRIU), was born, Gordhan was the commissioner of SARS.

An initial examination of the Rule 53 record, which Gordhan complained remains incomplete, shows serious gaps in the Public Protector's investigation, imperilling her report which was billed as a conclusive effort to determine the fate of the so-called rogue unit once and for all.

News24 has sought to highlight issues with the Rule 53 record that were not addressed by Gordhan in court papers, which deals with numerous challenges including jurisdiction and rationality of Mkhwebane's findings.

Here is what we found:

The four men congregated on March 19, 2015, and Lombard and De Waal "confessed" to Moyane about the planting of covert bugs in the Scorpions' offices in 2007.

This case has resulted in Van Loggerenberg, Ivan Pillay and Andries Janse van Rensburg being charged by the National Prosecuting Authority, and the case is continuing.

But a deeper analysis of the recording reveals that another key finding by Mkhwebane - that the unit procured spying equipment - is directly contradicted by Lombard and De Waal.

De Waal at one point tells Moyane that members of the unit bought two-way radios at Makro to be used on surveillance operations (such as following abalone and tobacco smugglers) because Van Loggerenberg refused to approve the use of SARS money for the radios.

Lombard tells Moyane about the equipment being mentioned by various investigators was in fact purchased for SARS' anti-corruption and security unit - a totally separate unit within SARS.

The unit is also responsible for catching corrupt SARS officials in the act, as well as providing security to SARS.

Mkhwebane simply ignores this revelation by Lombard in the same recordings she relied on to reach her findings.

Former SARS official Keletso Manyike made headlines shortly after Mkhwebane's report was released when the Sunday Times reported he was a "key witness" in the probe.

The report also quoted Manyike as saying that he was never contacted by Mkhwebane's office. But the Public Protector, responding to media queries, confirmed it had met with Manyike twice.

The Rule 53 record reveals that Manyike lodged a complaint with the Public Protector in 2012 over various issues, which included a vague allegation of a "ghost" structure within SARS.

He attached an unsigned document titled Memorandum on SARS, which sets out similar allegations as contained in the Snowman dossier, authored by Mike Peega, a disgruntled former member of the unit who was fired from SARS for his 2008 arrest on rhino poaching activities.

Pillay deals with the numerous, anonymous "dossiers" that had been drafted over many years (since at least 2003) in attempts to discredit SARS in an affidavit in a separate review application.

This memorandum is one of them, and Pillay reveals that Manyike and Peega were operating in tandem with other employees

Evidence of the two meetings with Manyike, however, is conspicuously absent from the Rule 53 record filed by Mkhwebane.

News24 previously reported how parts of a charge sheet against three former SARS officials (Van Loggerenberg, Pillay and Janse Van Rensburg) on charges relating to the planting of covert bugs in a prosecutor's offices in 2007, was seemingly copied and pasted into Mkhwebane's report with minor alterations.

Mkhwebane states in her report and on the index to the Rule 53 record that she had relied on the "final" KPMG report dated December 4, 2015.

Global audit firm KPMG was hired by former SARS commissioner Tom Moyane in 2015 to delve into the allegations surrounding the HRIU.

Mkhwebane does not even mention this cataclysmic event in her report, but relies on the KPMG report as a reliable source of information.

Even more surprisingly, the version of the KPMG report Mkhwebane relied on, is dated September 3, 2015 - the same version that was leaked to the media at the time - but this is not the final version KPMG provided to SARS and others in December 2015.

Perhaps the most damaging problem to come to light is the fact that Mkhwebane claims in her report that the Public Protector was unable to reach Van Loggerenberg as he no longer resided at his last known address.

In the executive summary, she states: "During the investigation process, I also tried to subpoena information and documentation from Mr Van Loggerenberg but to no avail as his last known residence has new occupants allegedly having relocated some years ago."

Less than 30 days before the report was released, however, Van Loggerenberg's attorney’s wrote to Mkhwebane on June 14, 2019, demanding she withdraw and apologise for comments she made about the "rogue unit" during a speech at an Mpumalanga Sheriffs event.

Mkhwebane's attorneys responded to the letter on June 17, 2019.

Yet, Mkhwebane claimed she could not reach Van Loggerenberg despite corresponding with him through attorneys.

He has consistently and publically denied the rogue unit narrative, and was potentially the best-placed person to provide Mkhwebane with information and documents that would have placed her in a position to reach logical and fair findings.

Mkhwebane was asked to comment for this story, but did not respond.

We live in a world where facts and fiction get blurred
In times of uncertainty you need journalism you can trust. For only R75 per month, you have access to a world of in-depth analyses, investigative journalism, top opinions and a range of features. Journalism strengthens democracy. Invest in the future today.
Subscribe to News24
Related Links
Classified 'rogue unit' report should be public - Mkhwebane backs EFF in opposing State Security...
Three former senior SARS officials back in 'rogue unit' saga
Moyane knew SARS unit wasn't rogue, recordings show
Next on News24
LIVE | Covid-19 in SA: Cases rise by 3 789 as death toll goes up by 47

Here are the results for the Daily Lotto draw
Full list of lottery results
Lockdown For
DAYS
HRS
MINS
Voting Booth
Matric results are out! Are you happy with your child's result?
Please select an option Oops! Something went wrong, please try again later.
No, the pandemic really messed up their ability to focus
34% - 932 votes
Yes, they did well given the circumstances
66% - 1791 votes
Previous Results
Podcasts
LISTEN | The Inge Lotz Story - a miscarriage of justice