WRAP | 'We remember him with a smile, the type of smile he would've flashed around' - Ramaphosa

Archbishop Emeritus Desmond Tutu's coffin is leaving the cathedral to be transported to where he will be cremated. Archbishop Thabo joins the Tutu family in thanking you all for the support and messages of condolences. There will be a private cremation, followed by the internment of the mortal remains of the Arch in his final resting place in the cathedral.

Ramaphosa: “His was a life lived honestly and completely. He has left the world a better place... We remember him with a smile, the type of smile he would've flashed around. And we say farewell father, servant of God."

Ramaphosa: "Archbishop Tutu leaves a formidable legacy and we are enormously diminished by his passing."

Ramaphosa: “This term rainbow nation that he bequeathed is the greatest gift to our nation. When he first spoke about us as a rainbow, South Africa was a different place and going through a dark time.”

Ramaphosa: "Archbishop Desmond Tutu was our moral compass, but he was also our national conscience. Even after the advent of democracy he did not hesitate to draw attention, often harshly, to our shortcomings as leaders of the democratic state. He saw our country as a rainbow national emerging from the shadow of apartheid, united in its diversity with freedom and equal rights for all."

Ramaphosa: "We have many images of him speaking to crowds. He was a man with the faith as deep as it was abiding. Opposing injustice, standing up for the oppressed and defying unjust laws was Gods work. Destiny had anointed him as a champion of the immortal cause of justice."

Ramaphosa: "Archbishop Desmond Tutu was a crusader for freedom, justice and peace. Climate activists LGBTQIA+ groups have paid homage to the man that has given freedom. A humble and brave human being who spoke for the oppressed downtrodden and suffering of the world."

"There are only a few among us, the rarest of souls, who attain the stature of global icon during their lifetime. In our modern age, this term has come to be associated with celebrity and social media fame. Yet if we are to understand a global icon to be so someone with great moral statue, of exceptional qualities and service to humanity, there can be no doubt it refers to the man we are laying to rest today," said Ramaphosa.

After more prayers and hymns, those in attendance now sing the national anthem. President Cyril Ramaphosa is due to give the eulogy afterwards.

The Soweto Gospel Choir is now performing by video link.

Nuttall: "Voice of the muted multitude, son of the dark mysterious land. Called at the height of crisis to the Cape of Storms to transform it into the Cape of Good Hope.”

"Small person of the past becoming great in the unfolding purposes of God," said Nuttall.

"Love kindness. This was our arch at his very best. His was not a harsh ideological quest for justice. Always it was grounded in mercy," said Nuttall.

"Desmond and I became close. He was Archbishop of Cape Town, and I was Dean of Natal. Our partnership struck a chord a dynamic black leader and his deputy we were a foretaste in a divided nation," he said. Archbishop Desmond Tutu was part of the committee that assisted in planning his funeral. Among his wishes were that the service not be filled with any speeches. President Cyril Ramaphosa will deliver only the state eulogy.

"The most striking common thing people have said is that when they were in the dark, he brought the light. He was the light of Christ,” Welby said.

Reverend Justin Welby, the Archbishop of Canterbury, is now giving a video tribute to the late archbishop.

"We shared him with the world, and you shared part of the love you had for him with us. We are thankful that all of you have gathered in your many places, in person or via the wonders of technology, to celebrate daddy's life this week.

Reverend Naomi Tutu, the daughter of the late archbishop, speaks on behalf of the Tutu family.

"I am here to convey our thanks. I want to first apologise as a family we have received many messages and we haven't been able to respond. We have just been overwhelmed," she said.

The choir is being streamed in via video link.  They are singing “Great is thy faithfulness"

Reverend Michael Weeder, the Dean of Cape Town, welcomes both those who are in the cathedral and those watching from home, acknowledging that many more would have wanted to attend the funeral but were unable to due to the pandemic.

The funeral has begun with the first procession and processional hymn.

The king of Lesotho, His Majesty Letsie III, has arrived at the Cathedral for Tutu's official funeral service. President Cyril Ramaphosa has arrived at the St. George's Cathedral ahead of Archbishop Desmond Tutu's official funeral this morning. Let us take to heart the words of Archbishop Emeritus Desmond Mpilo Tutu: "Do your little bit of good where you are. It is those little bits of good put together that can overwhelm the world". As we welcome in the new year, I wish you all joy, happiness, prosperity and peace. pic.twitter.com/yZHlWFPaLK

A large media contingent has gathered outside St George’s Cathedral for the funeral service of the late Archbishop Emeritus Desmond Tutu in Cape Town. 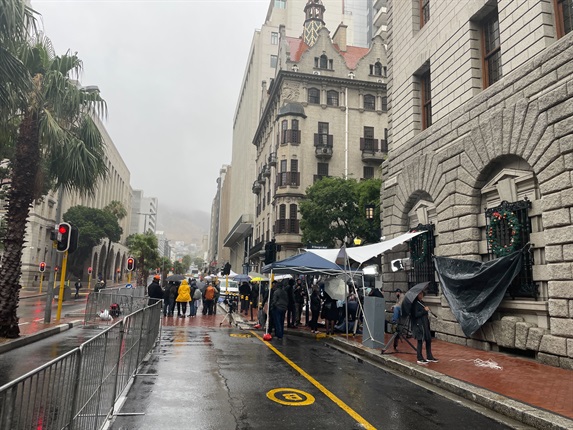 The City of Cape Town said motorists have been advised to find alternative routes or avoid the cathedral precinct entirely, if possible. "A number of roads, including Wale and Adderley streets, will be closed on Saturday," it added in a statement.

A viewing space has been made available on the Grand Parade for the funeral service of the late archbishop. Access to this area will be via the entrance to the Grand Parade along Castle Street.

The City said there would be no general public access to the area around the cathedral.

The requiem mass will start at 10:00 at St. George's Cathedral where, for years, Archbishop Desmond Tutu used the pulpit to rail against a brutal white minority regime.

Famous for his modesty, Tutu gave instructions for a simple, no-frills ceremony, with a cheap coffin, donations for charity instead of floral tributes and an eco-friendly cremation.

President Cyril Ramaphosa will deliver the eulogy and then hand over the national flag Mam Leah Tutu.

Capetonians will brave the rain on Saturday to pay their last respects to the late Archbishop Emeritus Desmond Tutu at the St George’s Cathedral.  Members of the public were set to view proceedings at the grand parade - but a heavy downpour may hamper this. - The official funeral of Archbishop Emeritus Desmond Tutu will be held at St George's Cathedral in Cape Town on Saturday.

- Several road closures and strict security measures have been put in place ahead of the funeral. Motorists have been advised to find alternative routes or avoid the cathedral precinct entirely, if possible. The City said there would be no general public access to the area around the cathedral.

- President Cyril Ramaphosa is expected to deliver the eulogy. TAP HERE FOR THE COLUMN

St. George’s Cathedral is a hive of activity. Archbishop Emeritus Desmond Tutu will be laying for the last day in repose. So far, 2000 people have paid their last respects to Tutu. Close friends of Archbishop Emeritus Desmond Tutu gathered in honour of him at an intimate event.

TAP HERE FOR THE VIDEO

Archbishop Emeritus Desmond Tutu will lie in repose at St George's Cathedral from today to give mourners more time to pay personal tribute. The Arch's funeral will take place at the cathedral on Saturday.

The cortege (solemn procession) of the late Archbishop Emeritus Desmond Tutu, will arrive at the West Door of the Cathedral shortly after 09:00 today.

The cortege will leave Hertzog Boulevard and travel along Adderley Street into Wale street to the Cathedral.

The National Joint Operational and Intelligence Structure (Natjoints) is pulling out all the stops to ensure that the funeral of Archbishop Emeritus Desmond Tutu this weekend is "safe and secure".

TAP FOR THE FULL STORY

Long queues formed outside St George's Cathedral on Thursday as members of the public flocked to pay their last respects to Archbishop Emeritus Desmond Tutu.

The event has ended
Go to top
We live in a world where facts and fiction get blurred
In times of uncertainty you need journalism you can trust. For only R75 per month, you have access to a world of in-depth analyses, investigative journalism, top opinions and a range of features. Journalism strengthens democracy. Invest in the future today.
Subscribe to News24
Next on News24
LIVE | Covid-19 in SA: Cases rise by 4 514 as death toll goes up by 20