Here's a brief rundown of the day:

Just after 10:00 this morning police fired stun grenades and water cannons at EFF supporters as they marched up a road headed toward Brackenfell High School.

The bone of contention at this stage was due to the number [of protesters] exceeding the agreed upon number of 100 participants.

Said Pambo: "It's a protest. Where have you seen where people are protesting they are being told 'no, only 100'. There's no such thing. It's a protest."

By 16:00 the EFF's supporters waited at pick up points around Brackenfell for their transport home. Police wound the barbed wire back in again, and armoured vehicles trundled back to their depot.

A block away from the school, ducks waddled across the road and a woman watered her garden, in contrast to the angry scenes nearby earlier.

- Reports by Tammy Petersen and Jenni Evans at Brackenfell on Friday. 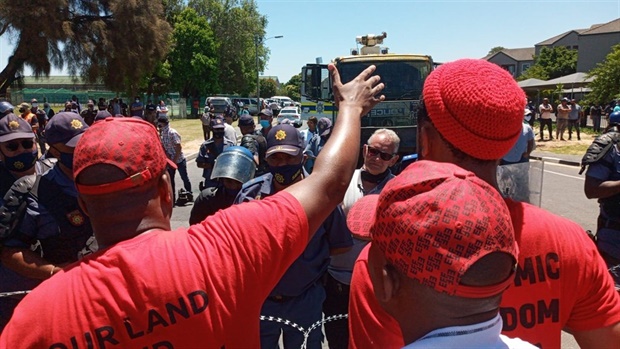 Police are packing up at the school. Three women with EFF supporters among the first to walk past BrackenfellHigh school. After a dramatic day, they pass unhindered. There's also lady reading the Bible through the gate.@TeamNews24 pic.twitter.com/9kJt0BhmNf

The man beaten in the brawl has been arrested. Two women are being treated by medics after inhaling teargas. #EFFinBrackenfell (@TammyPetersen87) pic.twitter.com/qzB73OojXw

People under the tree near #brackenfellhigh are shaken out of their discussions about current affairs as stun grenades boom in the distance again. Sirens wailing. @TeamNews24 pic.twitter.com/d2ft90fnqP

Stun grenades fired after a white man attempted to address SG Marshall Dlamini and was beaten by people in the crowd who ask him, "What are you doing here?" #EFFinBrackenfell (@TammyPetersen87) pic.twitter.com/PYMllbNJ6q

EFF SG Marshall Dlamini says #BrackenfellHigh has 7 days to remove teachers and SGB members it says had attended the contentious dance. "If not, that high school will be the permanent residence of the EFF." #EFFinBrackenfell (@TammyPetersen87) pic.twitter.com/ITSplH56Gk

EFF SG Marshall Dlamini says racists, white supremacists, capitalists are their enemies.
"We are not the children of Nelson Mandela; we are running a revolution." @TeamNews24 #EFFinBrackenfell pic.twitter.com/6mgr1u8CMY

Despite clashes between police and EFF members during a protest outside Brackenfell High School in Cape Town on Friday, chairperson of the SGB, Guillaume Smit said that matrics proceeded to write their exams in peace.

EFF members singing and chanting for racists to run. They are gathered in Frans Conradie Drive, near #BrackenfellHigh. #EFFinBrackenfell (@TammyPetersen87) pic.twitter.com/0nh9KlUbQq

As at 13:00, it seems the standoff between police and hundreds of EFF supporters continued as leaders try to negotiate an increase to the allotted number of protesters. Police used stun grenades and teargas for the second time at around 12:30 as the impasse continues. EFF SG Marshall Dlamini and spokesperson Vuyani Pambo approached police outside Brackenfell High School on Friday. Dlamini asked that the group be allowed to move forward under police watch. Police said only 100 protesters will be allowed.

A standoff at the intersection as a police helicopter hovers. #EFF #brackenfellhigh @TeamNews24 pic.twitter.com/vjv4Th5MwT

SAPS have once again displayed what we always say, "Black life is cheap"

The last time we were here they stood by and watched a Black woman being beaten with a bat.

Today they are quick to shoot water cannons and firing stun-grenades at a peaceful protest #EFFInBrackenfell pic.twitter.com/WVzj6Gqt5L

Police fired stun grenades and teargas, to disperse a large group of EFF supporters during their protest at Brackenfell High school in Cape Town on Friday. The EFF had been granted permission by the City of Cape Town for 100 members to protest outside the school.

Police now saying 500 EFF protesters will be allowed through, calling for calm over a loudhailer. (@TammyPetersen87, Twitter) 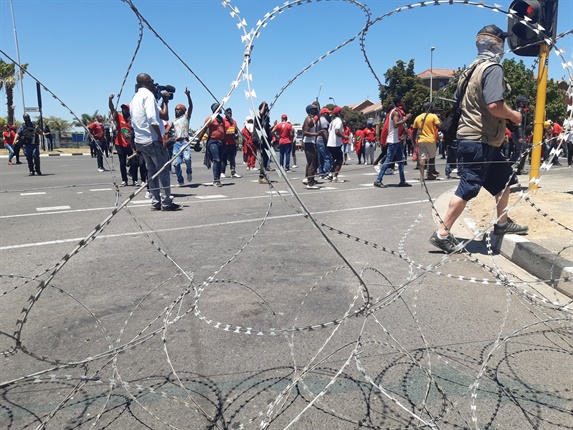 Tear gas stun grenades on way to Brackenfell High. People are crying but still running to the school. Sorry my eyes are burning. (@itchybyte) pic.twitter.com/hDPASUkAMS

A policeman is picking stones and pieces of debris in the road as the EFF waits for greenlight amid a huge police presence to go to Brackenfell High. Cops near the intersection checking media credentials and asking anyone not media or a protester to clear the area. (@itchybyte, Twitter)

EFF spokesperson Vuyani Pambo says all present will march to #BrackenfellHigh. "No one is going to stop us. We are going to go there nicely, peacefully. Anyone who comes at us, we will go at them."@TeamNews24 #EFFinBrackenfell. pic.twitter.com/DvAsm1hNwH

As the EFF continued to negotiate passage with police, EFF spokesperson Vuyani Pambo spoke to News24 and other media.

Pambo said: "We are simply saying, we are all going to march, all of us to the school there. That is what we are going to do.

"No one is going to stop us. We are going to go there nicely, peacefully. Anyone who comes at us we will go at them.

"It's a protest. Where have you seen where people are protesting they are being told 'no, only 100'. There's no such thing. It's a protest - let's get it right.

"As such, it cannot be regulated like a gathering of a party or people drinking. "No, it's a protest that comes from a grievance.

"Those things of only 100 (protesters) you will only hear from them. We are protesting. And a protest can't be told by those we are protesting against, how to protest.

"They can't klap us and tell us we must smile now. We are not going to smile. We are going to return the klap."

Police on the scene had previously maintained that only 100 protesters would be allowed based on the agreement by the City of Cape Town. The leaky water cannon idling near the police and EFF near Brackenfell High School. (@itchybyte, Twitter) A sign reads "Bring back our beret" with an expletive. More EFF supporters have arrived as the group swells. #EFFinBrackenfell (@TammyPetersen87) pic.twitter.com/6Rk8FeFewW

We are prepared to die in defense of our rights, in defence of our democracy. #EFFInBrackenfell pic.twitter.com/1LaAdQhoNf

The second group is massing on the grass near the library. About 100 people more, also singing, carrying flags waiting to go to #Brackenfellhighschool. (@itchybyte) pic.twitter.com/4OwsKgFHC6

EFF supporters have regrouped next to the Brackenfell library, their numbers swelling in the heat.

The EFF's Marshall Dlamini has arrived and is negotiating passage with police to handover a memorandum to the school.

The group is being held by a heavy police line between two shopping centres on the other side of the main carriageway that turns off to the school.

It has been reported by eNCA that the reason for the use of force by police was due to the number exceeding the agreed upon number of 100 participants.

Police asked a group of residents and members of the Cape Party, who had gathered outside Brackenfell High School on Friday morning to disperse. This as only the EFF had been granted permission by the City of Cape Town for 100 members to protest outside the school.

EFF SG Marshall Dlamini and spokesperson Vuyani Pambo speak to police. Dlamini wants to negotiate and for the group to be allowed to move forward under police watch. SAPS saying only 100 allowed. #EFFInBrackenfell @TeamNews24 pic.twitter.com/IZTTtZrbsW

The EFF's Marshall Dlamini negotiates passage to hand over a memorandum at #brackenfellhigh (@itchybyte) pic.twitter.com/DO3vu8SXB0

The street towards the station is filling up and impatience is rising. #EFFInBrackenfell (@itchybyte) pic.twitter.com/LhTzBG28Pv

About 400 people from the EFF toyi-toying in the blazing sun as police hold them away from BrackenfellHigh during exam. (@itchybyte, Twitter)

Singing with a human cordon by the EFF near #Brackenfellhighschool @TeamNews24 pic.twitter.com/0nKkXFcuT1

Brackenfell residents, police as well as members of the Cape Party gathered outside Brackenfell High school in Cape Town on Friday, ahead of the EFF's arrival. The party was granted permission to protest outside the school.

About 300 EFF supporters sing Senzeni na as a helicopter hovers over near Bracken Manor shops about a block from the High School. #Brackenfellhighschool (@itchybyte) pic.twitter.com/G4pBm2cIiu

There are a few stones left in the road after the first police-EFF confrontation near Brackenfell High School. (@itchybyte, Twitter) There is a strong police and private security presence outside Brackenfell High School this morning. EFF members are returning to the school for a protest against racial discrimination. eNCA's Ronald Masinda is on the scene. Courtesy #DStv403 pic.twitter.com/rhSnPBOSbc

Police fired stun grenades and water cannons at EFF supporters as they marched up a road headed toward Brackenfell High School.

According to eNCA, hundreds of EFF protesters arrived in the area via bus and marched up one of the roads headed toward the school.

News24's Jenni Evans is now on the scene. Police have regrouped and are asking all bystanders to move from the area.

Quintin Pretorius, a parent of one of the pupils who says he is here in his personal capacity, says he won't leave despite police warning that they would have to disperse as only the EFF has a permit.He says he's worried that property and homes will be damaged. #BrackenfellHigh pic.twitter.com/SWrwEC1OS6

#BrackenfellHigh People who have gathered on the opposite end of the street, believed to be locals, have been warned to disperse by 10:00. Cape Party leader Jack Miller says they are seeking legal advice as they should have the right to observe. @TeamNews24 pic.twitter.com/H3hnEy5umQ

Barbed wire being laid in Rogland Street, in which #BrackenfellHigh is situated. @TeamNews24 pic.twitter.com/lcGDFp65cO

An EFF supporter has come up all the way from Marikana to #BrackenfellHigh. Tweet from @itchybyte

Go to top
We live in a world where facts and fiction get blurred
In times of uncertainty you need journalism you can trust. For only R75 per month, you have access to a world of in-depth analyses, investigative journalism, top opinions and a range of features. Journalism strengthens democracy. Invest in the future today.
Subscribe to News24
Related Links
Mmusi Maimane | Brackenfell: Race relations are taking profound strain due to poor leadership
Brackenfell braces for protest as EFF says it has followed all processes
WATCH | Stun grenades used to disperse PAC protesters in Brackenfell
Next on News24
LIVE | Covid-19 in SA: Cases rise by 2 597