We adjourn until next week.

Oldwadge wraps up, after accusing "someone" of "fiddling" with the documents attached to Stofile's statement. Hellens has no questions and the state does not want to re-examine Stofile.

Oldwadge now suggests that the R12.4 million paid to Nulane was a "mobilisation payment". Stofile says he has not heard of this term, prompting scorn from Oldwadge. Stofile says different terms are used interchangeably and says that, if Oldwadge means an advance payment, he would agree.

Stofile was called to begin the state's efforts to get financial documents related to Nulane admitted into evidence. He was not at the department at the time that the Nulane transactions happened. Oldwadge is however attempting to push him on the amounts invoiced and paid to Nulane and the circumstances that surrounded them.

Oldwadge has spent some time questioning Stofile about how the alleged Nulane payments were defined and processed. He gets Stofile to confirm that Nulane was defined as a "non contract".

Oldwadge now moves on to Nulane's "commercial proposal", which he says was "amended". Stofile says he does not know the background of the report and cannot comment on whether it was amended or not.

Oldwadge now asks Stofile if he knew a certain department official who served as a deputy director of financial accounting.

Oldwadge asks Stofile if the Nulane contracts appear to be dated 28 October 2011. Stofile agrees. Oldwadge then puts it to Stofile that he does not know who sent the Nulane invoices and how they arrived at the department. He agrees that he does not. (Patel is clearly attempting to distance himself from Nulane's activities).

Stofile confirms that documents in support of a payment are loaded, they are loaded at the finance department.

Kenny Oldwadge, who is defending Sharma's brother-in-law and Nulane representative Dinesh Patel, is up next. He puts it to Stofile that he should be expected to have solid experience and expertise in supply chain management. Stofile agrees.

Willem Edeling SC, who is representing former Free State Agriculture Department Chief Financial Officer Seipati Dhlamini, is asking Stofile if he found any payment confirmation documents. He responds that he did not find any.

Ishmael Semenya SC, for former Free State agriculture department head Limakatso Moorosi, gets Stofile both to confirm that the Mohoma Mobung was a voted fund and to state that he cannot speak to the authenticity of the documents he has testified about. Semenya concludes.

Mantsha points out that the state has previously led evidence that Nulane was paid R12.4 million on 6 October 2011 - the same day that the deviation was granted. Stofile has however made reference to financial documents that shows a R12.4 million payment to Nulane on 4 November 2011 at 18:23.

As yet, we have no explanation for the discrepancy.

Mantsha appears to be arguing that the invoice in question was for the final Nulane feasibility report, which he says was delivered on 12 March 2012.

He argues that someone in the department had to certify that services had been rendered. It was in this context that Mantsha signed the invoice, he says.

Daniel Mantsha, for Thabethe, tells Stofile that he needs to ask him questions about two documents: the first being the Nulane tax invoice allegedly signed by Thabethe.

Stofile also makes reference to a final report for due diligence on selected projects identified by the Free State department of agriculture and rural development dated 12 March 2012. It is not clear whether this the report that Nulane was paid R24.9 million for - but logos for Deloitte, Nulane and the Free State government department appear on the front page.

Stofile now refers to evidence that we haven't heard about before:

A "commercial proposal summary" by Nulane for the Mohoma Mobung project. It was signed in Sandton on 23 February 2012 - several months after Nulane had been paid R12.4 million by the department. The signatory on that document is Iqbal Sharma's brother-in-law and Nulane representative Dinesh Patel. Signing for the agriculture and rural development department on 2 March 2012 in Bloemfontein is Peter Thabethe, then Free State agriculture HoD.

Stofile confirms that he found a "deviation submission to appoint Nulane" at the finance department. This is the deviation request that Cezula and Mahlangu previously gave evidence about.

Serunye now points out that another Nulane invoice - for over R8million - has different banking details on it. These details contain reference to a Bank of Baroda account. Bank of Baroda was used by members of the Gupta network previously implicated in the alleged Vrede Dairy Project scam.

Important: Former Free State agriculture department head Peter Thabethe - who is also on trial for the alleged Vrede Dairy Farm scam - has sought to distance himself from the deviation request (that he signed) that enables Nulane to receive an expedited R12.4 million payment from the department.

The fact that he appears to have signed off on another R4 million payment for the company will be used by the state to attack that defence.

Stofile refers to a 7 December 2011 invoice from Nulane Investments to the department for R4.16 million. As Serunye displays these invoices on a screen, Stofile reads out the dates, amounts and bank details written on them.

State advocate Peter Serunye takes Stofile through the payments made by the Free State agriculture department to Nulane. Stofile is taking the court through various payment stubs, which record payments made by the department to Nulane between 2011 and 2012. 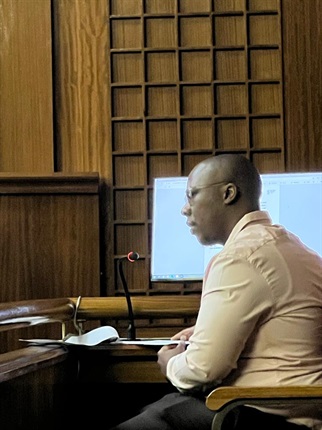 Stofile testifies that he found invoices from Nulane. These invoices had certain documents attached to them, which he says were necessary to process payment. He says he thinks he found two invoices and two system printouts.

Stofile now reads out the title of the department's contract with Nulane. It is provisionally admitted as evidence - pending the testimony of the official who had it.

This testimony is clearly intended by the state to address complaints from the defense that the authenticity of certain of the documents it is relying on as evidence has not been proven.

Stofile says he found a copy of the contract and the Nulane feasibility study report at the HoD's office.

Stofille says he initially could not find the documents sought by the police in the supply chain management department and sought help from the head of department, who asked the department's Chief Financial Officer for help. Stofile says he managed to find some payment documents in the finance department and relied on a system print out to track down others.

Stofile was a director of supply chain management at the Free State agriculture department after the alleged Nulane fraud took place. He was present, however, when the Hawks conducted a search and seizure raid on the office.

Stofile says he assisted the police in tracking down various tender documents and documents related to Nulane payments.

Defence advocate Kenny Oldwadge, who this morning successfully argued for a postponement of the testimony of former Deloitte employee Thomas Church. Nulane accused Iqbal Sharma talks to his lawyer during the break. We are breaking until 10:30 so that the state can call another witness.

Oldwadge says the state's "flimsy" excuse for providing that draft report now was that Church only recently found the draft report.

"I will not voluntarily walk into an ambush," Oldwadge says.

Oldwadge says his application is a consequence of what happened after the trial adjourned yesterday and the defence was approached by Serunye. He says the prosecutor handed him a copy of a draft Deloitte report, the contents of which he declines to detail.

Prosecutor Peter Serunye tells acting judge Nompumelelo Gusha that the state intended to call Church, but says Oldwadge wishes to "make an application before we proceed".

We are back on the Free State High Court in Bloemfontein this morning, where a big battle is brewing over evidence that was provided to the defence yesterday - in connection with testimony that is supposed to be given by Thomas Church, a former employee at Deloitte.

He is being called to testify about how Nulane Investments allegedly changed a draft feasibility study on the Mohoma Mobung initiative to identify Paras – an Indian dairy farm allegedly linked to the Guptas – as the most suitable implementing partner for setting up a milk processing plant in Vrede, Free State.

This, the state claims, enabled the Vrede Dairy farm scam, which looted millions intended for poor black farmers. The state yesterday provided the defence with the Deloitte draft report (pre alleged Nulane changes) and advocate Kenny Oldwadge, for Nulane Investments representative Dinesh Patel, is expected to argue that this amounts to an "ambush".

'You shouldn't be a 204 witness': Defence lawyers argue Nulane whistleblower exposed no crime

- The NPA's first state capture trial began this week, in which former government officials and Gupta associates are being tried in connection with the alleged R24.9 million Nulane fraud.

- It is the State's case that the Free State agriculture department paid R24.9 million to Nulane Investment for a fraudulent feasibility study.

- Free State agriculture department official Shadrack Cezula testified that he was placed under "unbearable" pressure to ensure that Nulane received a R12.4 million payment from the department.

Cezula is excused. We adjourn until 09:30 tomorrow.

Oldwadge asks for an opportunity to ask Cezula if he was aware that some work related to the Nulane contract had already been done (by Deloitte) in September 2011, prior to Nulane being paid, as a result of the deviation.

Cezula says Dhlamini's claims that she did not dictate the deviation application to him are "incorrect".

Go to top
We live in a world where facts and fiction get blurred
In times of uncertainty you need journalism you can trust. For 14 free days, you can have access to a world of in-depth analyses, investigative journalism, top opinions and a range of features. Journalism strengthens democracy. Invest in the future today. Thereafter you will be billed R75 per month. You can cancel anytime and if you cancel within 14 days you won't be billed.
Subscribe to News24
Next on News24
ANALYSIS: The fall of Johannesburg's coalition shows that parties need to grow up