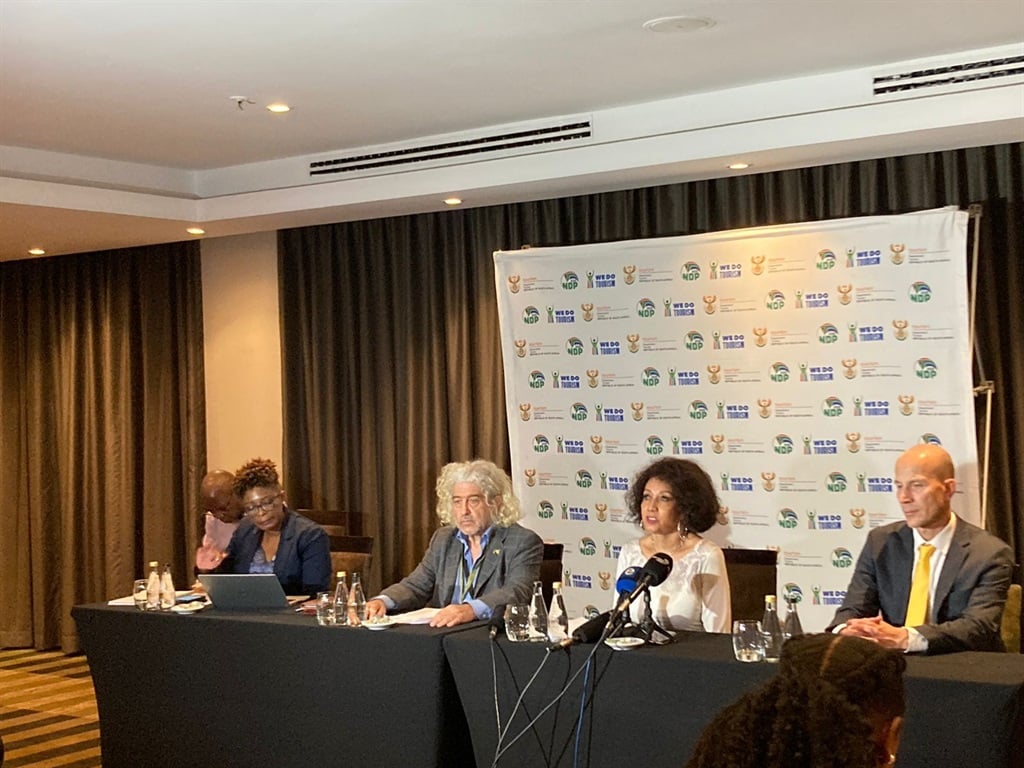 The briefing has ended...

Sisulu refused to entertain questions on the impact of load-shedding on tourists and tourism. She says this would take away from the current incident.

Sisulu says a recent study commissioned by the department shows that tourism is recovering well after the pandemic. "We are a people who love other people. That is the image we want people to have."

SA is violent, but special attention is dedicated to tourist attractions to ensure their safety. Their safety is paramount for the industry.

The department advises tourists on which areas are safest and least so to prevent such incidents. SA has only had three tourist deaths in 27 years. "This is a record of safety. For tourists, we provide maximum security," Sisulu.

Sisulu says SA has previously successfully addressed safety issues of tourists who complained about being followed. She says government is working hard to secure as many tourists as possible. The three arrested are being questioned about why the tourists were targeted, among other things.

Sisulu says Cele said the Kruger is a problematic area. It will either be secured or an alternative route will be introduced.

Before questions start, German ambassador Andreas Peschke thanks the police and the SA government for their swift response and investigation of the murder. "We are grateful that the government of SA gave so much prominence to dealing with this case." He says Germany is SA's third largest tourism market.

Sisulu has concluded her address. The panel will take questions.

"South Africans are a peace-loving people. It is our sincerest regret that this has happened," she says.

The minister says this incident happened as the country was bouncing back from the effects of lockdown in 2020. "This is a very sad day for us. It's a very sad day for the German people. We are very concerned about the safety of our tourism. We want to assure people that SA is a safe place."

She says: "We have given all that we can... the business chamber of tourism has made a R50 000 reward to anyone with information that could lead to arrests."

She assures the public that the government is doing what it can to curb incidents of this kind.

The minister says the man's body will be sent to Germany tomorrow.

Sisulu says a plane was hired to transport the body from Mpumalanga.

Sisulu says: "They love the country, they were happy to be here... they were upset about the reporting to the German community, and how it was relayed to the children" of the man who was killed.

Sisulu says it appears that the group of tourists were on their way back to their lodge from the park. While driving, the assailants had accosted them.

Sisulu says Bheki Cele informed her that three people have been arrested.

The tourists arrived last month. They stayed in Cape Town, Durban, Drakensburg and then Mpumalanga.

The autopsy has been done on the deceased man. His body will be repatriated on Thursday. The wife left this afternoon.

People living in the property behind that wall came out to investigate what happened. That is what caused the assailants to flee.

The car was stopped after hitting a water tank behind the wall.

The driver was shot and his body slumped over inside the car. The assailants continued walking toward the tourists' car. The driver then accidentally drove the car backwards. The hired car traveled about 100 meters backwards and veered off the street and hit a wall.

Then, the sound of the tourists' vehicle's locking mechanism was heard. This caused one of the assailants to fire a shot.

The spokesperson says the family would not like to disclose their names.

The statement says the family was with other German tourists in a vehicle. A passing vehicle then blocked off their path. Three men armed with pistols jumped out and walked toward them.

A statement by the family is being read out.

Sisulu says she met with the family, who was traumatised.

Since the dawn of democracy, only three international tourists have been killed in the country, says Sisulu. She cites the Anni Dewani case as one.

Sisulu has begun her address...

We are expecting the minister to begin speaking any moment now...

Sisulu earlier met with tourism officials and a group of German tourists who were attacked near Kruger Park.

Journalists are trickling in ahead of a media briefing on the meeting between the tourists and Sisulu.

Tourism Minister Lindiwe Sisulu will hold a media briefing over the death of a German tourist at Kruger National Park.

On Monday, a group of tourists were attacked when making their way to a lodge near the park.

A 67-year-old German tourist shot dead in the attack. The group was ambushed by armed men, who then sped off in their VW Caddy after shooting the driver through the window when he refused to open the vehicle's doors.

Sisulu's office said she skipped a Cabinet Lekgotla to spend some time with the tourists. Sisulu also met with German tourists earlier today at OR Tambo International Airport.

Sisulu's briefing is expected to start at 18:00.

Follow it live on News24
Go to top
We live in a world where facts and fiction get blurred
In times of uncertainty you need journalism you can trust. For 14 free days, you can have access to a world of in-depth analyses, investigative journalism, top opinions and a range of features. Journalism strengthens democracy. Invest in the future today. Thereafter you will be billed R75 per month. You can cancel anytime and if you cancel within 14 days you won't be billed.
Subscribe to News24
Next on News24
BREAKING NEWS LIVE | Chris Hani’s killer Janusz Walus released from prison on parole