WRAP | Enyobeni mass funeral: If you break the law, 'we will shut you down' - Ramaphosa

The funeral has concluded.

Buffalo City Metro Mayor Xola Pakati said that the ANC in the WB Rubusana region donated a tombstone for each of the 21 victims who died at Enyobeni tavern. Bhishop Andile Mbete: We must desist from displaying alcohol at home in front of the children. The refrigerator at home must be strictly used to store food, not for beers.

Mbete said nowadays parents throw a birthday party for a 1-year-old and entertain their adult friends at the party with plenty of alcohol. Mbete said children who grow up in an environment where alcohol is used carelessly, are bound to have alcohol problems. Ramaphosa: Following this tragedy, what you can be assured of is that we are going to act as the government.

Ramaphosa: This is a national crisis and we must therefore act. I am pleased that the approach displayed by the police is that of enforcing our laws. We are now faced with another national crisis. The children that have died must be a clear signal for us to take action. These deaths could have been prevented had we enforced our laws.

Ramaphosa: Much more still needs to be done to curb the abuse of alcohol and drugs by children. Alcohol can not be marketed to underage children, and alcohol distributors and traders must desist from advertising alcohol to minors.  SA is on top of the world for having heavy drinkers. This must be brought to an end. We need to become a sober nation.

What happened on 26 June was a crime, what I heard from the police minister and premier, was a chilling message.

Ramaphosa: Government can not be in every little place. Communities must support the work of the police.

Ramaphosa has called on Eastern Cape government to step up efforts and laws that regulate taverns.

"If you are breaking the law, we will shut you down. That is a promise," Ramaphosa said.

Ramaphosa said the national government will support the metro in establishing amenities.

"Alcohol is addictive and is a substance that can be abused by children," Ramaphosa said.

Ramaphosa: Scenery Park has 2 000 taverns and no recreational facilities.

Ramaphosa has called on the Buffalo City Metro and provincial government to create space and build recreational facilities so that children are not forced to hang out on street corners and at taverns.

Ramaphosa urged councillors to help out in the fight to smoke out illegal sheebeens and taverns because councillors are elected to serve communities and represent them and speak out for them. Ramaphosa added that laws must prohibit the sale of alcohol close to schools.

Ramaphosa said some taverns don't sell alcohol but sell drugs to children while some establishments are situated close to schools. He said this has to end.

Ramaphosa also commended the Eastern Cape Liquor Board for continuing to conduct inspections and monitor operations at taverns. He urged liquor boards to strengthen measures to ensure what happened at Enyobeni does not happen again.

Ramaphosa said communities must collectively bring up children, support and reprimand them, whoever the parents are.

Ramaphosa has commended BCM for having since cracked down on unscrupulous tavern owners who don't care if their venues are overcrowded.

Ramaphosa said this is a moment for the nation to confront the issue and draw the line. He said any tavern that sells alcohol to children must be closed forever and never open again, "because we can't continue losing future generations to the scourge of alcohol".

"Alcohol is highly addictive and should be used by adults in moderation and responsibility," Ramaphosa said. He added that he has received many calls for the legal age of alcohol to be lifted to 21. He said this is a debate he wants the nation to have and reach a consensus.

"We do know that the law was broken that night and probably many nights before," he said.

He also added that the tavern should not have served alcohol to children and in his view, what Enyobeni did, was outside of the law.

Ramaphosa said a tavern is not a place where young underage children should go but a place for older people.

He said it is shameful that there are people out there blaming the parents and young people for going to the tavern. He said it is still unknown what caused the deaths. He urged the public to allow doctors and SAPS to do their work.

Ramaphosa said the last words said by the youngest of the 21 victims, who was 13-year-old, were "mama, I am coming back."

Ramaphosa said the people who died at the tavern are not just numbers but people who had dreams and aspirations to serve their communities and beloved country. He described them as exceptional beings.

Ramaphosa asked those who believe he should be somewhere fixing the challenges of the country: what is more important than the lives of young children?

"These are our children, we have the absolute right to be here to come and mourn with the families. That is why we are here. I am pleased a number of Cabinet ministers are here."

Ramaphosa added: "We are here to mourn and we are here to pay condolences to the families of each and every one of the 21 bright lives snuffed out on 26 June."

The Eastern Cape health department says the toxicology report into the deaths of 21 teenagers who died at Enyobeni tavern has not been finalised.

A representative of the department, Dr Litha Matiwane, said the department's forensic pathologist services team is satisfied that the children did not die in the stampede.

Matiwane said two forensic experts accompanied by two junior medical officers visited the tavern on 26 June and found 17 bodies. Matiwane said postmortems were conducted on the bodies of the children on the same day.

Matiwane said the toxicology lab in Cape Town and the health department are in constant communication because the samples are still being analysed in Cape Town. Matiwane also added that clothing removed from the bodies of the victims has been taken to the SAPS.

He said the SAPS has sent the clothing to the Cape Town toxicology lab for further investigation.

Cele said no parent should bury their child.

Cele said the work of an investigating team, consisting of five police officers and three detectives led by a Brigadier, is at an advanced stage to ensure once someone is arrested, they don't get out due to insufficient evidence.

Police minister Bheki Cele said after the mass funeral, someone will have to answer for the deaths of the 21 children who died at Enyobeni tavern.

The Eastern Cape Liquor Board (ECLB) intends to lay criminal charges against and revoke the liquor licence of East London-based Enyobeni Tavern, where 21 young patrons mysteriously died in the early hours of Sunday morning.

The nation has been horrified by images of the bodies of those who died, strewn across the tavern dance floor, on tables and in chairs.

The owners of East London's Enyobeni tavern, Vuyokazi Ndevu, and her husband, Siyakhangela, have removed their stock of alcohol from the tavern where 21 youngsters died on Sunday.

This ahead of a massive march planned by young people on Friday.

National Liquor Traders Association said it is willing to work with police and government to ensure the tragedy that happened at Enyobeni tavern does not happen again. The association's national convenor Lucky Ntimane assured President Cyril Ramaphosa and mourners that the incident will never happen again.

Ntimane said as much as the alcohol industry was in business, it doesn't want to make a profit at the expense of the lives of people.

Ntimane said a 13-year-old cannot be mentioned in the same sentence as a tavern. He urged government and business sector to find ways to ensure children do not resort to alcohol for entertainment.

He was speaking at Scenery Park Sports Field during the mass funeral of the 21 teenagers who died at Enyobeni tavern on 26 June. 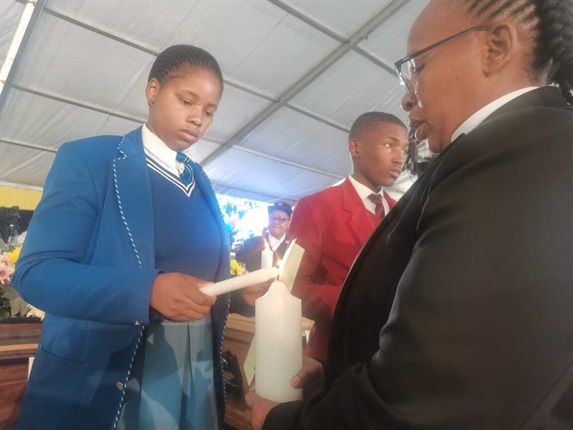 The mood is sombre inside the marquee. Emotions are running high among friends and families of the victims, well-wishers, and mourners struggling to come to terms with the loss of young lives. Mabuyane added that international partners had sent messages of condolences and solidarity. Russia, Britain, and Germany have sent messages of support to the Eastern Cape. The province has strategic partnerships with regions within the foreign countries, added Mabuyane.

Mabuyane said the tragedy could have been avoided. He said that if the government would build recreational centres, perhaps children would not need to go to taverns.

Speaking at the funeral, Eastern Cape Premier Oscar Mabuyane revealed that a shocked President Cyril Ramaphosa called him from Germany on 26 June to understand what led to the deaths of 21 teenagers at Enyobeni tavern. A funeral is under way at the Scenery Park Sports Field for the youth who died at Enyobeni tavern on 26 June. Three of the 21 victims will not be buried as part of today's mass state funeral. According to Eastern Cape Safety MEC Weziwe Tikana Gxothiwe, two victims were buried yesterday and one this morning. President Cyril Ramaphosa will on Wednesday attend the mass funeral service of 21 young people who died in the Enyobeni tavern in East London, in the Eastern Cape.

The 12 girls and nine boys mysteriously died during and after a party organised at the Scenery Park venue on Sunday, 26 June.

READ MORE
Go to top
We live in a world where facts and fiction get blurred
In times of uncertainty you need journalism you can trust. For 14 free days, you can have access to a world of in-depth analyses, investigative journalism, top opinions and a range of features. Journalism strengthens democracy. Invest in the future today. Thereafter you will be billed R75 per month. You can cancel anytime and if you cancel within 14 days you won't be billed.
Subscribe to News24
Next on News24
BREAKING NEWS LIVE | 3 die in deadly Durban crash