The deployment is under the current Operation CHARIOT which is assisting the flood affected communities in KwaZulu-Natal. #SANDF#JointOperationsDivision#SAMHS#HealthWarriorsServingTheBrave#KZNFloods pic.twitter.com/wCs59c35oK

Taxpayers will fork out around R500 million for the SA National Defence Force's (SANDF) deployment to flood-ravaged parts of KwaZulu-Natal and the Eastern Cape.

More than 60 bodies of people who died during the floods that hit KwaZulu-Natal three weeks ago are yet to be identified by their families.

READ MORE ON THE WITNESS

President Cyril Ramaphosa presented the government's relief plan for flood victims in KwaZulu-Natal and the Eastern Cape, but opposition parties took the opportunity to take a swipe at the ANC.

DA leader John Steenhuisen said it was more than two weeks since the flood, and many communities were still without water and electricity.

He said that, in many areas, there was still no sign of water tankers, which "could've easily been brought in from other provinces".

The sitting has adjourned.

Ramaphosa says the floods should be treated as a national effort, and not an opportunity to grandstand.

Ramaphosa is going to provide a response to the debate. 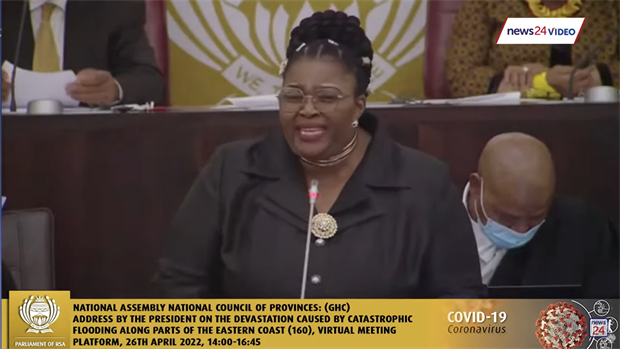 ANC chief whip Pemmy Majodina is the last speaker and will conclude the debate. Eastern Cape Premier Oscar Mabuyane the magnitude of the disaster requires much needed support from the national government.

Freedom Front Plus MP Stephanus du Toit says the damage would not have been horrible if municipal infrastructure had been in better condition. Zikalala says he will ensure that all contracts for relief efforts, are pre-authorised.

Police Minister Bheki Cele calls on the House to return to the debate.

There are now screaming battles in the chamber, and several MPs are raising points of order.

KZN Premier Sihle Zikalala criticises the DA for politicising the events in his province. Zikalala says while the DA calls on people to work together, it politicises the matter. 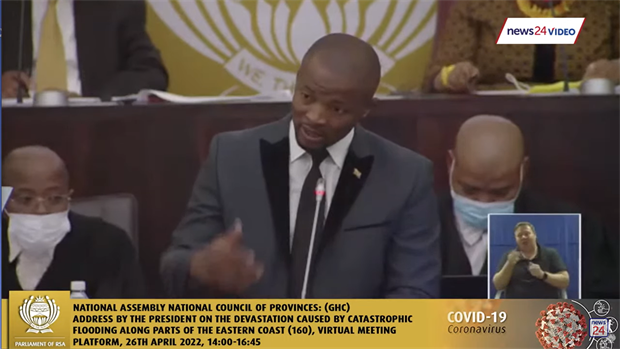 ACDP MP Steve Swart says the government should tap into the resources of churches, mosques and synagogues. These buildings can be used to assist those affected.

Qaanitah Hunter | KZN floods: The vultures are circling - and Ramaphosa knows it
READ MORE ON NEWS24

"I am sure there are vultures waiting at the gates. Waiting, so that they can start looting," Groenewald says. Freedom Front Plus leader Pieter Groenewald says South Africans should pray every day, not just during times of disasters. "The ANC is still accused number 1," Groenewald tells the sitting.

IFP stalwart Mangosuthu Buthelezi says families throughout KZN and the Eastern Cape have suffered. He says the floods have changed the lives of thousands.

Mkhaliphi says the EFF will be on the ground as people rebuild their lives. "We wish the people of KZN strength during this difficult time." 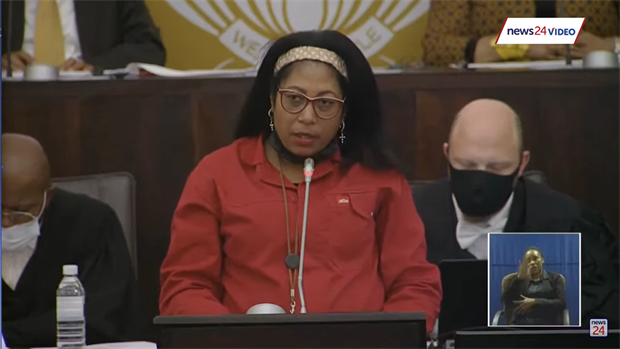 Steenhuisen concluded his speech. The EFF is next.

Steenhuisen says people need to know who is in charge of the recovery. "This should be a clear and publicly available plan," he says.

Stenhuisen says when leadership is absent, lawlessness and chaos will reign.

Steenhuisen says it's been over two weeks since the floods, and several communities have still not received services. He also says Ramaphosa declaring a national state of disaster was a sign that he did not trust the local and provincial government. Lucas concludes her speech. DA leader John Steenhuisen is next. Lucas says the poor will remain vulnerable during these devastating times. She calls on the government to also implement economic recovery plans in provinces affected by the floods.

Lucas says Parliament has already activated its oversight mechanisms in response to the floods. - Jason Felix Deputy chairperson of the National Council of Provinces Sylvia Lucas is the next speaker.

Ramaphosa calls on South Africans to help those most affected. He says it is his wish that parties can prove it can work together, Ramaphosa tells MPs. "This is our hour", Ramaphosa says as he concludes his speech. Ramaphosa says the nation has seen acts of great heroism from South Africans. "Within hours they mobilised," Ramaphosa says. He also thanks the SAPS, and SA National Defence Force for taking huge risks and facing challenges trying to rescue those affected.

Ramaphosa says the Auditor-General will do real-time audits on flood relief funds.

Ramaphosa says its clear that more money will be needed. "Its a great shame that the public debate was that this money will be misappropriated. This shows how tired people of SA has gotten tired with corruption. Several measure will be taken to strengthen oversight."

Ramaphosa says some of the funding needed is available within the current budget. National Treasury is providing guidance on accessing grants to be used for repair and rebuilding damaged infrastructure, he tells MPs.

Go to top
We live in a world where facts and fiction get blurred
In times of uncertainty you need journalism you can trust. For 14 free days, you can have access to a world of in-depth analyses, investigative journalism, top opinions and a range of features. Journalism strengthens democracy. Invest in the future today. Thereafter you will be billed R75 per month. You can cancel anytime and if you cancel within 14 days you won't be billed.
Subscribe to News24
Next on News24
LIVE | Covid-19 in SA: 7 238 new cases

Here are the Daily Lotto results
Full list of lottery results
Voting Booth
As a parent, what do you struggle to find money for?
Please select an option Oops! Something went wrong, please try again later.
Nappies, they cost too much
7% - 304 votes
Formula and food, it's getting so expensive
18% - 808 votes
Creche and school fees are a struggle every month
76% - 3481 votes
Previous Results
Podcasts
PODCAST | The Story: What is behind Khayelitsha's recent mass shootings?