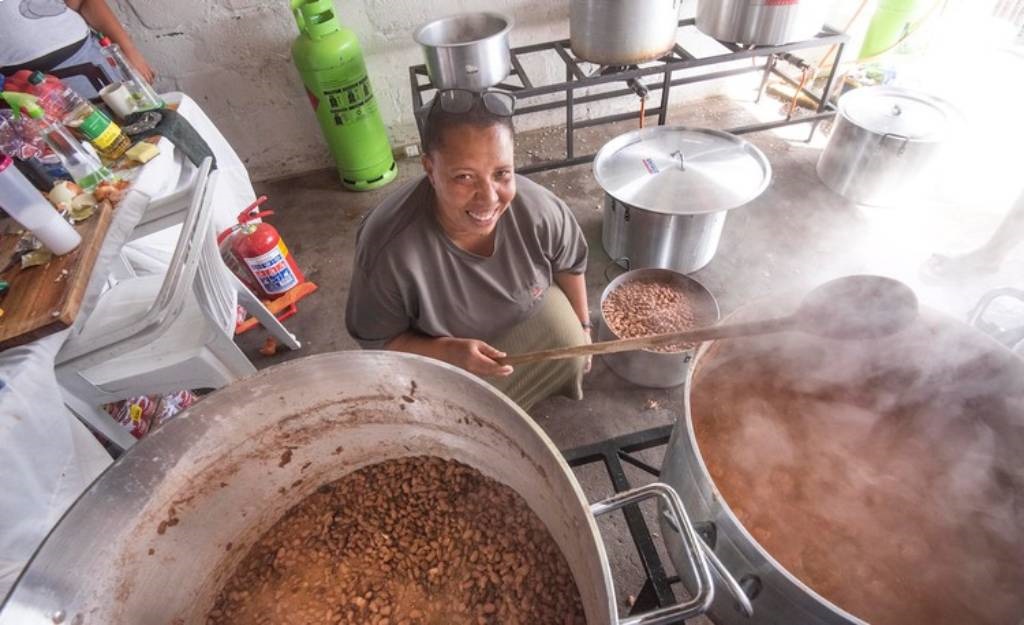 GroundUp reported in April how Lucinda Evans has been cooking meals to feed over a thousand children in Lavender Hill from her garage since the start of the national lockdown.
Brenton Geach, GroundUp

The Department of Basic Education says that, bar a "few hiccups", the nationwide schools feeding scheme is up and running. But teachers, parents and pupils have told civil society organisations this is not the case.

Director-General Mathanzima Mweli said there was no need for court intervention and that Minister Angie Motshekga had never backtracked on a promise to reinstate the National Schools Nutrition Programme (NSNP), which feeds about 9.6 million children, irrespective of whether or not they are back at school, GroundUp reported.

This is in his written response to an urgent application launched in the Gauteng High Court in Pretoria by Equal Education (EE), supported by the Equal Education Law Centre and Section 27.

In the matter set down for 2 July, EE wants the court to declare that all qualifying pupils, regardless of whether or not they have resumed classes, must receive a daily meal, and that the minister and provincial MECs (barring the Western Cape, which has publicly committed to rolling out school feeding) are in breach of their constitutional duties.

It said a structural interdict was required so that there was court supervision going forward.

But Mweli said feeding had continued through the Department of Social Development, even during the hard lockdown, and, at the time of deposing his affidavit, he expected the national nutritional programme to be functioning in all provinces from 22 June.

He said in some provinces, the target of feeding all pupils, not just those at school, had been achieved - in others, there were glitches that were being addressed.

"Although nearly all the schools were ready to commence with the programme on 8 June (when most schools opened for Grades 7 and 12), everyone had to adapt and adjust to a new reality. It took about two weeks to sort out a few hiccups.

"I am not looking for an excuse, but the harsh reality is that the government does not have unlimited resources… We could not put all our resources immediately and fully behind only the NSNP.

"We have also put in monitoring systems so that we can pick up any logistical problems on the ground and address situations as they arise in the daily running and operation of the programme," he said.

But EE general secretary Noncedo Madubedube said Mweli had provided no evidence that meals were now being provided, only "generalised statements of good intention".

In her affidavit, she said the department had not responded to the personal experiences of pupils about the devastating impact the suspension of the programme had had on them.

Recent evidence collected by EE shows that "large numbers" of pupils were not being fed.

"On 23 June, we conducted an urgent investigation into what the position is on the ground by contacting a sample of schools, learners and parents.

"In short, it shows that the NSNP has not been rolled out to all qualifying learners in all grades. In Limpopo, even learners in Grades 7 and 12 are not receiving sufficient food."

The snap survey was conducted by contacting about 70 schools, 27 parents and several pupils in five provinces.

Madubedube urged the court to consider this evidence "in the interests of justice".

"These are urgent proceedings, affecting the daily breach of the constitutional rights of millions of children. It concerns whether they will continue to go hungry.

"If the department can produce evidence showing that they have complied with their constitutional and statutory obligations, that will bring the litigation to an end.

"The fact is, the commitment to resume the NSNP remains an empty promise," she said.

Here are your Lotto and Lotto Plus results
Full list of lottery results
Lockdown For
DAYS
HRS
MINS
Voting Booth
South Africa has over 150 000 Covid-19 cases. Do you know someone who has been infected?
Please select an option Oops! Something went wrong, please try again later.
Yes I do
27% - 3833 votes
Yes, more than one person
24% - 3470 votes
No I don't
49% - 6937 votes
Previous Results
Podcasts
PODCAST | THE STORY: Delays remain the name of the game for Zuma’s corruption case