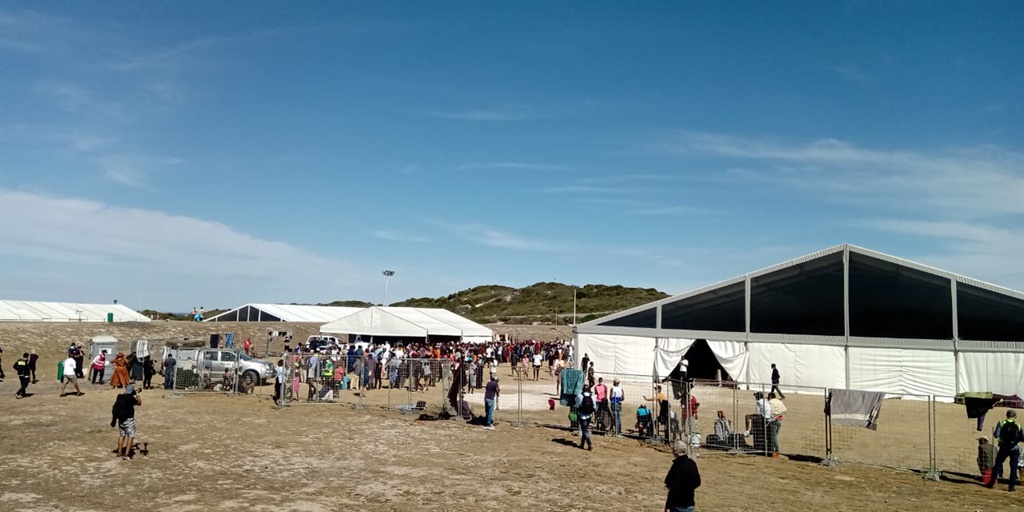 Doctors Without Borders has called for the phased decommissioning of the Strandfontein temporary relocation camp in Cape Town, which was established to house the homeless during the nationwide lockdown.

The organisation has urged the City of Cape Town to invest more resources in their shelters in order to ensure that it "actually meets Covid-19 prevention criteria as regulated".

The international humanitarian medical non-governmental organisation - Médecins Sans Frontières (Doctors Without Borders) [MSF] - announced this recommendation in a statement after it assessed several temporary shelters in Cape Town, Tshwane and Johannesburg, finding poor infection and prevention control at all of it.

Specifically referring to the contentious Strandfontein camp, which houses 1 500 destitute people, the MSF said it specifically promoted the development of smaller, community-based shelters closer to facilities that already provide certain required services, such as mental healthcare.

Dr Gilles van Cutsem, a senior TB/HIV adviser with MSF, who assessed the camp on Saturday as part of the team investigating health conditions at the shelter, said if anyone were to develop the coronavirus or TB at the site, the chances for medical staff detecting it early are small. The risk for transmission to many was very high due to "gross overcrowding and because the availability of screening and healthcare services are erratic".

"The danger of doing harm is great and this should alarm anyone," Van Cutsem said.

Mayoral committee member for safety and security JP Smith at a press conference on Thursday said the main concern had been around physical distancing.

"We can confidently today say that we fully comply with the social distancing requirements. We have now opened all the marquees and have distributed people across all of them," he said.

This had not initially been possible as all the marquees had not yet been erected as the City only had a week lead time, Smith continued.

"With a week, we didn't start like we would have wanted, fully prepared. The site is sort of evolving day by day - as we go, the amenities are improving."

Liesbeth Schockaert, MSF project coordinator for regional migration, said the organisation was concerned over a "high level of uncertainty and ambiguity" on whether people living in the camps were there voluntarily.

"In addition to violating individual rights, it might further exacerbate the public health risk posed by Covid-19, because vulnerable people don't all trust authorities, and their legitimate fears of detention might force some underground causing them to altogether avoid seeking care, even when needed."

Mayoral committee member for community services and health Zahid Badroodien on Wednesday said that, to date, 142 persons had left the Strandfontein site, either to be reunited with their families, or of their own volition.

He said this was a clear indication that no one was being held against their will.

According to MSF, the City of Tshwane had, like the City of Cape Town, established similar large-scale, high occupancy relocation camps, although they "quickly changed their approach, appreciating the risks of such unworkable set-ups and then opened smaller, less congested shelters that are easier to manage".

The City of Johannesburg was following a similar strategy, although all of the shelters assessed by the NGO's medical teams found the facilities overcrowded, with food distribution erratic and insufficient access to water and sanitation.

There were also low levels of coronavirus screening as well as a lack of Covid-19-related health promotion and education.

Insufficient medical service for the high numbers of people at the shelters was also noted.

We live in a world where facts and fiction get blurred
In times of uncertainty you need journalism you can trust. For only R75 per month, you have access to a world of in-depth analyses, investigative journalism, top opinions and a range of features. Journalism strengthens democracy. Invest in the future today.
Subscribe to News24
Related Links
Parliament to deal with Mkhwebane's removal proceedings later as focus remains on Covid-19
WATCH | Tourist hotspot, the Cape Winelands, silent during lockdown
Western Cape govt calls for Sassa to reopen some offices as food protests escalate
Next on News24
LIVE | Covid-19 in SA: Cases rise by 3 962 as death toll goes up by 31

2 bag the Daily Lotto prize!
Full list of lottery results
Lockdown For
DAYS
HRS
MINS
Voting Booth
Matric results are out! Are you happy with your child's result?
Please select an option Oops! Something went wrong, please try again later.
No, the pandemic really messed up their ability to focus
29% - 36 votes
Yes, they did well given the circumstances
71% - 87 votes
Previous Results
Podcasts
LISTEN | The Inge Lotz Story - a miscarriage of justice