In a stunning about-turn on Wednesday, the government announced that a ban on the sale of tobacco products and cigarettes would continue from Friday when some Level 5 lockdown restrictions are eased.

This prompted an immediate response from tobacco industry representatives, who intend to head to court immediately to challenge the decision.

President Cyril Ramaphosa announced a new five-level risk-based approach to the lockdown last Thursday and said the sale of cigarettes would be allowed.

On Wednesday evening, Cooperative Governance and Traditional Affairs Minister Nkosazana Dlamini-Zuma provided details of the upcoming downgrade to Level 4 from midnight on Thursday and said after consideration and debate, the ban on cigarette sales would remain in place for "public health" reasons.

Dlamini-Zuma said 2 000 public comments received on the amended lockdown regulations (out of 70 000) were against the lifting of the cigarette sales ban, which had prompted renewed discussion. 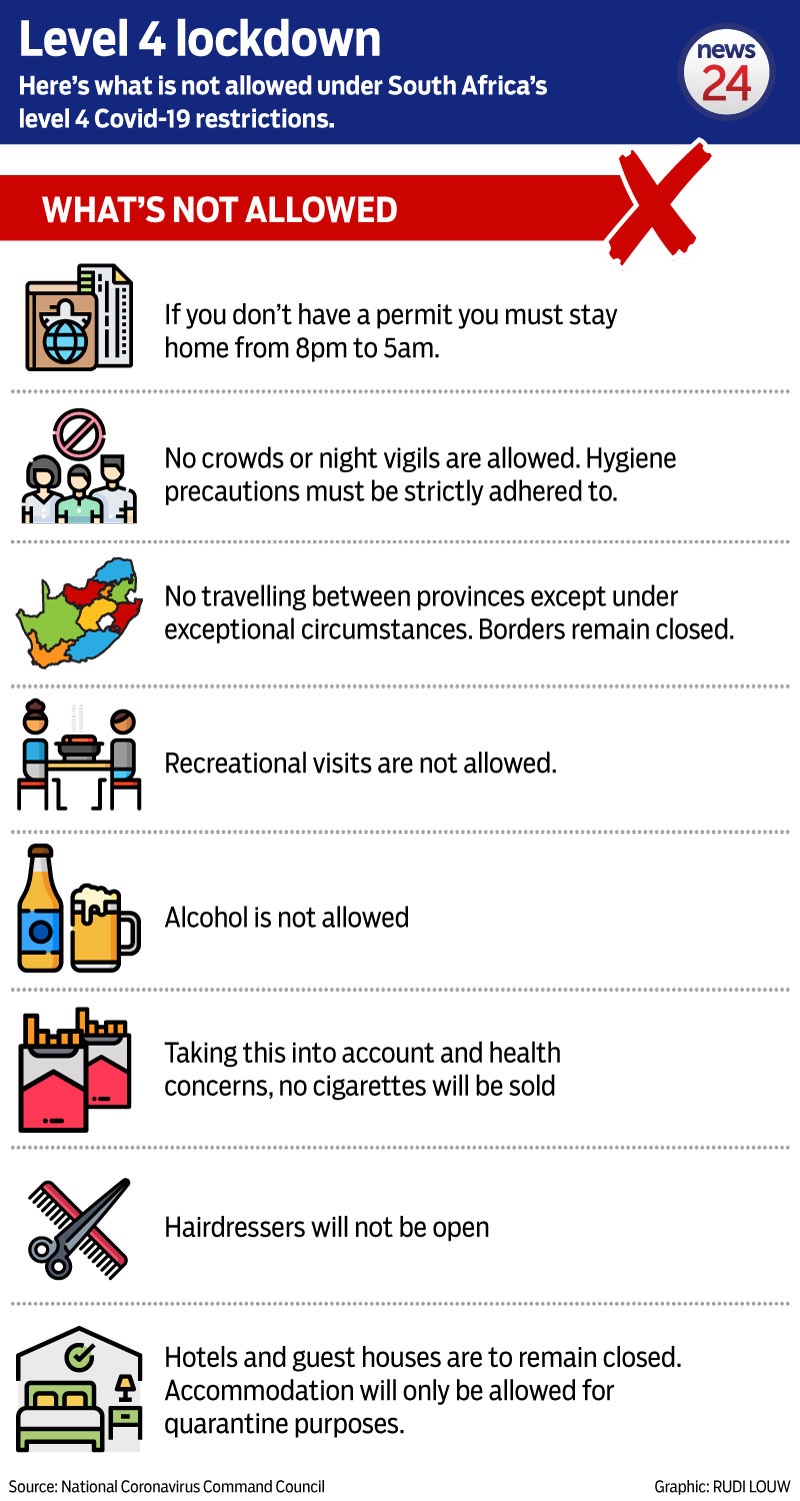 Of these, 22 000 submissions related to people being allowed to exercise outside their homes.

This would be allowed from Friday, but under certain conditions. People would only be allowed to run or cycle within a 5km radius of their homes between 06:00 and 09:00, and not in groups.

She also announced a that a curfew would be in place for anyone not carrying a permit for essential work, confining people to their homes between 20:00 and 05:00 daily - another regulation that is likely to face stiff opposition. In what will undoubtedly be a precedent-setting case testing, not only the ban on cigarettes, but the government's seemingly unfettered powers during the Covid-19 lockdown, the Fair Trade Independent Tobacco Association (FITA) confirmed it would head to court immediately.

There are concerns about the legality and constitutionality of the decision, as well as the billions lost to the fiscus from taxes, and the impact this will have on South Africa's flourishing illicit tobacco trade.

Shortly after Dlamini-Zuma's announcement, FITA chairperson Sinenhlanhla Mnguni, said: "We will be consulting with counsel at 08:30 on Thursday morning."

FITA, which represents numerous independent tobacco manufacturers, previously threatened to head to court but relented when Ramaphosa announced that cigarettes could be sold from 1 May.

Ramaphosa made the announcement in an address to the country on the Level 4 lockdown regulations on April 23.

"The sale of cigarettes will be allowed," he said at the time.

On Saturday, when Dlamini-Zuma and Trade and Industry Minister Ebrahim Patel outlined some details of the Level 4 lockdown, the suggested changes, including the lifting of the cigarette ban, were opened for public submissions.

Dlamini-Zuma said on Wednesday that the National Command Council (NCC), the ministerial body overseeing the government's Covid-19 response which Ramaphosa chairs, had received the public submissions against the lifting of the cigarette sales ban.

She said the government had listened to the concerns as a "responsive government".

"We are a government that is responsive to the people. Even if it (the government) takes a decision and people say they don't like that decision for health reasons, and we are fighting a health crisis…It shows we are a responsible government."

She said the public submission had reminded her about some of the dangers of smoking.

"Even myself, I'd forgotten about skyf that people smoke together… how people put saliva on their zol (rolled cigarette) and then they share… so these things came from the public, showing the dangers of smoking. In the way people smoke, especially the poor, it would really create a very fertile ground for the virus to spread."

Speaking to News24 on Wednesday night, Mnguni lamented the short time frame in which public submissions were considered and said the rationality of the decision to extend the ban, based on numerous factors, including loss of revenue and loss of income to tobacco farmers, would form the basis of the court challenge.

It is estimated that the country loses on average of about R1 billion a month in excise duties from taxes on tobacco products as long as the ban is in place, as opposed to a flourishing illicit trade that has seen people buying cigarettes at massively inflated prices – up to R900 a carton for known brands.

And none of the revenue is flowing back to the tax man.

Former head of enforcement at the South African Revenue Service, Johann van Loggerenberg, who was a key figure in fighting illicit cigarette trade during his time at SARS, said the ban was forcing normally law-abiding spaza shop owners to resort to crime.

"Existing drug and other crime syndicates have expanded and diversified their products to include cigarettes...while existing tobacco and cigarette syndicates are now in overdrive," he said.

Evidence of this could be found in looking at the brands so far seized by police in busts – some of which were illicit brands not seen in South Africa for 15 years or more.

The illicit tobacco trade remains big business in South Africa. In 201,8 research body Ipsos released a study that showed one brand that was considered illicit, RG, was the biggest selling brand in the country.

RG is manufactured by Gold Leaf Tobacco, mainly in Zimbabwe.

Evidence before the Nugent Commission into governance at SARS showed that revenues from the tobacco industry had declined, especially during the era of former SARS commissioner Tom Moyane, as reported by Scorpio.

Van Loggerenberg said that post 2014, during the state capture period, the increase in illicit trade – which is supposed to be monitored by SARS – increased by 30 to 40%.

"Government lost complete control on this. So now [they] are moving off from a low base in respect of knowledge, capacity and capability [to police the illicit trade]," he said.

Recent research suggested the government was just starting to get a handle on the problem with huge benefits to the fiscus.

But the University of Cape Town's Research Unit on the Economics of Excisable Products, reported in March this year that the government appeared to have made significant progress in clamping down on the illicit tobacco trade.

Their study found that after several years of growth in the illicit trade of cigarettes, tax revenues from tobacco (of which cigarette sales constitute 95%) had increased substantially in the 2019/2020 financial year.

In other words, it would appear that cigarette traders had been able to hide less money from SARS.

Between the 2018/2019 financial year and the 2019/2020 one, the industry declared 11% more cigarettes, a trend which the researchers said could not simply be because of a sharp rise in smoking.

It is unclear what the impact of the cigarette ban will be on the illicit trade overall, but recent research by the Human Sciences Research Council suggests that a quarter of people living in informal settlements have been able to buy cigarettes since the lockdown began.

The study found that 8% of people living in suburbs and 12% living in townships were also able to buy cigarettes.

In a statement released on social media, Tax Justice for South Africa (TJSA) condemned the announcement as "life-endangering economic sabotage".

TJSA is an organisation that campaigns for stronger measures against the illicit economy, particularly in the tobacco market.

"The ill-thought prohibition of cigarettes is impoverishing the nation, enriching criminals and destroying the public's faith in the lockdown," said TJSA founder Yusuf Abramjee.

We live in a world where facts and fiction get blurred
In times of uncertainty you need journalism you can trust. For 14 free days, you can have access to a world of in-depth analyses, investigative journalism, top opinions and a range of features. Journalism strengthens democracy. Invest in the future today. Thereafter you will be billed R75 per month. You can cancel anytime and if you cancel within 14 days you won't be billed.
Subscribe to News24
Related Links
‘Lifting ban too risky’
Lockdown: Smokers still able to get cigarettes, informal trade is active - survey
4 cops charged for allegedly stealing cigarettes during lockdown search operation
Next on News24
BREAKING NEWS LIVE | Hawks arrest three more people suspected of being July violence instigators