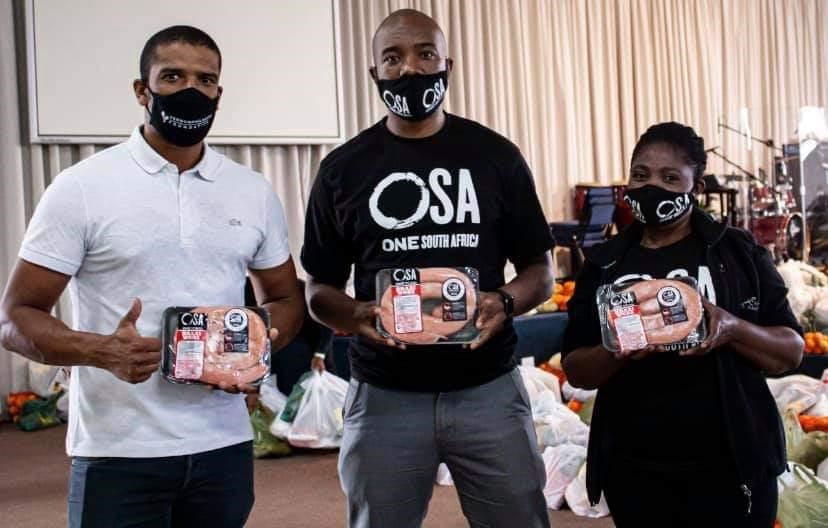 The chief activist of the One South Africa Movement, Mmusi Maimane, and Proteas star Vernon Philander have joined forces to do their bit during the Covid-19 pandemic - starting with braai wors.

Their initiative seeks to source and distribute food, particularly meat, to those impacted most by the lockdown.

"The Vernon Philander Foundation and a number of sport people are getting behind this because we believe that in this time, no South African should go hungry," Maimane told News24.

"Our crucial focus has been that the greatest risk for Covid-19 is poverty. Poor people don't have choices, aren't eating easily and are living in congested spaces.

"Through bulk buying and through the generosity of many South Africans, we are able to procure food at the right pricing [and] we are able to distribute.

"We have already been able to put together meals for over 6 000 families which feeds those families for 14 days," he said.

READ | Maimane calls on South Africans to join his civic movement, noting it is not a political party

Maimane said the movement had secured braai wors - a popular product and symbol of a shared South African culture.

According to a pamphlet, the movement said braai wors was an "essential part of our culture" but was missing from many food packs.

"It also symbolises so much more than just food, it's about our shared South African culture of braais and shishanyama," the movement said.

However, meat in general is often too pricey for many South Africans to buy.

"The issue of meat, as an example, is that when you get into supermarkets and big chain stores their interest is profit to start off with. We are saying, there is something of an injustice when poor people cannot afford that," Maimane said.

ALSO READ | Mmusi Maimane: Let's build a new normal in South Africa, or the politics will fail us

The team has gone directly to suppliers to drive down the price of food, particularly meat.

"Lockdown and all of these things are just delay measures, but actually the only sustainable solution for Covid-19 is about fighting poverty," he said.

While food parcels might be a necessary solution for now, the movement said it was unsustainable in the long run.

"That is why we are working hard to source food products at cost price and selling them with a negligible mark-up - making it affordable for poor and working-class South Africans.

"We want to maintain stability in disadvantaged communities by providing lower food prices during the crisis and beyond," it added.

We live in a world where facts and fiction get blurred
In times of uncertainty you need journalism you can trust. For only R75 per month, you have access to a world of in-depth analyses, investigative journalism, top opinions and a range of features. Journalism strengthens democracy. Invest in the future today.
Subscribe to News24
Related Links
Mmusi Maimane: Let's build a new normal in South Africa, or the politics will fail us
Mmusi Maimane: We must invoke real oversight over the laws governing this lockdown
Mmusi Maimane | Covid-19 lockdown: the people are not the enemy, the virus is
Next on News24
LIVE | Covid-19 in SA: Death toll at 86 967 as cases rise by 2 261