The medical and nursing managers at Northdale Hospital in Pietermaritzburg have been suspended, according to Health MEC Nomagugu Simelane-Zulu.

The CEO, who was on sick leave for two weeks, was "redeployed" to her original position as a maternal health specialist.

The announcement comes after a woman, Hlengiwe Khumalo, posted a video of a makeshift parking lot facility where her father, Sibusiso Khumalo, 67, died of hypoxia.

It was at 76 when he arrived and dropped to 61 within a few minutes of him being there.

Her father complained that he felt cold when he was admitted to the facility for suspected Covid-19 patients, but a nurse allegedly told him there was nothing she could do about it. One of his children went home to fetch him a blanket.

Khumalo died at around 02:00 on Saturday.

Simelane-Zulu said the precautionary suspensions would allow for an investigation into his death "after he had reportedly received medical treatment in a partially covered flu clinic [in] the hospital's parking lot".

"The MEC has also given a directive for the urgent installation of a temporary structure at the hospital, with adequate heating – which has been erected as of today – while the department's infrastructure development unit fast-tracks the establishment of a more solid structure."

The investigative team, from the University of KwaZulu-Natal, has already begun its work, and is expected to produce a report by Friday and make recommendations, Simelane-Zulu added. 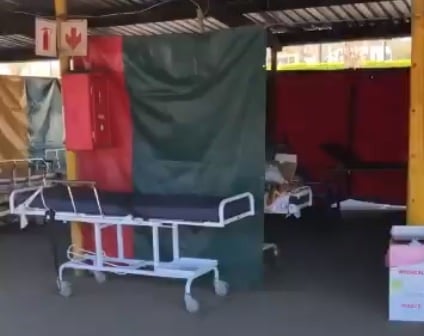 She said the department also embarked on an audit to "determine the suitability of its flu clinics at other hospitals".

Simelane-Zulu conveyed her condolences to the family.

In the province of KZN, we have more than 70 hospitals. All of them were given a directive to establish flu clinics to help screen patients for Covid-19.

"They were even informed that if they could not identify the relevant section within the hospital - because some of our hospitals have spatial challenges – they could take money from their budgets and set up a temporary structure in order to ensure that there's space to put in patients for triaging."

The managers did not do their jobs

She lashed out at the hospital management.

"Many of our hospitals have done that. The problem that we’re having here at Northdale is that you have people who are employed to do a job, but they do not. They wait for others higher up to do their work. You get to the facility and find that management does not see anything wrong with having a tent with open spaces at the top, which lets in air."

"It is unacceptable for managers to look for excuses as to why certain things cannot be done. And when you ask them why, if they had challenges, these were not brought to the attention of the department, they are unable to answer. We are supposed to be hospitable to our patients. I do not understand why people are called managers when they do not manage."

She said the department would announce the findings of the investigation "in due course".

Lekker Heritage Day for 2 Daily Lotto players
Full list of lottery results
Lockdown For
DAYS
HRS
MINS
Voting Booth
Have you downloaded the Covid-19 tracing app?
Please select an option Oops! Something went wrong, please try again later.
Yes I have
13% - 498 votes
No, and I will not be downloading it
77% - 2887 votes
Not yet, but I plan to
10% - 375 votes
Previous Results
Podcasts
PODCAST | THE STORY: Where to now for ANC jetsetters who hitched a ride on SAAF plane?