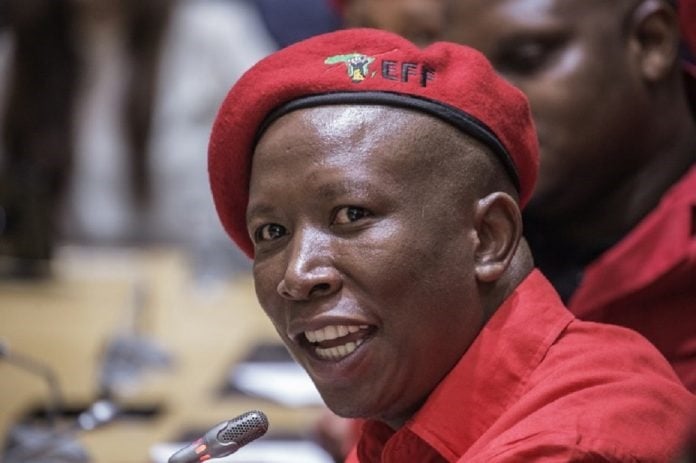 He was speaking during an interview on eNCA with journalist Vuyo Mvoko on Thursday evening.

Journalists Thandeka Gqubule and Anton Harber are demanding an apology and damages of R1m each from the EFF.

A court ruling gave the EFF seven days to prove allegations that the two were apartheid-era Stratcom spies.

The ruling comes after a video was posted by the now defunct Huffington Post SA shortly after Winnie Madikizela-Mandela's death. It showed a clip from a 2017 interview in which she names both journalists and says they specialised in writing negative pieces on her.

Speaking to Mvoko, Malema said: "If [Gqubule] is Stratcom, she must confess. She has gone to all houses to shop for information that clears her name. We never said she was a Stratcom member. You must find where EFF said Thandeka is Stratcom."

[Watch]: CIC @Julius_S_Malema addressing the issue of Afriforum "winning" cases against the EFF. He clarifies that Afriforum won cases without merit but technicalities. Now that we have correct issues with our legal team, they can bring it on! pic.twitter.com/sXFQ7l1Gjm

[Watch]: CIC @Julius_S_Malema reiterates that all the EFF did was to quote Mama verbatim. If the journalists have any issue, they must take it up with Mama. pic.twitter.com/9PTsFuPFcm

'We will defend ourselves'

He said the EFF merely called on the journalists to confess, only if they were guilty of working for Stratcom.

"We have never said you are guilty of it. We wrote a letter and explained the context of our tweet and statement."

He said the party was quoting Madikizela-Mandela. Malema showed no fear about the party being taken to court.

"We are not going to court, we are being taken to court. We will defend ourselves."

Malema attributed recent court defeats at the hands of AfriForum, the latest of which resulted in the EFF having to pay monies, to an incompetent stock of lawyers in the EFF's employ.

"The mistake we made was to hire incompetent people, who lack professionalism, who are not in a position to follow up matters before court in detail."

He said the first interdict brought against the party was unopposed.

"Why would we not oppose them? It is because of a mediocre and unprofessional legal team."

He said the EFF had since paid particular attention to the merits of some of the party's upcoming cases and was "not scared of these boers".

"They have not won the merits. We are now in and ready to go toe to toe."

We live in a world where facts and fiction get blurred
In times of uncertainty you need journalism you can trust. For only R75 per month, you have access to a world of in-depth analyses, investigative journalism, top opinions and a range of features. Journalism strengthens democracy. Invest in the future today.
Subscribe to News24
Related Links
EFF mum on AfriForum case loss, defamation case
Journalist Thandeka Gqubule gives EFF one week to prove apartheid spy claims, or pay up
'These are hurtful, ridiculous accusations' - media professionals respond to 'Stratcom' allegations
Next on News24
LIVE | Covid-19 in SA: 4 677 new cases as death toll climbs to 85 468