Malema, Ndlozi assault trial: 'You had no right to refuse them entrance,' lawyer tells cop 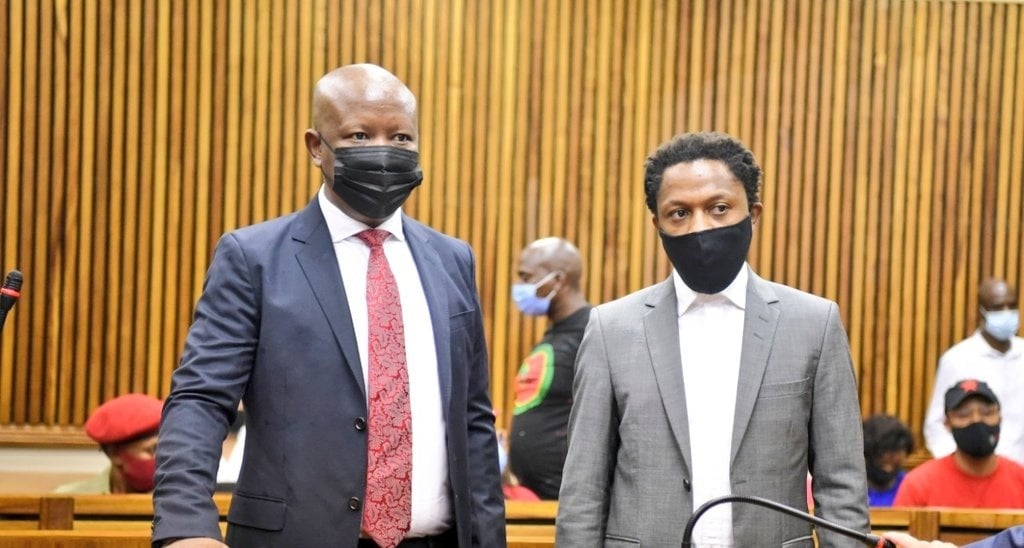 Lieutenant Colonel Johannes Jacobus Venter is testifying in the assault case of the politicians on Thursday.

It is alleged the two assaulted Venter at the Fourways Memorial Cemetery on 14 April 2018 at the funeral of struggle stalwart Winnie Madikizela-Mandela.

The police officer, who is attached to the Presidential Protection Services, testified in court that Malema had refused to walk into the cemetery after he had stopped his vehicle at the cemetery's entrance.

He testified that the vehicle Malema was driving did not have a permit to enter the cemetery.

The officer also told the court Malema's vehicle was not part of the main convoy that had arrived earlier, adding that it also did not have a visible permit.

Cross-examination of Lt Col Johannes Jacobus Venter has now resumed. Advocate Laurence Hodes questions about the accreditations of Malema and Ndlozi and their vehicle on 14 April 2018. #EFF #JuliusMalema@TeamNews24

The convoy included vehicles transporting the Mandela family, the president, former and current heads of state as well as ministers.

But Hodes put it to the witness that his version was untrue and that Malema's vehicle was indeed part of the convoy.

Asked what type of permits were used, Venter said it was photo accreditation.

"I want to put it to you that if they had accreditation, you had no right to refuse them entrance," Hodes said.

Venter said vehicles that were part of the convoy did not have permits, which is why he did not check for them. But when Hodes asked why he checked for a "visible" permit on Malema's vehicle specifically, the officer said it was because it only arrived after the convoy.

The witness said according to his knowledge vehicles were only permitted for the stadium and they were informed of the specific vehicles that would have proceeded to the cemetery.

The police officer said even if Malema's car had a permit, he would still have stopped it from entering because it was not part of the convoy.

Hodes said footage from the SABC on YouTube showed a far larger convoy than what Venter was telling the court.

He also put it to Venter that there were several white cars in the convoy which he did not mention in his testimony. Venter said he had forgotten about those vehicles in his statement.

Venter said he was not counting the number of vehicles as they drove in.

"I put it to you – you had made up your mind you're not going to let this vehicle in the cemetery."

He said their instruction was that the family, heads of state, president and deputy president as well as ministers would be attending the funeral at the cemetery.

"Why were you looking for a permit if it wouldn't have helped to get in the premises anyway?" Hodes asked.

He told Venter he would be asking the court for an adverse inference against him because he seemed to be changing and manufacturing his version of the turn of events.

Hodes has shown Venter what he put to him, is a permit on the dashboard of Malema's vehicle. The lawyer has pointed the permit but Venter says he only sees a reflection nothing else. #EFF #JuliusMalema @TeamNews24

Hodes charged that Venter was lying to the court by changing the chain of events in his testimony.

The video footage showing multiple vehicles entering the gate was then viewed and Hodes quizzed Venter about who were in the vehicles.

The police officer could not identify who exactly was driving the cars and whether they were permitted to enter. He said they were part of the convoy and that was why they had entered.

In the footage, Hodes pointed out that from the dashboard an item, which he said was a permit, was there. But Venter said to him the item looked like a reflection.

WATCH | 'Police get pushed every day,' says Malema as assault trial is postponed

The footage viewed was a much longer version from the one Venter submitted to the court and was questioned by the State about on Wednesday.

"Then what was the purpose of looking for the accreditation because that was the substance of your testimony.

"You're lying to this court and I'm going to prove that. Your evidence in chief... and you testified yesterday on your own accord, you said to this court that after the vehicles entered the Vito Mercedes came to the gate.

"Then on your own accord you said you did not see any visible permit. Why were you looking for a permit if it wouldn't have helped getting in or not?"

Hodes accused Venter of misleading the court in his testimony as compared to what the footage from the day showed.

After viewing the video which showed multiple vehicles entering the cemetery, Hodes put it to Venter that he had stopped Malema although he was part of the convoy.

The footage showed Venter standing in front of the vehicle a couple of seconds after what he described as the "convoy" arriving, which was why Hodes put it to him that Malema's car was in the convoy, contradicting the officer's claim that it had only arrived afterwards.

We live in a world where facts and fiction get blurred
In times of uncertainty you need journalism you can trust. For 14 free days, you can have access to a world of in-depth analyses, investigative journalism, top opinions and a range of features. Journalism strengthens democracy. Invest in the future today. Thereafter you will be billed R75 per month. You can cancel anytime and if you cancel within 14 days you won't be billed.
Subscribe to News24
Related Links
Assault case: Malema was like Mama Winnie's 'son' - court hears statement from late Zindzi Mandela
Malema, Ndlozi assault case: Lawyer says there are 'flaws in cop's statement'
'No white man will stop me' - cop tells court of day EFF leaders allegedly assaulted him
Next on News24
BREAKING NEWS LIVE | Suspect, 20, arrested for murder after 'severely assaulted' body found on farm