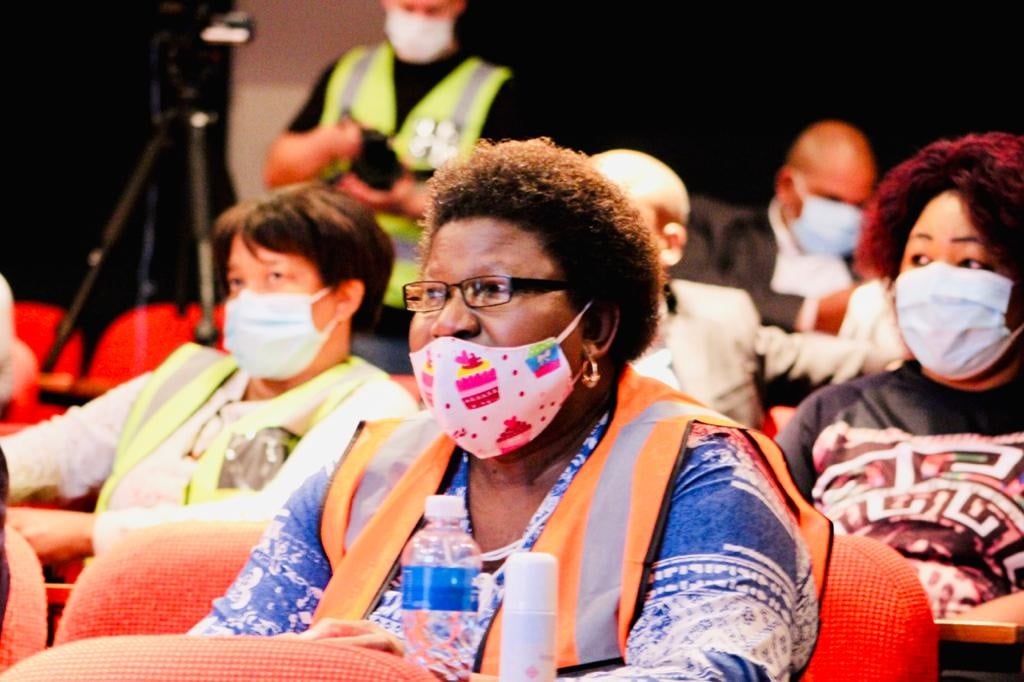 Eastern Cape Premier Oscar Mabuyane will make a decision about Health MEC Sindiswa Gomba after she appeared in court on Friday.

She faces a string of charges, including fraud, corruption and money laundering.

The case is in connection with R10 million allegedly siphoned from the Buffalo City municipality under the pretence that it was a budget for Nelson Mandela's funeral preparations.

Gomba was a councillor at the municipality at the time.

In a statement on Friday, Mabuyane said he noted the charges and the court appearance of Gomba, adding that he is taking the case very seriously.

"Now that Ms Gomba has been charged by the NPA and was released on bail, the premier will look into this matter and he will communicate his decision to the people of the province soon.

"It is worth noting that when the premier appointed Ms Gomba into this position, she was not facing any charges because the NPA provisionally withdrew charges against her," his office said.

They also face a charge of contravention of the Municipal Finance Management Act.

There are 15 people accused, but only 11 were present in the dock on Friday.

They were charged, together with Vazi and Mati's respective companies, Forty Wings Lodge CC and Mpidos Emergence and Training CC.

Another suspect, Dean William Fanoe, whose company is Mantella Trading 522 CC, will also be charged. He did not appear in court as he is adhering to Covid-19 protocols.

It is understood that a portion of the R10 million meant for the logistics around Mandela's funeral in 2013, was siphoned off through the flouting of tender processes. | @MaliDayimani https://t.co/7DAv5LkUNL

The charge sheet alleges that, following Mandela's death on 5 December 2013, a scheme was hatched by the accused to swindle the municipality of R10 million.

Although R5.9 million was successfully transferred to the accused, the municipal manager, Andile Fani, halted the further payment of R4.1 million.

According to the charge sheet, on 6 December 2013, before the municipality had an opportunity to officially consider procurement of services for the funeral, Mkolo agreed with a service provider, Mzwandile Sokwali from Victory Ticket 750 CC, that Victory Ticket would submit an inflated quotation for the transportation of mourners to various venues.

Sokwali was allegedly asked to obtain a quotation from another service provider, for an amount more than Victory Ticket's quotation. This was done, and MNI Transport also submitted a quotation - to the value of R10 580 000.

It is alleged that municipality officials acted with a common purpose to defraud and manipulate municipal procurement processes through illegal deviation in order to ensure the appointment of Victory Ticket.

According to the charge sheet, the plan was, firstly, to mislead the council into accepting that it was expected to make funding available for the transportation of mourners to various venues, where memorial services were to be held. Then, to manipulate the situation, so that funding could be used for purposes other than for what they were officially approved for.

In December 2014, Sokwali and his company, Victory Ticket, pleaded guilty to fraud and money laundering after entering into a plea and sentence agreement with the state. He was fined R100 000, with R50 000 suspended, and sentenced to five years' imprisonment, wholly suspended for five years.

On Friday, prosecutor Ulrike De Klerk told the magistrate, Annemarie Elliot, the State is not opposing bail on the schedule five offence.

The accused were released under strict bail conditions, which includes that they have to report to the investigating officer of the case every Sunday, until the trial is finalised.

They must supply physical addresses and, should they need to change addresses, they should inform the investigating officer. They also should not apply for any travel documents. They were given five days to hand over their passports.

The accused were also warned to refrain from talking or interfering with any of the 33 State witnesses.

"If you fail to appear in court or comply with the bail conditions, you will be charged - a fine of R20 000 or a year in prison," said Elliot.

Elliot postponed the case to 5 March for the defence to be furnished with copies of the docket, and for the four absent accused to be added in the case.

The trial started in 2014 and, along the way, has seen postponements and the withdrawal of charges against some of the accused.

On Friday Nyameko Diniso, the lawyer representing Mkolo, Nkuhlu, Mati and Ludidi, requested the court to make him understand why the four were back in court when charges against them were withdrawn by the NPA on 13 May 2019.

Diniso told Elliot the charges were withdrawn after his clients made submissions to the NPA and the director of public prosecutions.

Elliot told Diniso to take the matter up with the magistrate of Court A, where the matter would be heard next.

Called for comment, NPA spokesperson Sipho Ngwema said the charges were provisionally withdrawn, based on insufficient evidence, but it did not mean the accused were acquitted.

"This is now a new trial and there's sufficient evidence to prosecute them on the proffered charges. The allegations are clear and substantiated," said Ngwema.

While entering the court, an irritated Gomba lashed out at journalists.

"Please feel free to take photos openly, don't steal the pictures. I know that you are here for me, you have turned this case into my case alone. You are abusing us emotionally to sell your papers. Go ahead, play with people's feelings to sell your paper," she said.

Did you know you can comment on this article? Subscribe to News24 and add your voice to the conversation.
We live in a world where facts and fiction get blurred
In times of uncertainty you need journalism you can trust. For only R75 per month, you have access to a world of in-depth analyses, investigative journalism, top opinions and a range of features. Journalism strengthens democracy. Invest in the future today.
Subscribe to News24
Next on News24
RUNDOWN | SA nears 50 000 Covid-19 deaths, moves to Alert Level 1 as infections drop

1 person bags the Daily Lotto jackpot
Full list of lottery results
Lockdown For
DAYS
HRS
MINS
Voting Booth
When a Covid-19 vaccine for under 16's becomes available, will you be taking your children to get it?
Please select an option Oops! Something went wrong, please try again later.
Yes, immediately!
37% - 2713 votes
I'll wait to see how others respond
26% - 1896 votes
No, I don't think they need it
37% - 2670 votes
Previous Results
Podcasts
PODCAST | MISSING MATTHEW EPISODE 3: Decades of false starts add to a family's despair