The University of Cape Town's (UCT) student representative council (SRC) has pleaded with the public to make donations for students who were evacuated due to a massive fire that destroyed buildings at the institution on Sunday evening.

Matthew Field, who serves on the SRC, is one of the people organising donations. He told News24 food, clothing, toiletries and deodorant were needed most urgently.

READ | CAPE TOWN FIRES: Here’s where and what to donate

"The UCT community finds itself in an unprecedented crisis. Circa 4 000 students have been forced out of their homes by fire. With only the shirts on their backs, they watched as their beloved library and residences burned."

He said thousands of students have been without a change of clothing or basic toiletries since Sunday. Students evacuate from their residences of the University of Cape Town as a forest fire burns out of control on the foothills of Table Mountain.
AFP RODGER BOSCH / AFP 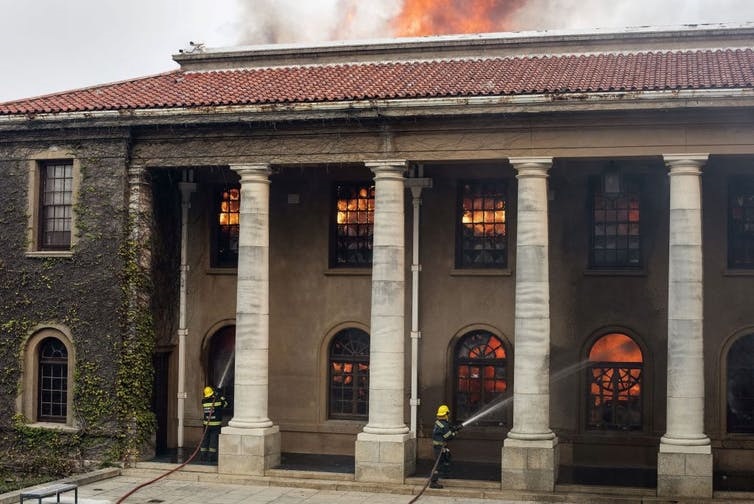 Firefighters trying to extinguish a fire in the Jagger Reading Room at the University of Cape Town. (Rodger Bosch/AFP via Getty Images)

"Many have barely received enough food. There are various ways the public can support it. Toiletries (toothpaste, deodorant, lotion ,soap, etc), clothes, food and water can be donated," he said.

Donations can be made at the Graduate School of Business' Breakwater campus at the V&A Waterfront, while food donations can be delivered to the business school and at Old Mutual in Pinelands.

Mop-up operations are under way at UCT after a massive wildfire destroyed several historical buildings on the university's upper campus on Sunday.

One of the buildings gutted by the runaway fire was the Jagger Reading Room, which formed part of the UCT Libraries' Special Collections.

On Tuesday, the university announced that all academic activities would be suspended until Friday. No classes, tutorials, laboratory work or tests would take place for the next four days.

UPDATE ON FOOD AND DONATIONS pic.twitter.com/LJGxOcmlbZ

If you wish to contribute, please drop off essential items such as toiletries,clothes & food at the Old Mutual West Campus, 91 Jan Smuts Road, Pinelands, Cape Town. Alternatively, the institution has also set up a relief fund & welcomes all monetary donations.
Details are below. pic.twitter.com/oCthZrdSJv

"The extent of the damage to the affected UCT buildings is still unknown. About 4 000 students were evacuated from residences on Sunday and placed at temporary accommodation sites across the city," UCT vice-chancellor Professor Mamokgethi Phakeng said.

"Humanitarian organisation Gift of the Givers has come on board to prepare students' meals from Old Mutual's offices in Pinelands. Once meals have been prepared, they are distributed to the various accommodation sites. The necessary arrangements have also been made to cater for Muslim students, who are observing the month of Ramadaan."

She said students and staff were still in shock after the fire.

"We are, of course, deeply concerned about the shock and fear that students and staff may have experienced," she said.