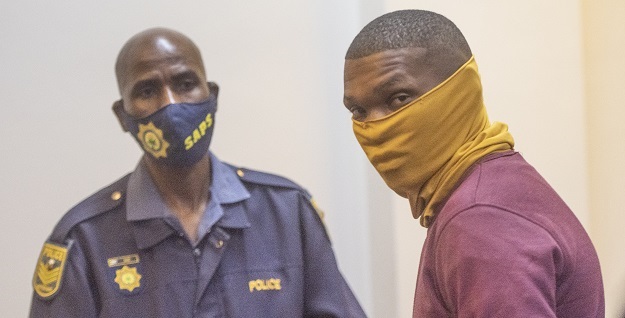 Murder accused Jeremy Sias drove around with Meghan Cremer’s body in the boot of her car. But according to him, he didn’t know her remains were in the vehicle.

According to his version, heard through his advocate Bashier Sibda during cross-examination in the Western Cape High Court on Wednesday, he had made the discovery while rifling through the car for any valuables after he had taken the Toyota Auris for a joyride.

He claims he realised he would be accused of killing her as he had been driving her car, using her bank cards and had been in possession of her phones.

Sibda said according to his client, he went to dump her body at a spot familiar to him. These admissions were made while Sias' former friend, Wilton Azur was in the witness box.

Azur, the brother of Sias' partner who is the mother of four of his children, had testified that the murder accused had, on 3 August 2019, pulled up outside his house at the Egoli informal settlement, called him, and told him as well as his sister and two others to get in the car. They had gone to the Ja Rule's tavern, before deciding to go to a nightclub in Wynberg, where they were pulled over in a roadblock. Sias was found to be under the legal limit and was allowed to drive off again, despite not having a driver's licence.

Azur testified that Sias had withdrawn money and bought them KFC before returning to Ja Rule's. According to the witness, Sias at one point "just disappeared" for half an hour, and he could see "somethings wasn't right with him".

Sibda said that his client's version of events was that he had returned to the car with the intention to return it to the Vaderlandsche Rietvlei Farm in Philippi, where Cremer lived and Sias was employed as a general worker.

He had gone to "look in the car to see what he could find" in addition to the items he had already found, Sibda relayed.

"He says it was then that he opened up the boot and saw the body of the deceased lying [there].

"Completely shocked and horrified to see this," Sibda said his client had been in a state of panic of being accused of Cremer's murder.

In those circumstances, he closed the boot and drove off with the intention of disposing of the deceased's body. He took the body to an area he was familiar with because of his quad bike route, and he disposed of the body and returned to the shebeen.

Azur didn't agree with this version, although he conceded that when Sias returned, he started drinking excessively, confirming he wanted "clean, undiluted" liquor.

Sibda contended it was for his client to "deal with the horror he had now confronted and experienced".

Sias on Monday pleaded not guilty to premeditated murder. Five days after Cremer's disappearance, Sias had pointed out her body among bushes in Olieboom Road, Philippi.

She had been strangled with a blue ribbon, which was still tied around her neck, hands and feet.

According to the State, Cremer was murdered in her cottage at Vaderlandsche Rietvlei Farm in Philippi, where Sias was employed.

Sias faces further charges of aggravated robbery, theft, and obstruction of justice, in that he allegedly dumped Cremer's stolen iPad in a toilet and destroyed her cellphones to avoid being traced.

He was initially charged alongside Charles Daniels and Shiraaj Jaftha, who were accused of hiding Cremer's car while trying to find a potential buyer. Their attempt to sell it, however, fell through as they could not produce the registration documents.

The pair had been arrested two days after Cremer's disappearance while in possession of her Toyota Auris.

Sias claimed he took Cremer's vehicle for a joyride after discovering it with the keys in the ignition, not knowing the vehicle belonged to her or that she had been murdered.

Azur had testified that Sias had given him two phones, on which he had seen a photo of a white woman on a horse.  The accused, however, said he had only given him one of the devices, which Azur denied.

Azur’s testimony that his former friend had told him not to "worry about the knife” was also rejected by Sias, who claimed this had never happened.

He further denied that he had smashed Cremer's phones or that he had discarded of her bag. Azur's shock claim on Tuesday that Sias had spoken to him on the phone the night before he was to testify and threatened him to change his statement was also rubbished by the accused.

"He denies that he spoke to him," Sibda told Judge Elizabeth Baartman, claiming that Azur wanted to create a bad impression and manufacture evidence against him. The witness denied this.