Andrew Mlangeni attends the 'The State Against Mandela' Photocall.
Stephane Cardinale, Corbis via Getty Images
He was vocal against corruption, as well being a humble leader with integrity, political party leaders have said, remembering the life of fallen struggle veteran Andrew Mlangeni.

President Cyril Ramaphosa announced the death of the 95-year-old stalwart on Wednesday morning.

UDM leader Bantu Holomisa remembered fondly his encounters with Mlangeni, whom he said he met in 1989 shortly after his release from prison.

On one occasion, struggle veterans - including former president Nelson Mandela, Goven Mbeki, Ahmed Kathrada, Walter Sisulu and Mlangeni - visited Holomisa in the then Transkei in the Eastern Cape to discuss violence wracking the country.

"In describing him, there is only one word - a down to earth person and humble. He also distinguished himself during the era of (former president) Jacob Zuma. He did not mince his words on corruption."

On a lighter note, Holomisa said Mlangeni was known for his golfing skills.

"It was very difficult to beat him. I would joke and say, 'Jah that means you were not in jail, you were somewhere playing golf.' He was that good."

In a statement, EFF spokesperson Delisile Ngwenya said the party fondly remembered how Mlangeni had travelled to Polokwane to pay his respects to Julius Malema's family after the death of his grandmother.

'He loved his country more than himself'

"At the cemetery, Baba Mlangeni still took on his ailing knees, walked, picked up the shovel and poured the soil into the grave, the final resting place of Koko Sarah Malema. A gesture that stayed with us and will continue to warm our hearts for the rest of our days," she said.

"A true freedom struggle stalwart, true human being, humble and loved his country more than himself. We will never forget his contribution as Cope to the freedom of this country and we are grateful for what he has done for this country." 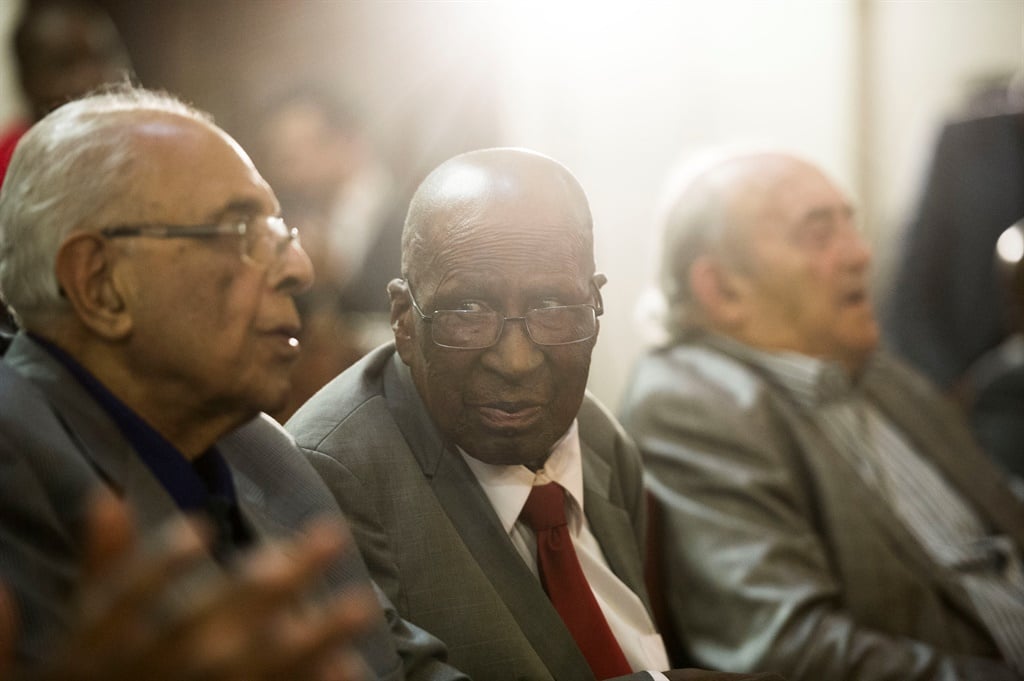 Andrew Mlangeni was designated accused no. 10 during the Rivonia trial, which saw him appear on charges of treason alongside other ANC leaders, including Ahmed Kathrada and Denis Goldberg.
Theana Breugem

Mlangeni first joined the struggle, as part of the ANC Youth League in 1951, before becoming a member of the ANC in 1954. In 1961, he was selected as one of the first six members of the ANC to receive military training in China before the formation of Umkhonto we Sizwe. On his return to South Africa in 1963, he was arrested and charged with sabotage in the Rivonia Trial.

Mlangeni was never given a senior position in the democratic government - hence his description of himself as a "backroom boy".

He was an ANC Member of Parliament from 2009 until 2014, where he served on the Portfolio Committee on Defence and Military Veterans and the Joint Committee on Ethics and Members' Interests. He was also chairperson of the ANC's integrity commission and founded the June and Andrew Mlangeni Foundation.

IFP founder Mangosuthu Buthelezi said he was grateful to have had the opportunity to thank Mlangeni for his service to the nation.

"Just last month, we celebrated his 95th birthday and I expressed our appreciation for his leadership, patriotism and integrity. It was good to see him, albeit via Zoom, and to know that his life was being celebrated while he was still with us.

"Now, on behalf of the Inkatha Freedom Party, I must speak again about his leadership, patriotism and integrity, for these are the attributes we will remember as we honour his memory."

DA interim leader John Steenhuisen said Mlangeni was a firm believer in the power of education to unlock people's aspirations, and even managed to study toward his own BA degree while incarcerated on Robben Island.

"He also abhorred the corruption that has infected our state and government, and maintained that Jacob Zuma should return to Robben Island if found guilty. He is famously quoted as saying, 'I did not go to prison for 26 years for people to steal from the poor,'" Steenhuisen said.

Related Links
Accused No. 10, Andrew Mlangeni: 'A pillar to which the ANC could hold onto'
Andrew Mlangeni, 1925 – 2020: The life of the quiet revolutionary and the last Rivonia trialist
LIVE | A giant tree has fallen: Tributes pour in for struggle stalwart Andrew Mlangeni
Share
Next on News24
LIVE | Covid-19: 969 new cases and 64 new deaths in SA

Here are your Lotto and Lotto Plus results
Full list of lottery results
Lockdown For
DAYS
HRS
MINS
Voting Booth
Have you downloaded the Covid-19 tracing app?
Please select an option Oops! Something went wrong, please try again later.
Yes I have
13% - 886 votes
No, and I will not be downloading it
77% - 5067 votes
Not yet, but I plan to
10% - 646 votes
Previous Results
Podcasts
PODCAST | THE STORY: A look into News24’s exposé of the KwaSizabantu cult in KZN