The woman arrested for the murder of Groblersdal game farm manager Raymond Papapavlou, was reportedly involved in a romantic relationship with his wife, Simone.

Patricia Ray-Lee Smith, 23, appeared in court on charges of murder and conspiracy to commit murder on Thursday in connection with the murder of Papapavlou.

Last week, Netwerk24 reported that Simone allegedly conspired with Smith to kill Papapavlou. This information was contained in the charge sheet obtained by Netwerk24.

On Sunday, Rapport reported that Ocker Botha, Smith's attorney of record, confirmed the relationship between his client and Simone, but strongly denied Smith's involvement in the murder. Smith with Simone Papapavlou in this 2015 picture. 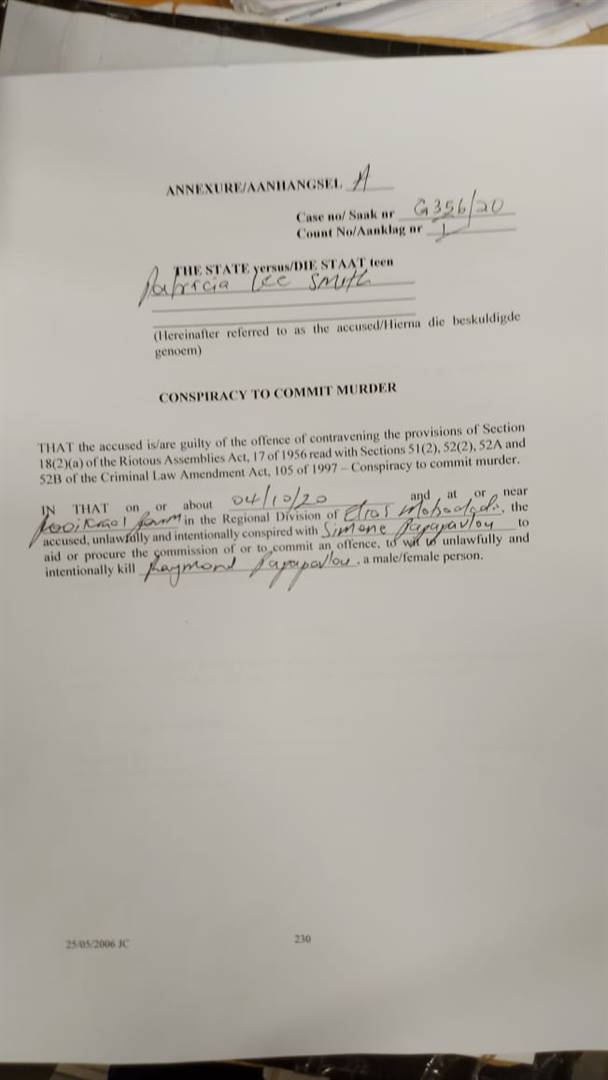 "If I'm involved in a lesbian relationship, it does not mean I'm a killer. It is a common fact that my client was 300km away [from the murder scene], at her home in Johannesburg that night and the police know this," Botha told Rapport on Saturday.

"They are trying to intimidate and use my client to flush out the real killer," he reportedly said. While police spokesperson Brigadier Motlafela Mojapelo earlier said more arrests were expected, Simone Papapavlou had not yet been arrested. She was also not in court on Thursday, Netwerk24 reported.

On Friday, Mojapelo would not be drawn into confirming or denying that Simone was a suspect in the case. National Prosecuting Authority spokesperson Mashudu Malabi would also not comment to News24 on any details about the investigation.

Simone Papapavlou told Netwerk24 her attorney had instructed her not to comment on the matter.

We live in a world where facts and fiction get blurred
In times of uncertainty you need journalism you can trust. For only R75 per month, you have access to a world of in-depth analyses, investigative journalism, top opinions and a range of features. Journalism strengthens democracy. Invest in the future today.
Subscribe to News24
Related Links
UPDATE | Groblersdal farmer's wife allegedly conspired to have him killed - report
Friend of murdered Groblersdal game farmer's wife arrested in connection with shooting
Groblersdal game farmer's body found with multiple gunshot wounds
Next on News24
LIVE | Covid-19 in SA: 210 new infections as death toll rises by 7

Lucky Sunday for 3 Daily Lotto players
Full list of lottery results
Lockdown For
DAYS
HRS
MINS
Voting Booth
Facebook is facing a fresh crisis after a former employee turned whistle-blower leaked internal company research. Do you still use Facebook?
Please select an option Oops! Something went wrong, please try again later.
Yes, the benefits outweigh the risk for me
32% - 2306 votes
No, I have deleted it
38% - 2726 votes
Yes, but I am considering deleting it
31% - 2215 votes
Previous Results
Podcasts
PODCAST | Ballot Box: Why Facebook is not doing enough against election misinformation