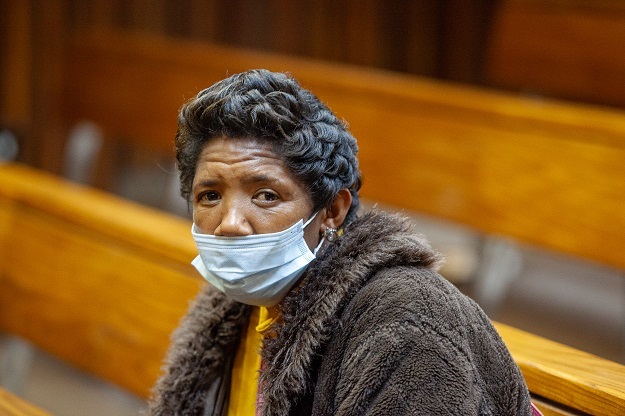 The mother of Nateniël Julies, Bridget Harris, sobbed in court as a police officer testified how an Eldorado Park policewoman shot and killed her son and what had followed in the moments and hours after.

Julies, 16 - who had Down Syndrome - sustained chest wounds that claimed his life.

Constable Mandla Dumisani Sithole narrated the incident that led to Julies' death on 26 August 2020. He said after Julies was certified dead at Chris Hani Baragwanath Hospital on the day he was shot, they found a packet of biscuits.

Hearing that, Harris - who was seated next to her family members - starting sobbing.

Sithole claimed that Julies was shot once with a shotgun by his colleague Constable Caylene Whiteboy.

On that fateful night, he said, he was with Whiteboy, student constables Hussein and Visagie and Sergeant Simon Scorpion Ndyalvane.

Ndyalvane was their senior and mentor.

#NathanielJulies Three police officers have pleaded not guilty in the High Court sitting in Palm Ridge. The officers allegedly shot and killed Nathaniel Julies, 16, outside his home in Eldorado Park on 26 August 2020 @TeamNews24 pic.twitter.com/lodyWbQC0z

After buying food from various places outside Eldorado Park, the officers returned to the township and parked near Julies' home.

He said they stopped their police van near a block of flats and truck that Visagie claimed was storing suspected stolen car parts.

"I replied that I forgot to load operationally. I only knew how to load it normally. As we were eating our food, Julies arrived and stood near the truck. Julies later approached us, talking. I could not hear what he was saying. Whiteboy said Julies was a 064, meaning that he was not well.

"Whiteboy said she knew Julies. Ndyalvane took a microphone connected to a loudspeaker of the vehicle ordering Julies to leave and he left and returned. Julies stood at the same spot where he was standing before," Sithole testified.

READ | Nateniël Julies: A year after his death, mom is frustrated at delays in case

"Whiteboy took a shotgun from the van, and I then heard a loud bang. The barrel of the gun was facing at the direction of Julies and the truck. When I looked, I saw Julies lying down next to the truck.

"Ndyalvane jumped out of the van, ran to Julies and picked him up. Visagie ran to the back of the van, opened it, and Ndyalvane put Julies inside. Ndyalvane returned inside the van and said 'it is bad guys', and we drove off," Sithole said.

The police officers went to a fire station in Freedom Park with Julies before heading to the hospital (Baragwanath).

Sithole said along the way, Ndyalvane, who was driving at high speed, instructed them to remove the bullet shell from the shotgun.

"We could not remove it because we were all shaking," said Sithole.

"He then removed it while driving. I didn't see where [the] shell ended at. He called for backup from Constable Ndaba, asking to meet him at Baragwanath hospital because something had happened. Along the way, Ndyalvane was calling several people, including his commanders.

"When we arrived at the hospital, Whiteboy and Ndyalvane jumped out and fetched a stretcher and placed Julies on it. They then pushed the stretcher and were assisted by a male medical practitioner," Sithole said.

Ndyalvane and Whiteboy returned to their vehicle and reported that Julies had died.

"We went inside the hospital, and I saw him lying on a stretcher. Julies had wounds on his chest. Julies was carrying a packet of biscuits.

"Whiteboy was crying. Ndyalvane said we must leave with the car, and he would return with other colleagues he had called for backup. Along the way, Whiteboy phoned Ndyalvane asking him to lie to their seniors that Julies was caught in a crossfire between the police and gunmen.

"Ndyalvane responded that Whiteboy mustn't speak over the phone because they are recorded. He said Whiteboy should come to the hospital where they would discuss," said Sithole.

ALSO READ | Nateniël Julies: 'Without him there will not be any Christmas for us' - grief-stricken mom

He said Ndyalvane had told them that he called another colleague - Sergeant Foster Netshiongolo - who would handle the matter and place live ammunition at the scene after a Colonel Sambo refused to help him.

The sergeant said Julies' family was at the police station.

Whiteboy, Ndyalvane and Netshiongolo are standing trial for Julies' murder.

The three have pleaded not guilty.