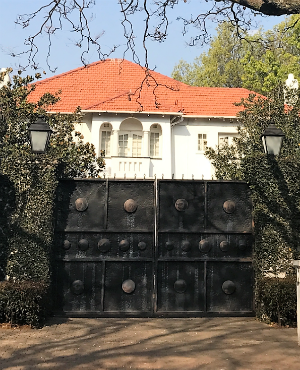 The property in Saxonwold, Johannesburg owned by Islandsite Investments and operated by the Guptas as a guesthouse. (Supplied)

Cape Town - The Guptas and their guests the SAPS' VIP Protection Services during the 2010 FIFA World Cup, a man dies after losing control of his vehicle and Grace Mugabe makes her first public statement since the Johannesburg assault incident.

Here is a wrap of some of the top stories on News24:

The Guptas and some of their friends and associates have been treated like cabinet ministers by the South African Police Service (SAPS) during the 2010 FIFA World Cup in South Africa, with members of the police's VIP unit escorting the Gupta party to several locations in and around Johannesburg.

INTERVIEW: Treasury boss says Gordhan and Nene were not involved in IT saga

President Jacob Zuma has done his best to dodge some testing questions from opposition MPs in Parliament.

The students of Hoërskool Pretoria West have been defeated after their parents showed them who wears the pants.

Grace Mugabe speaks out, but not on assault claim

Zimbabwe's first lady has made her first public statement since being accused of assaulting a young model in a Johannesburg hotel, but she steered clear of the incident in her comments.

One man has died after he apparently lost control of his vehicle and careened off a railway bridge on the N1 in Kraaifontein, the Western Cape province's traffic chief Kenny Africa has said.

Bell Pottinger has appealed a decision by the UK-based Public Relations and Communications Association (PRCA) to uphold a complaint filed by the Democratic Alliance.

I think I'm a likable guy, where are my millions? - Twitter reacts to Duduzane interview

Duduzane Zuma, who is a business partner of the controversial Gupta family, has spoken exclusively to the BBC, saying he is 'super happy' he met the Guptas.