No sign of Zuma in Nkandla, with few supporters at his home thus far

It was a quiet day outside the Nkandla homestead of convicted former president Jacob Zuma as the countdown to his incarceration begins.

There were few supporters at his controversial home, nestled in the rolling hills of KwaZulu-Natal and boasting picturesque views. By Wednesday morning, a small group of Umkhonto we Sizwe Military Veterans' Association (MKMVA) members patrolled the outer perimeter of the main entrance to Zuma's home.

Zuma supporters, particularly the MKMVA, have adamantly stated they would defend him against any threat.

READ | 'A boarding school for young offenders': Inside the Nkandla prison where former president Zuma could serve his sentence

Members of the media were consistently told to keep away from the main entrance, and some had to explain to MKMVA members that journalists did not require permission to capture images from outside the boundaries of the palatial home.

Zuma is the centre of attention after the Constitutional Court sentenced him to 15 months in prison for contempt of court for failing to appear at the State Capture Inquiry.

The court described his actions as calculated and insidious efforts to corrode the legitimacy and authority of the court.

MKMVA base commander Mfanfuti Gumede gave a media briefing but would not divulge Zuma's whereabouts.

When asked if the MKMVA would defend Zuma from being arrested by police, he said: "We will see when we get there. We will see what they want to do."

During the course of the day, a police vehicle with Nkandla police station markings arrived at the entrance of the homestead.

A conversation ensued between men in MKMVA uniforms and the officers for about seven minutes before the officers reversed and left.

MKMVA members quickly surrounded the vehicle to ascertain their purpose. According to the national police, the vehicle was on routine patrol. 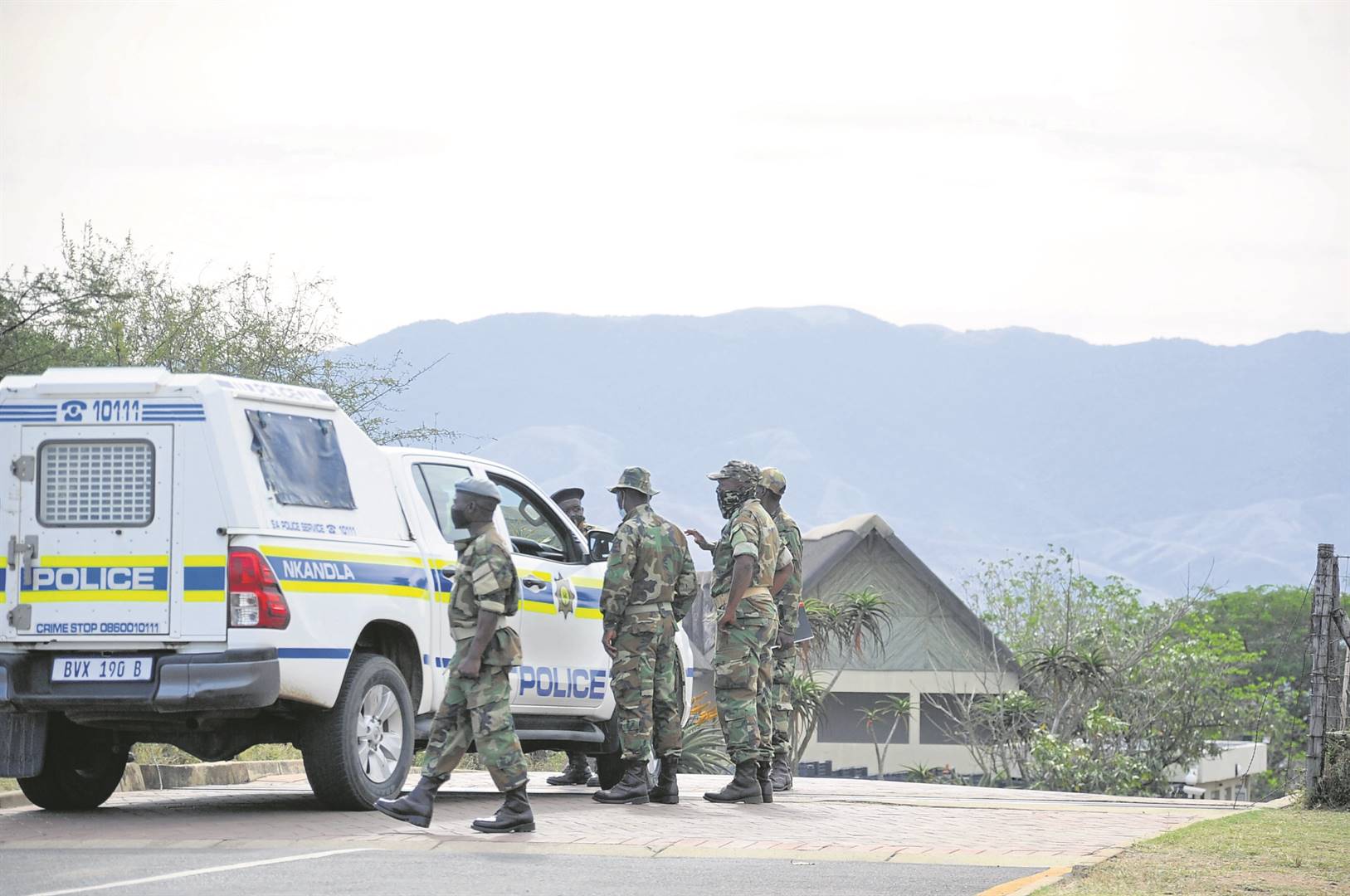 MKMVA members talk to a routine police patrol near Jacob Zuma’s home in Nkandla, KZN, while others mill about outside.

Zuma's son, Edward, also spoke to the media during the course of the day and claimed, as he always has, that there was an "unproven political manipulation" against his father.

When asked about his father's whereabouts, he coyly stated: "I can say he is in South Africa."

Few of Zuma's main allies were at his home on Wednesday, but some of his most ardent supporters turned up and spent the entire day at the main entrance.

Zuma and finding himself

One such ally was Thulani Gamede, the spokesperson of the Sanco Youth Congress. Gamede was one of the main role players who infamously threw a birthday bash for Zuma's 79th birthday at Sharks Board in the upmarket Umhlanga area in Durban.

When asked if there will be any resistance from Zuma, Gamede, like other Zuma allies who spoke to the media, was vague. "We are here to pledge our support. The five days left for him to find himself on whether he will go to jail or is going to be dragged to jail... but we are here to show our support."

While most of the week is expected to remain calm, some close to the Zuma camp believe further developments will emerge by the weekend or Monday. The Nkandla prison where Zuma could serve his 15 month sentence.
Clive Ndou In its majority judgment, the Constitutional Court ordered that Zuma hand himself over to either the Nkandla or Johannesburg Central police station within five calendar days of the judgment being handed down.

From that point, the station commander of the police station he goes to will have to ensure that Zuma is delivered to a correctional centre to start serving his sentence.

Lucky Sunday for 3 Daily Lotto players
Full list of lottery results
Lockdown For
DAYS
HRS
MINS
Voting Booth
Should Proteas star Quinton de Kock continue playing at the T20 World Cup even if he doesn't take the knee in support of the fight against racism?
Please select an option Oops! Something went wrong, please try again later.
Yes! He should be allowed to show his support any way he chooses
35% - 360 votes
No! If De Kock refuses to unite with his teammates, then he should be on the next plane home
12% - 117 votes
The only ones at fault here are Cricket SA, who have sabotaged another Proteas World Cup
53% - 539 votes
Previous Results
Podcasts
PODCAST | Ballot Box: An end to 'vat en sit' coalitions and how they will be regulated in the future