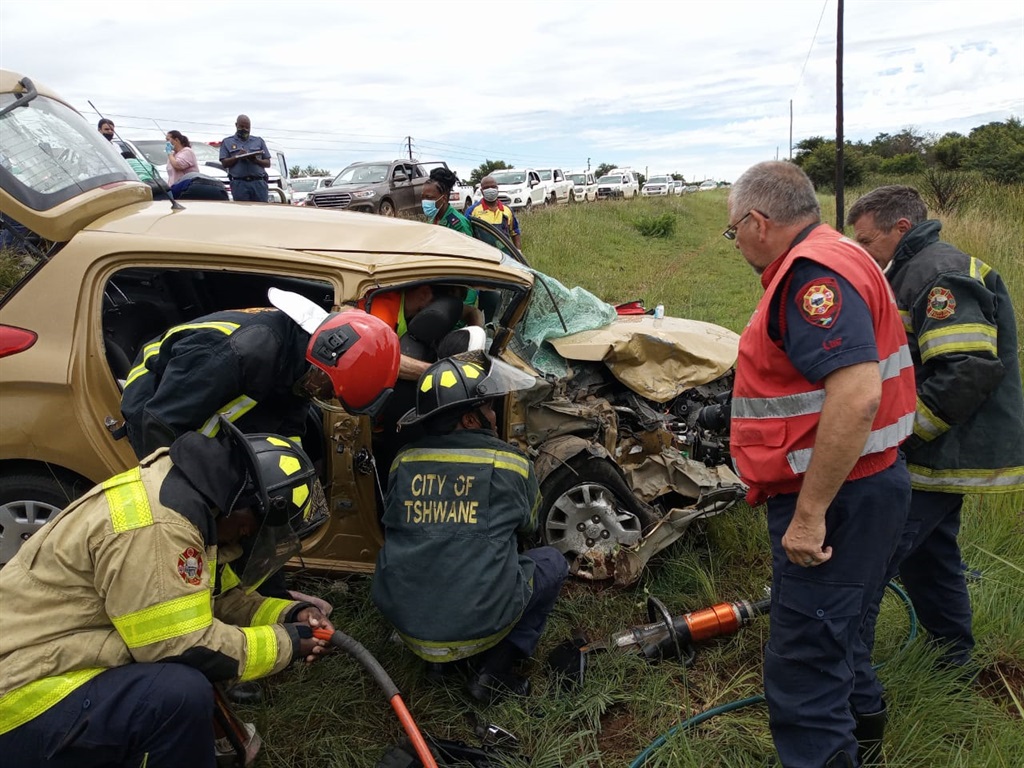 One person has died, and another eight have been injured in an accident in Pretoria on Sunday.
Supplied

One person died and another eight were injured in an accident in Pretoria on Sunday.

Among those injured were three children, the youngest of which was two years old.

Tshwane Emergency Services responded to the incident on the Moloto Road, near the Roodeplaat Spar, at around 12:30. One person has died, and another eight have been injured in an accident in Pretoria on Sunday.
Supplied

A woman succumbed to her injuries and was declared dead on the scene by paramedics.

"Eight other patients sustained serious to critical injuries and were transported to various hospitals in Tshwane. The injured included four adult males, three children aged 2, 6 and 9, and a female patient who had to be extricated with Jaws of Life from one of the light motor vehicles," said Mabaso.

The six-year-old girl had to be airlifted by chopper to Steve Biko Hospital.

"We advise motorists to be extra cautious when travelling during wet weather conditions. Law enforcement agencies will investigate the cause of the incident," he said.

We live in a world where facts and fiction get blurred
In times of uncertainty you need journalism you can trust. For 14 free days, you can have access to a world of in-depth analyses, investigative journalism, top opinions and a range of features. Journalism strengthens democracy. Invest in the future today. Thereafter you will be billed R75 per month. You can cancel anytime and if you cancel within 14 days you won't be billed.
Subscribe to News24
Related Links
Taxis, trucks contribute the most to fatal crashes on SA roads - Fikile Mbalula
Three killed in collision on N3, increasing holiday season road deaths
Mpumalanga driver to be charged after horror crash kills nine, injures 18
Next on News24
LIVE | Covid-19 in SA: 5 284 new cases

Here are the Daily Lotto numbers
Full list of lottery results
Voting Booth
Have you and your family been counted in Census 2022?
Please select an option Oops! Something went wrong, please try again later.
Yes
47% - 3244 votes
No
53% - 3621 votes
Previous Results
Podcasts
PODCAST | The Story: How one incident at Stellenbosch University sheds light on deeper issues