Modelling by a consortium of some of the country's foremost experts shows between 40 000 and 45 000 South Africans could die from Covid-19 by November, with current numbers of ICU beds expected to be overwhelmed almost immediately.

The release of the projections during an extensive technical briefing with Health Minister Zweli Mkhize and members of several teams producing modelling for government on Tuesday night came after intense criticism over the apparent lack of transparency over the modelling and other Covid-19 data.

The projections, which the experts stressed were subject to change as more data became available, show:

It is the first time government has released any modelling or projections publicly. While revealing the startling number of deaths and cases expected, key expectations around Covid-19 in the models are also being used to inform health interventions. 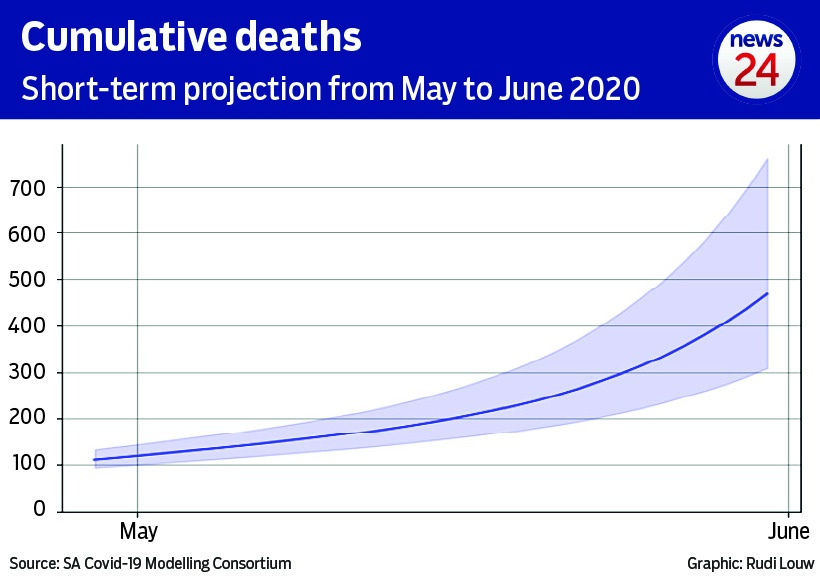 Graphic shows short-term projection of expected number of deaths nationally by the end of May. The shaded area shows lower and upper confidence bands. Graphic shows the total number of deaths between June and November, projected on optimistic and pessimistic trajectories.

Moultrie said the consortium would release updated models on a regular basis as new information and data became available.

Dr Sheetal Silal, of Masha, introducing the models, emphasised there was "considerable uncertainty" over the true scale and spatial distribution of Covid-19 as a result of the Person Under Investigation criteria and testing coverage.

She contextualised the models could not account for sudden and major shifts in the behaviour of populations, who could respond rapidly to limit transmissions as the realities of the virus became apparent.

Professor Juliet Pulliam of Sacema said the projections were not a "crystal ball prediction of the future". Graphic shows short-term total number of Covid-19 cases projected nationally by the end of May 2020. The shaded area provides for an upper and lower confidence band. Graphic shows long-term projection of the total number of Covid-19 cases between June and November, projected on optimistic and pessimistic trajectories.

"Will we be making the models public? Absolutely," Moultrie said.

"I think it's a requirement as part of democracy and transparency that the public are able to engage, see, critique and criticise the models and the information that are produced," he added.

"The models, however, have already been reviewed by a large number of groups, both the broader modelling consortium and departments of health, and presented to various committees, including the Ministerial Advisory Committee (MAC). So they have been through some fairly careful scrutiny including by other modellers, but it's essential the public and other academics get to engage and comment on the models.

"It has been stated explicitly a number of times that as new information, new data, new improvements, nuances, refinements and model structures are made - we will release, regularly, long-term and short-term projections," Moultrie said.

The models reveal that even at early stages of the outbreak, hospital bed capacities will be exceeded.

Mkhize said there were plans in place to increase ICU beds, which are required for patients who require extended time on a ventilator.

He said there were 125 390 general beds available, and roughly 4 000 ICU beds were available in the public and private sector and a further 6 500 were put up.

According to the projections, 4 000 ICU beds would be needed by early July. But not all of these beds were available at any given time due to patients suffering from other illnesses. Graphic shows short-term total number of ICU beds required nationally by the end of May 2020. The shaded area provides for an upper and lower confidence band. Graphic shows long-term projection of the total number of ICU beds required between June and November, projected on optimistic and pessimistic trajectories.

"There are also plans for additional ICU beds. For example, out in the Nasrec, there is place to put some ICU beds in there," Mkhize said.

The Nasrec convention centre near Johannesburg was identified early on as a venue to be used as a field hospital.

"I think we must just note that there will be this issue of ICU bed shortfall, but based on the current plans we are working on and also the forecast of the additional resources needed, there should be additional procurement that will help the numbers at that point," Mkhize said.

"That means as we move along, we will be dealing with that. In some of the districts we have said, we need to look at the lead time, the number of beds will be increasing as we go," he added.

A key objective of national lockdown was to provide time for hospital bed capacities, and ventilator capacities to be increased.

Health economics expert Dr Gesine Meyer-Rath, from HE2RO, said the modelling was being fed into various department of health and government bodies to help them anticipate what resources would be required and when.

The National Ventilator Project, managed by the Department of Trade and Industry, invited design proposals for ventilators from the public and was reported to have settled on a design that could be locally manufactured.

There was no indication whether production had yet begun.

"In terms of all the figures, because the models came in to catch up with an outbreak that was already in progress, with more and more data we will get better, more refined information that will be able to help," Mkhize said. Graphic shows short-term total number of non-ICU beds (general beds) required nationally by the end of May 2020. The shaded area provides for an upper and lower confidence band. 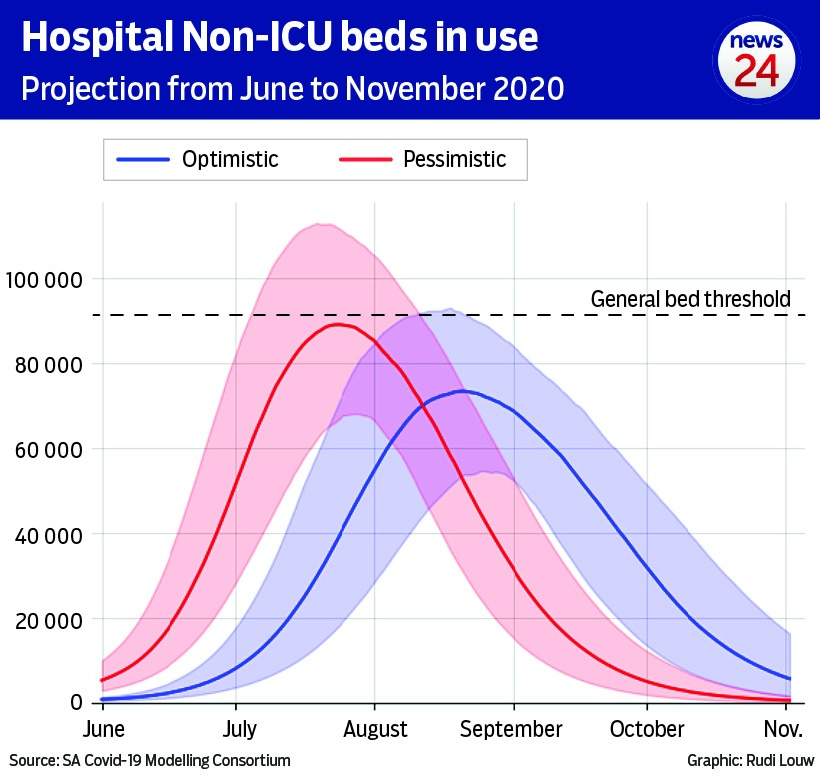 *All graphics by Rudi Louw, based on projections provided by the South African Covid-19 Modelling Consortium

We live in a world where facts and fiction get blurred
In times of uncertainty you need journalism you can trust. For 14 free days, you can have access to a world of in-depth analyses, investigative journalism, top opinions and a range of features. Journalism strengthens democracy. Invest in the future today. Thereafter you will be billed R75 per month. You can cancel anytime and if you cancel within 14 days you won't be billed.
Subscribe to News24
Related Links
Covid-19 in SA: Death toll surges past 300, 17 200 cases
Data lockdown: Tension simmers as questions are raised about access to Covid-19 information
Government holding back some 'fluid' Covid-19 modelling data to avoid panic, stigma - report
Next on News24
BREAKING NEWS LIVE | Newly elected Gauteng premier Panyaza Lesufi reshuffles his executive, two MECs get the chop