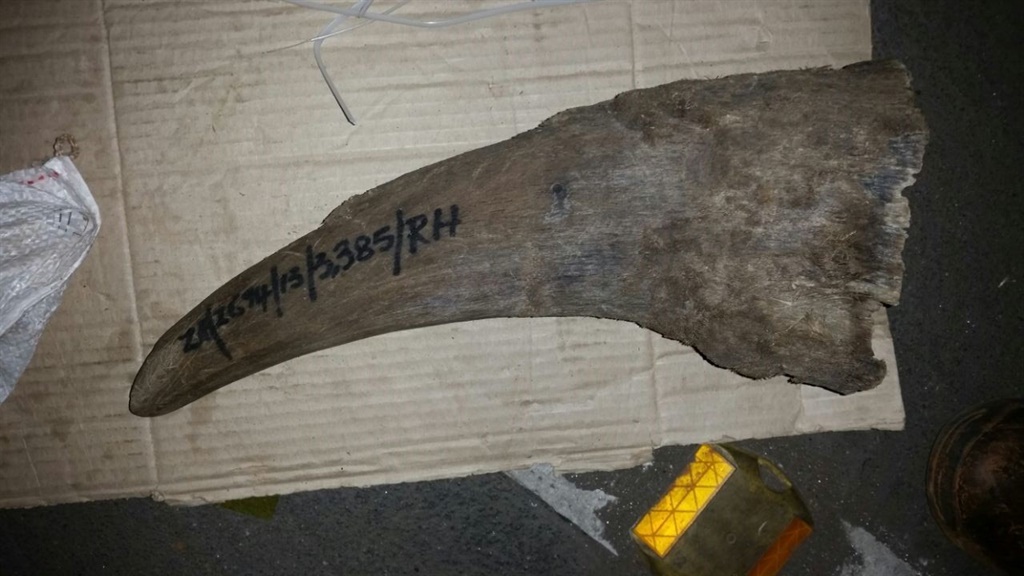 One of the rhino horns seized by the Hawks.
PHOTO: Supplied by Hawks

The owner of a wildlife sanctuary in Mpumalanga has been sentenced for selling five rhino horns without a permit.

The Middelburg Regional Court ordered Deon Cornelius, 48, the owner of Ubhetyan-o-Africa, to pay a fine of R10 000 or serve three years in prison. In addition, Cornelius has to pay R50 000 to the Mpumalanga Parks Board.

According to Mpumalanga Hawks spokesperson, Captain Dineo Lucy Sekgotodi, on 4 January 2018, the Hawks acted on information that a suspect from Gauteng was buying rhino horns from Cornelius without a permit.

Along with members of the police's dog unit, they conducted an operation on 5 January 2018 in which the suspect was stopped and searched after arriving in a white Lexus in the early hours of the morning.

The horn of a white rhino, worth R175 000, was found attached to the chassis of the vehicle. Cable ties were used to hold it in place.

An amount of R699 129 in cash was also seized and a man and a woman, Yansen Feng and Lui Li Hong, were arrested.

On 12 January 2018, after a follow-up investigation, Joseph Albertus Du Plessis and Susanna Johanna Du Plessis were arrested in Bloemfontein.

Cornelius was later also arrested and charged. He was sentenced on Monday.

Yansen was also sentenced to 18 months in prison, suspended for five years. He has to pay R1 million to Stop Rhino Poaching.

We live in a world where facts and fiction get blurred
In times of uncertainty you need journalism you can trust. For only R75 per month, you have access to a world of in-depth analyses, investigative journalism, top opinions and a range of features. Journalism strengthens democracy. Invest in the future today.
Subscribe to News24
Related Links
OR Tambo customs officials seize rhino horns worth R117m
Four caught in possession of a rhino horn and protected plants
Three alleged rhino horn syndicate masterminds arrested
Next on News24
WRAP | Medical aid or not, you won't have to pay for a Covid-19 vaccine upfront

3 bag R139K in the Daily Lotto jackpot
Full list of lottery results
Lockdown For
DAYS
HRS
MINS
Voting Booth
How has the delay in schools' opening impacted your life?
Please select an option Oops! Something went wrong, please try again later.
It's a disaster! We're struggling to manage work and kids at home
41% - 2549 votes
It's a struggle, but we learnt lessons from last year's closures
20% - 1206 votes
It's a relief, this second wave is bad and kids need to be at home
39% - 2409 votes
Previous Results
Podcasts
PODCAST | MISSING MATTHEW EPISODE 3: Decades of false starts add to a family's despair