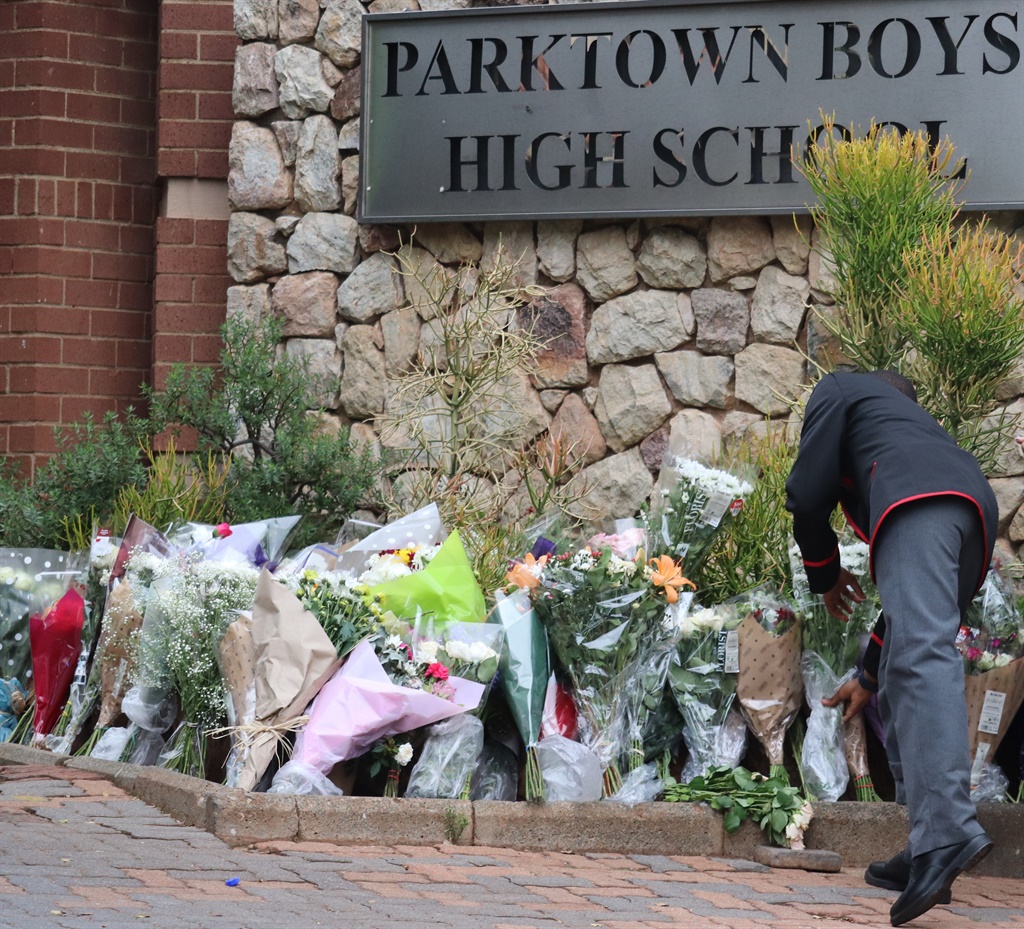 A learner places flowers outside the school during the silent protest. Picture: Palesa Dlamini

While the lawyers representing Enock Mpianzi's family prepare for a strong civil and criminal case against those implicated in a forensic report on his death that was released on Wednesday, it has come to light that Parktown Boys' High School is planning a trip to Eastern Europe.

Gauteng Education MEC Panyaza Lesufi announced that the school had sent his office an application seeking approval. Lesufi made this announcement on Wednesday night after the forensic report surrounding the circumstances leading to the death of the 13-year-old Mpianzi was released by Peter Harris of Harris and Nupen Molebatsi Attorneys (HNM).

The law firm that compiled the report found that there was gross negligence and recklessness by the school, the school governing body, the headmaster, William Malcolm, and Nyati and River Break Lodge and its staff.

It has emerged that the school has since sent Lesufi's office an application seeking approval for a trip to the Czech Republic.

"Today [Wednesday] I received a request from this school to authorise a trip to go to [the Czech Republic]. I just set aside the report and said maybe let me go through this pain first [and] I'll come back and decide whether we need to authorise," Lesufi said.

Speaking on the same issue during an interview on PowerFM's POWER Breakfast show on Thursday, Lesufi said the application was on his desk, saying he was in a state of shock that the school still wants to take pupils on trips, and even worse, outside the country.

"Can you really say we have learnt out of this? I am in a state of shock that we still believe nothing has happened and that we want to go to countries and we don't make analyses," Lesufi said on the show.

Meanwhile, Ian Levitt Attorneys, acting on behalf of Mpianzi's family, said they were preparing papers for both a criminal and civil case against all those implicated in the report.

"Anyone along the journey of this tragedy, in the negligent killing of Enock Mpianzi will [face] criminal charges," Levitt told News24.

The law firm is studying the lengthy report, which it only received on Wednesday.

Levitt said they were also in the process of an independent investigation surrounding the circumstances that led to the boy's death.

"In order to sue government, you have to send a letter of demand 30 days prior to issuing summons. With regards to the criminal charges, we think that the investigation should be completed also within the time frame of 30 days and thereafter criminal charges will be laid," Levitt said.

The report also found the campsite was reckless in allowing the pupils to go into the river without life jackets and that there were not enough coordinators during the water activity.

The education department said it had begun the process of taking action against those implicated in the report.

"But, most importantly, we are weighing all our legal options on the current and previous cases. We also feel there are other state institutions that must come on board to assist us to enforce this matter," Lesufi said on Wednesday night.

We live in a world where facts and fiction get blurred
In times of uncertainty you need journalism you can trust. For 14 free days, you can have access to a world of in-depth analyses, investigative journalism, top opinions and a range of features. Journalism strengthens democracy. Invest in the future today. Thereafter you will be billed R75 per month. You can cancel anytime and if you cancel within 14 days you won't be billed.
Subscribe to News24
Related Links
Enock Mpianzi death: Nyati Bush Lodge had 12 life jackets that were not issued, report reveals
Enock Mpianzi's heartbroken family say they understand why report into his death must be released
Enock Mpianzi death: Family to be consulted before release of forensic report
Next on News24
BREAKING NEWS LIVE | Western Cape High Court declared safe after bomb threat