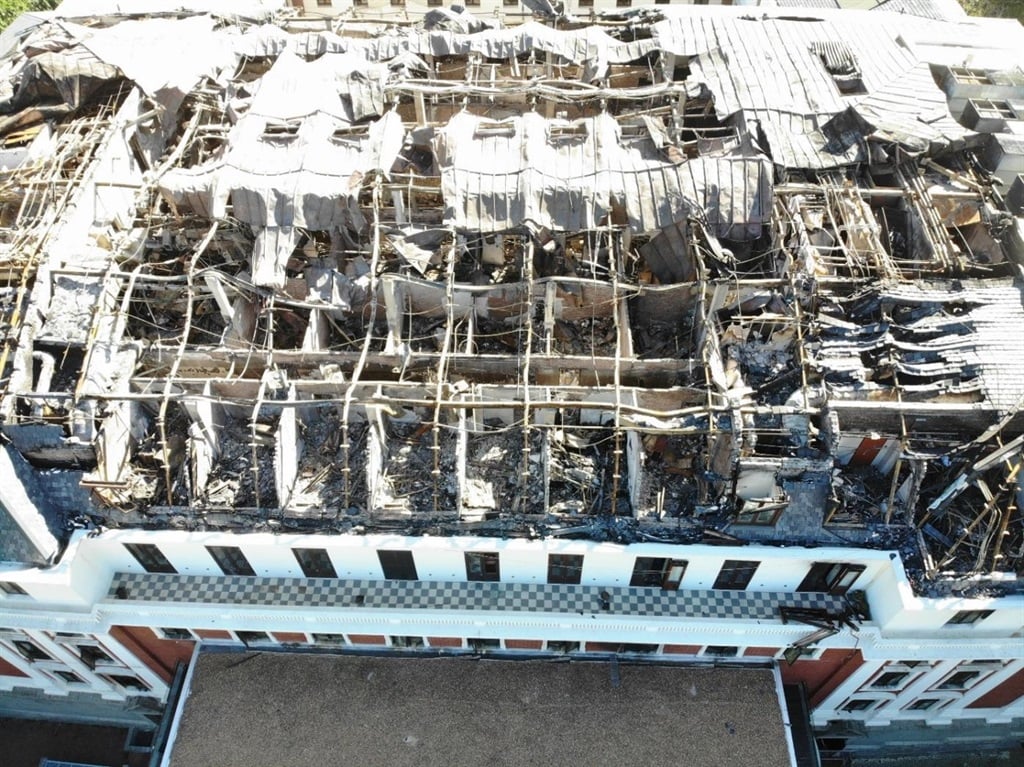 The roof of the National Assembly wing after it was razed by a fire. The picture was in a presentation to Parliament.
Coega Development Corporation/DPWI

There are still no clear answers as to when contractors will start rebuilding the gutted National Assembly (NA) building.

While several assessments and other technical reports have been compiled and some submitted, the Department of Public Works and Infrastructure (DPWI) seems nowhere near a start date for construction work.

On Friday, the department, police management and the SA Heritage Resources Agency briefed Parliament's Joint Standing Committee on Financial Management on efforts to rebuild the NA after the devastating 2 January fire.

Christo Beukes, programme manager at Coega Development Corporation (CDC), told MPs they requested an extension for the submission of the report due to the extent of water damage identified in the Old Assembly building.

This, he said, required further detailed assessments of the entire building.

The CDC was appointed to conduct an independent assessment of the fire damage at Parliament.

"[The] CDC team drafted the detailed preliminary report and planned to be presented to DPWI on 12 May 2022 by all professional disciplines. The CDC team [would] then review and effect final changes to the preliminary detailed report for the official issue of the final detailed report by 20 May. It is anticipated that the final signed report by Coega and DPWI will be available before the 27 May," he said.

Beukes said the second phase of the report would provide indicative timelines for the planning and construction stages for the restoration work for each building.

"The above durations will be informed by the full extent of construction works required, construction methodologies and complexities, and DPWI implementation processes to be expedited for earliest construction commencement on the damaged buildings," he said. Certain parts of the National Assembly wing of Parliament has been declared no-go zones. The picture was in a presentation to Parliament.
Supplied Coega Development Corporation/DPWI

The full extent of the damage, whether the building should be repaired or taken down and rebuilt, and what it will cost, will form part of the second phase report.

On 2 January, a fire gutted the NA building, which damaged some offices on the ground floor of the building. The entrance lobby suffered some damage due to intense heat and smoke, but no structural damage.

Meanwhile, police management told MPs the Division Protection and Security Services (PSS) had concluded its internal work with other role-players on the parliamentary precinct.

"An action plan is being finalised in terms of internal shortcomings identified. The disciplinary investigations were concluded, and the hearings of the three PSS members are in process. Additional static protection deployments through overtime payment have been implemented at the precinct," their presentation read.

Work is currently underway for the maintenance contract of current security systems, including CCTV and access control.

There is also an enhanced perimeter barrier and upgrades to five entrances at the parliamentary precinct.

The final scope of the project is now deemed concluded after receiving the heritage permits from the SA Heritage Resources Agency, which was issued on 25 February 2022.

There is also an upgrade of the main security control room.

2 bag the Daily Lotto jackpot!
Full list of lottery results
Voting Booth
Are you going to keep wearing a mask following the announcement that it is no longer required under law?
Please select an option Oops! Something went wrong, please try again later.
No ways, I'm done
5% - 6355 votes
Yes, I still want to be cautious
89% - 109643 votes
Only certain circumstances
6% - 7878 votes
Previous Results
Podcasts
PODCAST | The Story: We unpack the Eastern Cape tavern tragedy