More than 100 residents of Gatesville, Cape Town, staged a picket outside little Abirah Dekhta's primary school in Rylands on Friday to show their support for the family as they anxiously await her safe return home after being kidnapped a week ago.

Abirah's classmates all gathered on the school grounds holding placards and chanting "bring back Abirah", "bring back our friend".

Gatesville Neighbourhood Watch chairperson Fowzia Veerasamy said the purpose of the picket was to spread the message that residents "will not tolerate the kidnapping of our children".

"When we walked down to the school, it was a very emotional scene as we watched the schoolchildren chant 'bring back our friend' while holding up their big placards. There honestly wasn't a dry eye in sight as we watched the kids show their support for their friend."

We want to raise awareness that this kidnapping of our children is not on, and we are supporting the family one hundred percent, and pray for little Abirah's safe return home.

A spokesperson for the Dekhta family, who asked to remain anonymous, said the family was ''deeply touched'' by the initiative taken by residents.

"During this extremely difficult time, it is wonderful to know that we have a strong support system wanting exactly what we want – to bring our dear child back home.

"It's not been easy for us to deal with this ordeal, but we have to stay strong for everyone, including her four siblings," said the emotional family member.

The family spokesperson added that Abirah's parents were barely coping and not doing well.

They are still in shock. They're struggling to eat and sleep because they are worried about their daughter's well-being. They don't leave their cellphones, just in case the kidnappers make contact with them again. We just want our girl to be returned to us safely and very soon.

The family confirmed that the kidnappers had contacted them.

"Yes, the kidnappers made contact with the family already but at this stage, I don't know what amount of ransom was asked as that information remains with the parents," said the spokesperson.

"Kindly be advised that there are no new developments and that the Provincial Organised Crime Unit is continuing the investigation into the matter," said Twigg. Staff members of Melomed Gatesville Hospital joined in the picket outside the school.
Photo Supplied 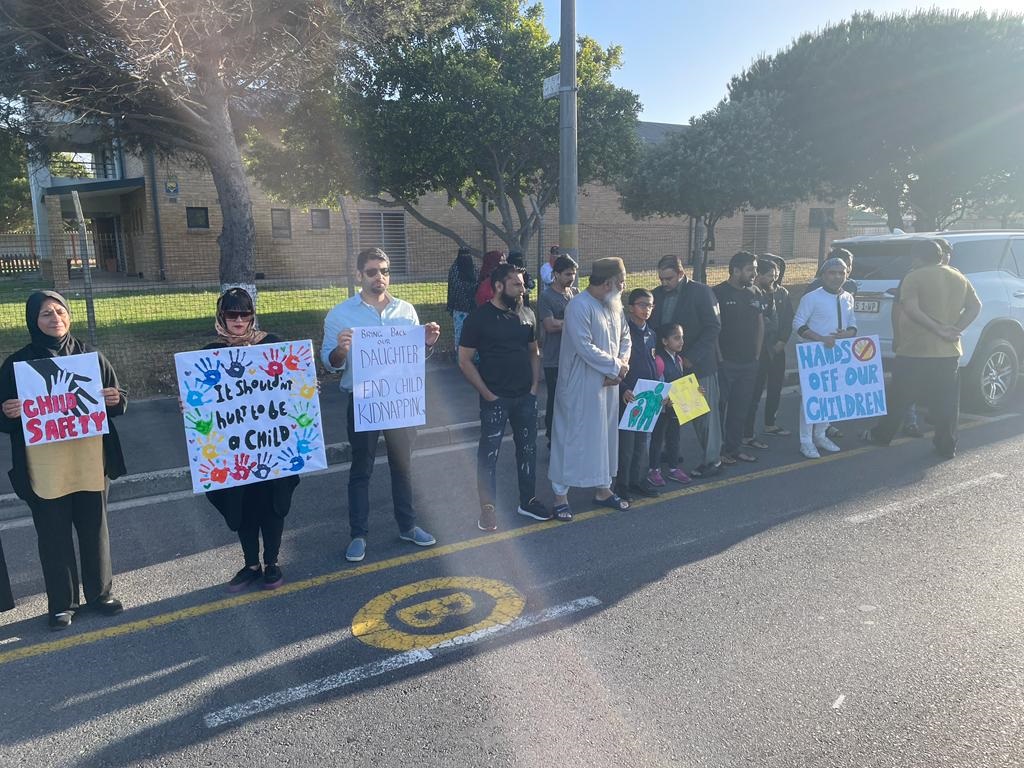 Veerasamy said once the school bell rang for pupils to go back into their classrooms, the protesters peacefully walked from the school back to Amber Court along Yusuf Gool Boulevard, where the kidnapping took place.

"Once we all gathered at the scene of the kidnapping, both Muslim and Christian prayers were held to keep Abirah safe in this difficult time," said Veerasamy.

On Friday evening, residents plan to picket along Hazeldene Road, where it's understood the family business is located, and again proceed to the scene of where Abirah was taken.

"We plan to go to where the kidnappers' vehicle was parked before taking Abirah and then do prayers where we will plead to have her back home safe and sound," said Veerasamy.