The police launched its Covid-19 vaccination drive at Orlando Stadium in Soweto, Johannesburg, on Monday.

Acting Health Minister Mmamoloko Kubayi-Ngubane was also at the site to monitor the process.

The police plans to vaccinate more than 180 000 members at 108 sites across the country.

The initial programme will kick-off on Thursday, 8 July.

Speaking before getting his jab, Cele said the sector was elated the programme had finally reached it.

"I guess it is one beautiful morning for us as the SAPS family. We are really elated. We have been looking forward to this day. We have been trying to reach this day. It has been a long walk to [get] here, especially from the family of SAPS..."

However, he added, it was regrettable and sad the vaccine programme had reached the sector after it had lost about 672 members to the virus. "Today, 900 of us will be injected, starting with me and the national commissioner. And we believe that will help this family of SAPS to be able to work and be protected so that we can be able to protect other people."

He added he hoped the programme would not take long and that all members across the country would heed the call to vaccinate.

Kubayi-Ngubane said the rollout to the police sector was a milestone in the country's vaccine programme.

She added the Department of Health would soon announce the dates for metro police and correctional services officials to have their turn. 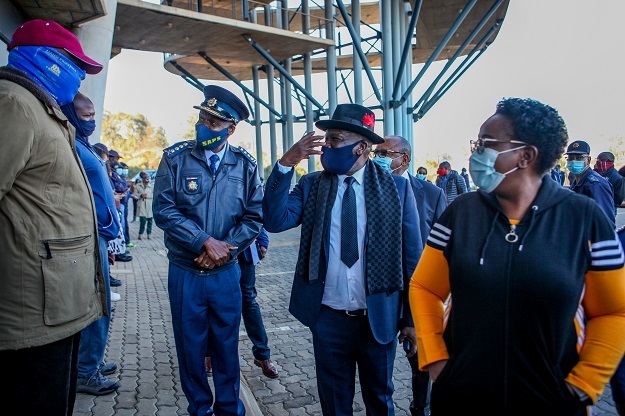 "This is a milestone as we look forward to herd immunity in the country. Quite a lot of progress [has been made] around the vaccine programme as you have seen Sahpra last week announcing the approval of Sinovac as well. Which becomes one of the things that boost our morale and boost positively towards our vaccine programme because it means that we now have multiple vaccines that are available to us."

Kubayi-Ngubane said the department continued to engage scientists about using the AstraZeneca vaccine, although there was still some caution around its use.

South Africa sold its AstraZeneca vaccines in March after they arrived in February. News24 reported it was not effective for the 501Y.V2 variant.

Kubayi-Ngubane thanked stakeholders, including medical aid scheme Polmed, for their joint efforts to ensure the rollout got under way.

She added over and above that, the scheme offered its members vitamins to boost their immune systems before the rollout.

"For the vaccine, we are looking at almost R300 million if all or majority of our members are vaccinating because the intention is to assist [the Department of Health] and the country in getting herd immunity.

"So, we have the retired police, the medically boarded, and we also have the dependents of the fallen heroes in Polmed, and that's why you will have 30 000 of the continuation members, but the active SAPS members is 140 000."

She urged members to head to sites and avoid bogus facts around the vaccines.

"For active members, if you work for SAPS, it doesn't matter whether you are a Polmed member or a Gems member; please visit those vaccination sites. We have 108 of them. No need to register, you are already registered, and you just need to show up and get your jab."