A young male elephant's curiosity landed him in a pickle as he managed to get a tyre entangled over his head.

According to the North West Department of Economic Development, Environment, Conservation and Tourism, its Directorate of Biodiversity Management received a call earlier this week from community members of Braklaagte/Lekubu about the elephant. The animal was spotted at the adjacent Rietfontein Game Ranch, north of Zeerust.

"Our problem animal control officers and support staff were dispatched urgently to try to find the elephant, so as to remove the tyre which undoubtedly was causing a lot of discomfort," the department said in a statement.

Under the current Covid-19 lockdown period, a number of operators are on standby for such operations, and veterinarian Dr Paul Bartels and helicopter pilot Tokkie Botes of Flying for Freedom SA were dispatched to the area. The team was assisted by rangers from the Madikwe Game Reserve, one of the parks to the north, and a coordinated effort was made with a ground and airborne team to find the elephant.

"The compromised elephant was found fairly easily based on the last reported sightings from the community. Once darted, it was ascertained that it was a teenage male, and the team worked quickly to remove the tyre that was probably impacting upon its feeding.

Done in a matter of hours

"The operation was done relatively quickly in a matter of hours, and it is thanks to efficient coordination of our own staff, those with specialist expertise and our airborne team, which waived its fees as this was a genuine conservation effort."

Elephants are a protected species under the Biodiversity Act's Threatened and Protected Species Regulations, and efforts such as these are to be made regarding their survival. 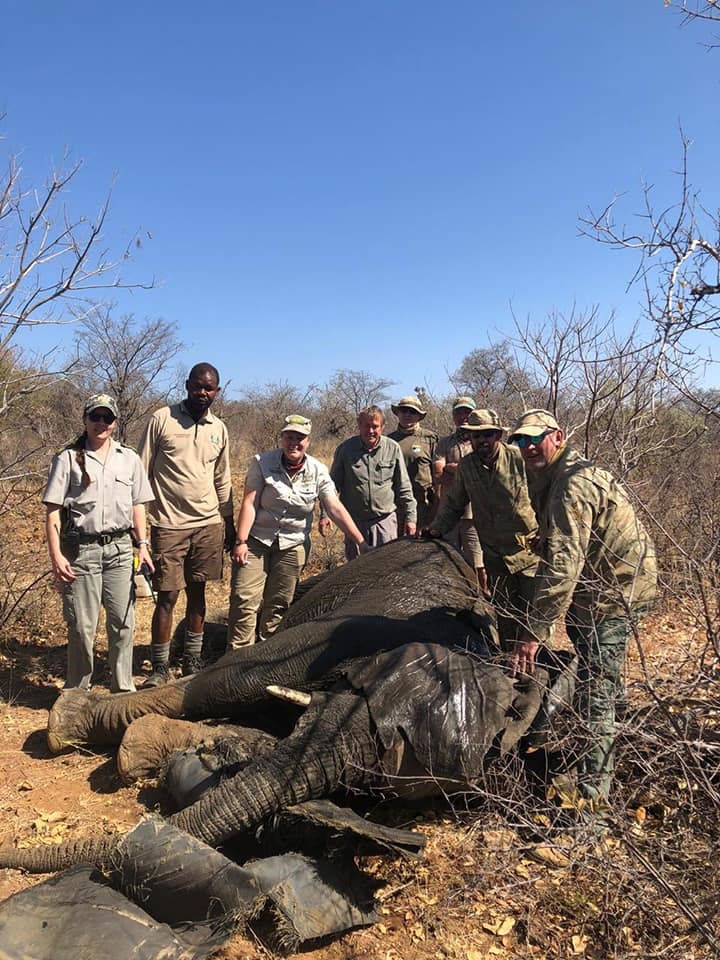 This particular ranch has a small herd of free-ranging elephants that have surprisingly not ever been in conflict with neighbouring communities, and uniquely it is now community owned, the department said. The community wishes to see the benefits of having such species roaming their properties, such as tourism, the department added.

Picked up tyre out of curiosity

"Being such large animals, and given the small areas where they may reside does present challenges regarding their management. Small ranches being converted into reserves often have items of past usage by humans on them. Sometimes landowners use tyres in an anti-erosion capacity, such as placing them in eroded dongas, and we can assume this elephant may have picked one up out of curiosity, and the tyre spiralled down its trunk to its mouth area," the department added.

"We applaud community members in the area for noting the anomaly and reporting this to the department. This is what ultimately led to a successful operation carried out in a quick and efficient manner."

We live in a world where facts and fiction get blurred
In times of uncertainty you need journalism you can trust. For 14 free days, you can have access to a world of in-depth analyses, investigative journalism, top opinions and a range of features. Journalism strengthens democracy. Invest in the future today. Thereafter you will be billed R75 per month. You can cancel anytime and if you cancel within 14 days you won't be billed.
Subscribe to News24
Related Links
Illegal ivory trade shrinks while pangolin trafficking booms, UN says
Botswana reports mysterious deaths of hundreds of elephants
South Africa has cut rhino poaching by half, says Creecy
Next on News24
BREAKING NEWS LIVE | Two men arrested with explosives near SA-Zimbabwe border