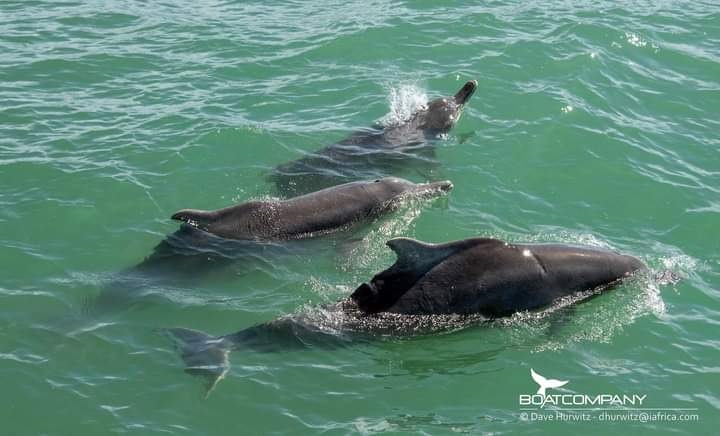 Three rare humpback dolphins have been spotted along the False Bay coast, causing quite a stir in the area.

"These are endangered animals and the estimated total population in South Africa of the Atlantic humpback dolphins is between 250 and 500," he told News24.

The dolphins are called humpback because of the distinctive hump on their backs, with a small dorsal fin on top of the hump.

"One would always find scars on these specific dolphins because they are often attacked by sharks," Hurwitz added. Since the sighting last week, it had since been established that one of the three humpback dolphins was familiar to the area and had been sighted between Muizenberg and Kleinbaai (Gansbaai) several times.

"It unfortunately has a broken rostrum (nose). This is not unusual for humpback dolphins and generally does not affect their ability to feed. The other two dolphins are exciting new sightings and will be added to the national database," Hurwitz added. A pod of Killer Whales were recently spotted out in the False Bay area.
Photo Supplied Supplied

According to Hurwitz, the animals were seen on Friday morning just past Fish Hoek and it's thought they may frequent the bay area. Killer whales have the prowess to attack dolphins and sharks.
Supplied

Kock said Indian Ocean humpback dolphins were classified by the International Union for Conservation of Nature (IUCN) as endangered because the population was extremely small, with fewer than 500 dolphins remaining, and declining. The tail of one of the whales spotted out in the bay area.
Supplied

"We ask that people respect their presence and keep their distance and abide by the regulations if encountering them on the water,"  said Kock.

SANParks said there was a small pod of humpback dolphins in False Bay, but they were very elusive and rarely seen. They also rarely visited the western side of False Bay, so the sighting inside the TMNP-MPA was very unusual, he said.

Kock added that the dolphins were "very shy and thus rarely seen".

Director of Sea Search and Research Associate with Stellenbosch University Simon Elwen told News24 that in South Africa humpback dolphins were the only endangered marine mammal. "Each dolphin has its own 'signature whistle' - which is effectively a name they use when socialising and contacting each other by deploying a set of hydrophones or underwater microphones for a few weeks at a time... we can record these whistles as the dolphins swim past... for 24 hours a day for weeks on end; it's quite fascinating," he said.

Hurwitz, in turn, said in his 30 years at sea, he still enjoyed every minute of experiencing first-hand encounters. One of the whales diving.
Photo Supplied Supplied

"I wouldn't change my job for anything else in the world. I have an absolute love for all marine fauna, especially killer whales and just last week Sunday a pod of seven orcas was spotted in the False Bay region possibly looking for their next meal. These creatures fascinate me," he said.

"The last time we've seen humpback dolphins was back in 2012 when there were about seven of them swimming off Strandfontein Pavilion. I just hope that these three dolphins are not the last of that pod," he said.

Lucky Sunday for 3 Daily Lotto players
Full list of lottery results
Lockdown For
DAYS
HRS
MINS
Voting Booth
Children between 12 and 17 can now be vaccinated against Covid-19. As a parent I am:
Please select an option Oops! Something went wrong, please try again later.
Relieved, it's been a long wait to this point
49% - 506 votes
A bit hesitant, and will wait to see how it goes
20% - 211 votes
Completely against my child getting the shot
31% - 315 votes
Previous Results
Podcasts
PODCAST | My Only Story: Fiddling, sex jokes and flirting – another water polo coach exposed