Protest outside of the United Arab Emirates embassy in Pretoria, to have the Guptas extradited.
News24/Alex Mitchley

Civil society organisations protested outside the United Arab Emirates (UAE) embassy in Pretoria on Thursday to demand the extradition of the Guptas so that they can be tried in South Africa for their alleged roles in state capture.

Standing in a row in front of the embassy, protesters held up placards with slogans such as "The Guptas are wanted men" and "Bring back the Guptas, make them pay".

They sang struggle songs as a large contingent of private security officials stood by and watched.

The protest comes after the UAE's ambassador to South Africa released a statement to say that agreement between South Africa and that country on mutual legal assistance in criminal matters and extradition was signed in 2018 and ratified in April this year. Protest outside of the United Arab Emirates embassy in Pretoria, to have the Guptas extradited.
News24 News24/Alex Mitchley

The statement was issued just days after the National Prosecuting Authority's (NPA) Investigating Directorate (ID) asked Interpol to circulate an international arrest warrant to have the Guptas deported to South Africa to stand trial for fraud and money laundering, News24 previously reported.

The State issued arrest warrants for Gupta brothers, Atul and Rajesh, and their wives, Chetali and Arti, as well as a number of business associates, in connection with R25 million spent on a feasibility study to determine the viability of the failed Estina dairy farm in Vrede in the Free State.

ID head Hermione Cronje has asked Interpol to circulate the red notice. The Gupta brothers fled South Africa in 2018 and are reportedly in the UAE.

I never thought that 27 years after our freedom, I would be protesting in the streets again, and this is where we are.

"Towards the end of the year, it became clear to us that as efforts [were ongoing] to clean up [the] government, and investigate [allegations and] commissions etc, were doing their work, the criminal brigade was organising a huge pushback to make sure that they never go to prison."

"They were prepared to bring the country down. They had to bring it down instead of going to prison."

"The Guptas made a big mistake. They touched the wrong country. In this country, we are not going to die because of people who capture our leaders [and] threaten our lives."

Ahmed Kathrada Foundation director Neeshan Bolton said the protest was about demanding accountability for the Guptas' roles in state capture and ensuring their extradition.

"Our purpose here is to call for the speedy implementation of the terms of the agreement which will hopefully result in the Gupta families and their associates being brought back to the shores of South Africa to come and stand trial," Bolton said. 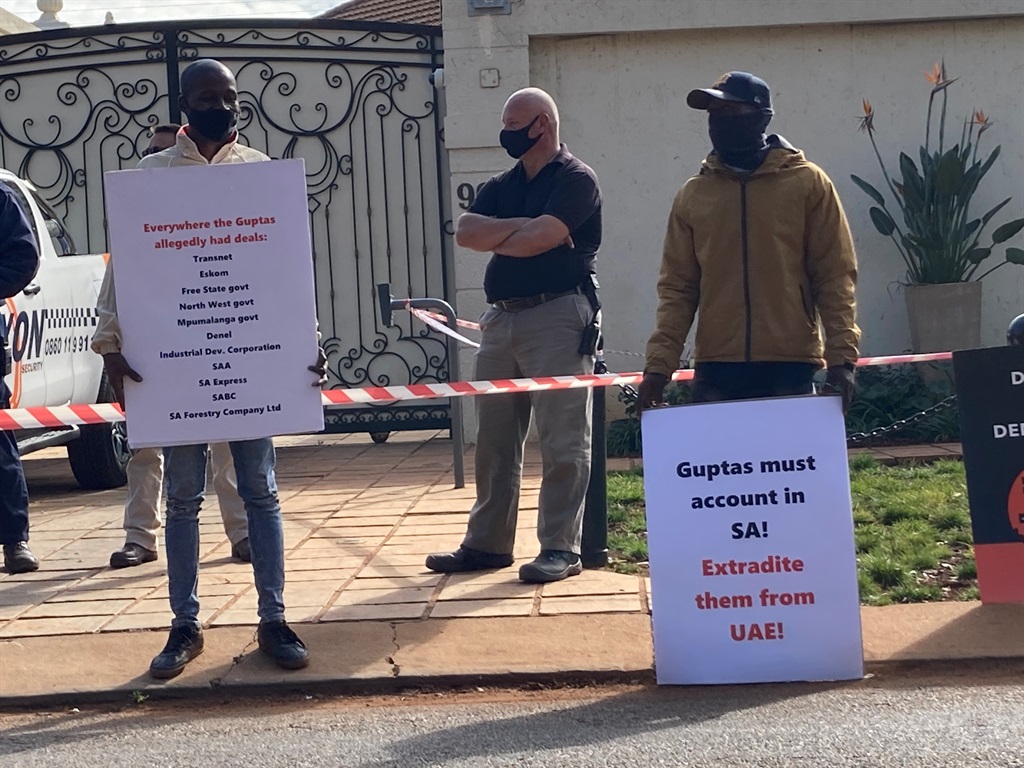 Protest outside of the United Arab Emirates embassy in Pretoria, to have the Guptas extradited.
News24 News24/Alex Mitchley

He added that the UAE should also ensure that the Guptas did not flee to another country where South Africa would not be able to have them extradited.

"There must have been awareness of this family and all that they have been implicated in, but it had taken a fairly long time to get the agreement signed, so they shouldn't be difficult to find."

In its memorandum to the UAE embassy, the foundation welcomed the announcement that the extradition treaty had been ratified and that the Guptas had been formally charged in the Estina matter.

"While we seem to be at the cusp of some success in securing their return to South Africa to account for their deeds, we remain concerned about the actual implementation of the extradition treaty."

The memorandum called on the UAE and the South African governments to:

- Act on the extradition treaty as a matter of urgency.

- Strongly consider seizing the financial assets of the Guptas in the UAE.

- Indicate to the South African public what actions the UAE will take with reference to the arrest warrants.

After the protest, a memorandum was placed under the embassy's gate.