The Kuchale family before Shadrack's horrific ordeal that left him permanently paralysed.

A Johannesburg man has been left permanently paralysed after armed robbers attacked and forced him to withdraw cash at an ATM, then shot him in the neck and left him for dead in the street.

Shadrack Kuchale, 40, who worked as a maintenance man at a complex, was on his way to work when he was targeted in September last year. More than eight months later, he is still in disbelief that he has been left permanently paralysed, while his attackers are still roaming the streets.

The father of two clearly remembers the day his life changed forever, and says he is constantly being reminded of what the robbers did to him.

I was walking to work when out of nowhere these two men wearing black balaclavas just approached me and held the gun to my face, while demanding my cellphone and dragging me to the bank to withdraw my money. They shot me and left me for dead. I remember lying in the street while waiting for what felt like an eternity for medical help.

He added that he felt his legs go lame, almost like it was leaving his body.

"I just had a feeling that I will never walk again. When I eventually got to a local government hospital, I remember waiting close to 12 hours for a bed before being admitted," Kuchale added.

Now, more than six months later, he recalls that after being assessed by a neurosurgeon and undergoing a CT scan, his worst fears were realised.

"The bullet from the attack entered the highest part of my spine, shattering my spinal cord, and then travelled to my lung and severely punctured it. Now, I'm completely paralysed from the shoulders down and will remain a quadriplegic for the rest of my life." 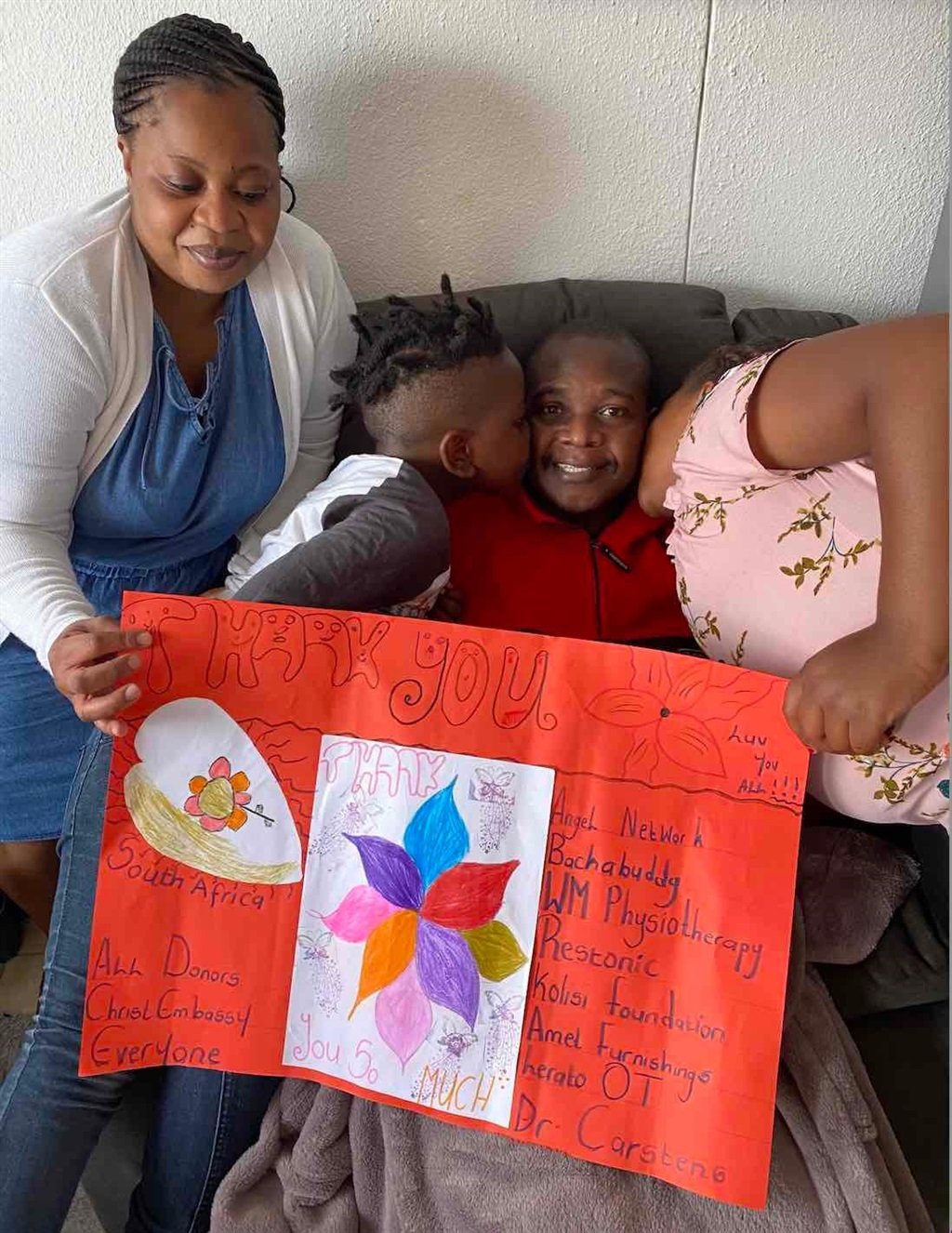 The Kuchale family at their family home in Cosmo City.
Photo Supplied

Kuchale added that no amount of physiotherapy will be able to restore his spinal fluid or body movement.

Before his life-changing ordeal, Kuchale was the breadwinner and took care of his wife, Eunice, and two children, aged 8 and 11.

"I used to earn R6 400 a month, but the money I earned was able to put food on the table and help my kids through school. Now I don't know how I will take care of my family."

Kuchale's caregivers, Carin Silberman and Gail Mabalane, described him as a "beacon of hope" in his community, and a true leader who everyone "admired and looked up to". Shadrack when he was in hospital after being shot at in the neck by armed robbers.
Photo Supplied

"Shadrack (Kuchale) and his wife, Eunice, who is employed as a domestic worker, have faced tremendous financial pressure dealing with their new reality and could use all our continued love and support. They have a long road to healing ahead of them, both physically and emotionally," said the carers.

Silberman recalled the moment doctors called to tell the family that Kuchale was being discharged.

"When we fetched him, it was difficult to get him into the car. We had no idea how to even manoeuvre him to get him safely in the car as we had no help or guidance from the hospital staff. When we eventually got him inside, we then drove Shadrack and his wife to their home in Cosmo City. His two children ran down the road shouting 'Papa, Papa', only to find Papa can't hold them anymore," said Silberman.

Kuchale said all he wanted was to be able to provide for his family, find a job that gives him a purpose and meaning in life, and a hobby that can give him his peace of mind back. Kuchale leaving the hospital after his shooting ordeal which left him permanently disabled.
Photo Supplied

"Most of all, I want to continue being the hero I have always been in my home and get back some of the dignity that was taken from me," he added.

Kuchale said his entire life changed in the blink of an eye, leaving him "traumatised" because he is no longer able to do what he used to do.

"Days feel like years. I find myself staring at the walls more often because I'm not able to do anything. It's hard having to deal with the fact that I now rely fully on others to help care for me. I still pray daily for a miracle because I still have faith that I will walk again," added Kuchale.

To help Kuchale cover his ongoing medical costs and living expenses after the life-altering attack, a non-profit organisation The Angel Network launched a crowd-funding campaign on BackaBuddy to lend a helping hand. 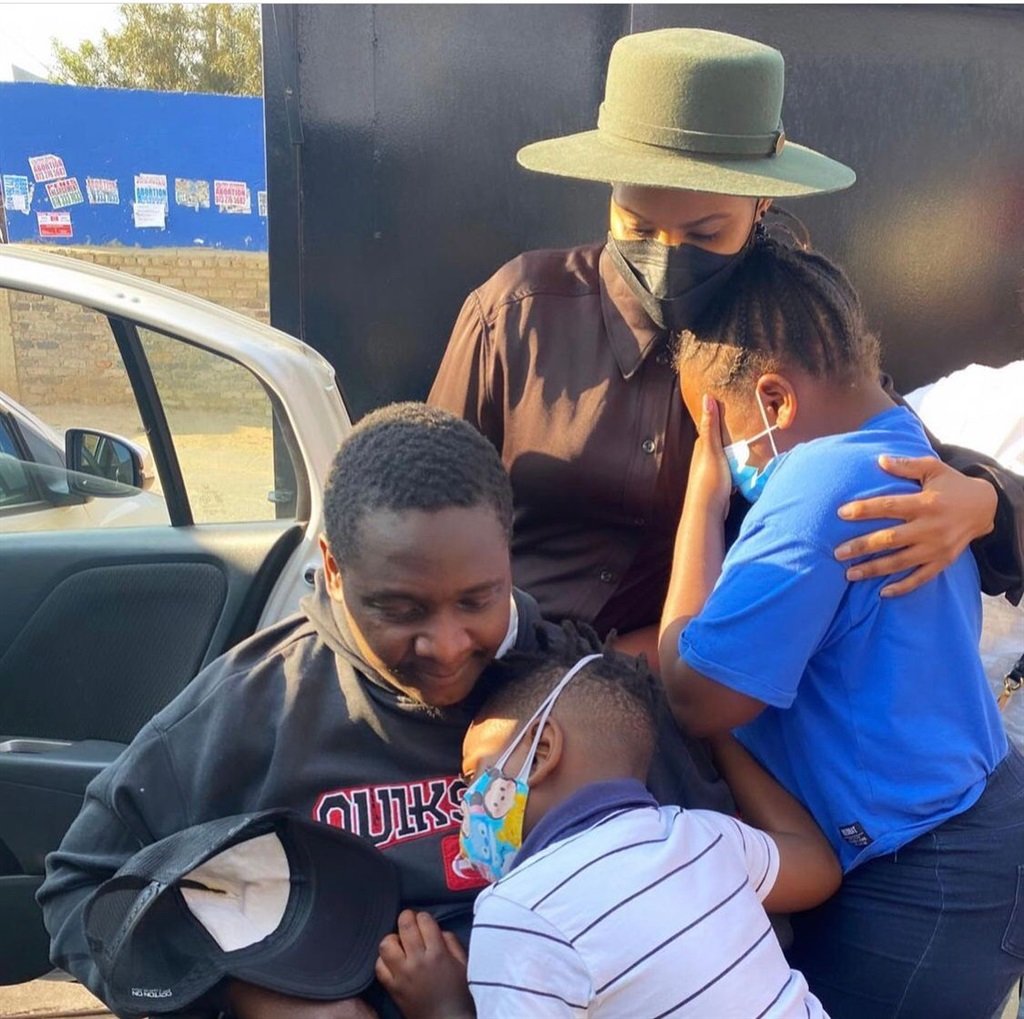 Due to Kuchale's injuries, he is no longer able to hold his children,
Photo Supplied

Since the campaign launched, more than R350 000 has been raised to support Kuchale and his family with medical costs as well as monthly expenses such as rent, food and school fees.

"I would never have imagined that so many people would open their hearts for me in my time of need and carry me on their shoulders during my darkest moments. Without the donors, I don't know how I would have made it to this point. Thank you will never be enough," he said.

The funding has since run dry but the family has already turned their focus on getting Kuchale a wheelchair so that he can move around and not be housebound all the time.