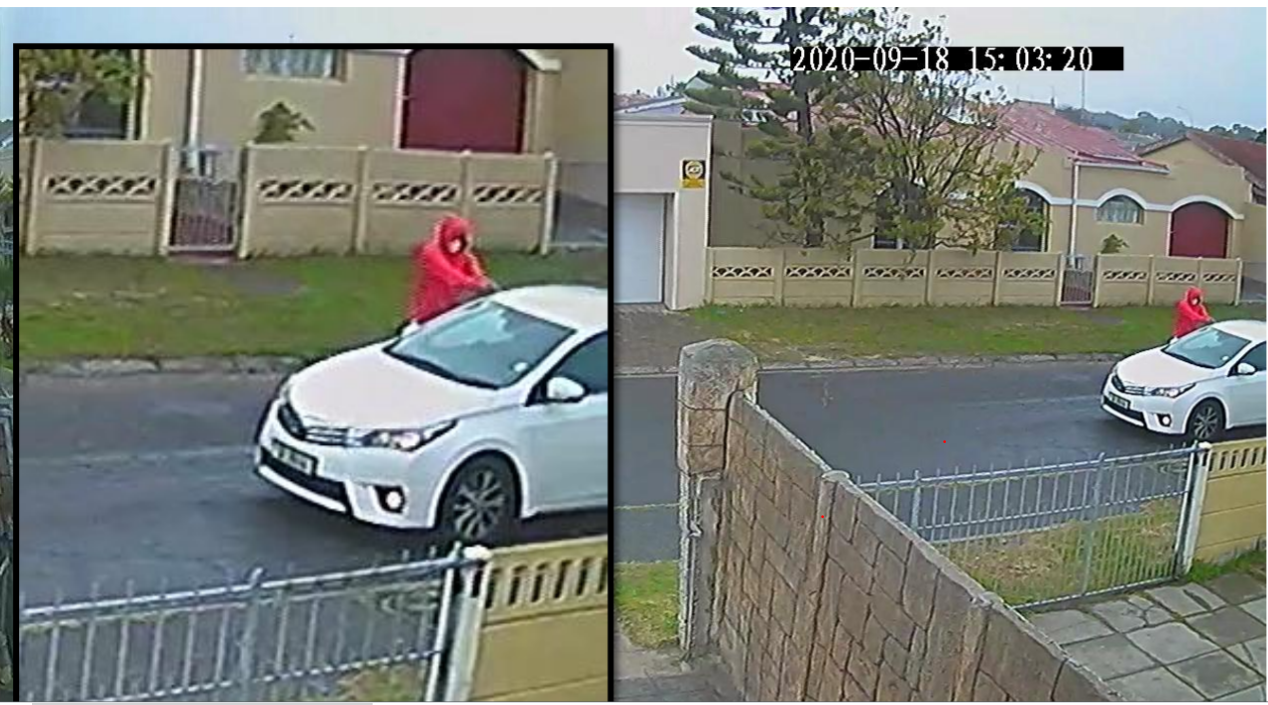 Images of the footage, published by Netwerk24, show a man in a red hoodie and black Adidas sweatpants making his way down Gearing Street in Bishop Lavis where Kinnear lived. It also captured the moment Kinnear was shot five times as he sat in his car outside his house.

The footage was taken by several CCTV cameras as he loitered the area. But at 15:02:50, he was captured by Kinnear's own security cameras.

He can be seen walking on the sidewalk opposite Kinnear's house, holding his hands behind his back.

Thirty seconds later, the man can be seen next to Kinnear's car, and although the image is slightly obscured, it appears that he is pointing a firearm at Kinnear. This was the moment Kinnear was shot several times.

News24 earlier reported that video footage could form part of the investigation into the murder. The killer seen opposite Kinnear's house with his hands behind his back.
Netwerk24 Supplied Charl Kinnear's murderer next to the detective's vehicle, holding what appears to be a firearm.
Netwerk24 Supplied On Thursday, police arrested a 39-year-old man in connection with the murder of Kinnear, who was a senior member of the Anti-Gang Unit.

The man, who appeared in the Bishop Lavis Magistrate's Court on Friday, is former professional rugby player Zane Kilian.

Kilian was charged with murder, conspiracy to commit murder and the illegal interception of communications. The latter charge is believed to be linked to the tracking of Kinnear's cellphone.

He will appear in court again on 5 October. More arrests are expected.

In a statement, national police commissioner General Khehla John Sitole said: "We are all saddened by this tragic untimely loss of Colonel Kinnear and his murder is a huge loss to South Africa and its people."

Police Minister Bheki Cele said Kinnear was "failed" by the police. The minister said this at a briefing in the Kinnear family's driveway on the day after he was murdered, after spending almost an hour with Kinnear's wife Nicolette and sons, Carlisle and Casleigh.

"I must say unfortunately, at the moment, there are more questions than answers … but right now, as it stands, it does look like we have failed as the police. We could have done things better."

Cele said he would not hesitate to ask President Cyril Ramaphosa for additional resources, if needed, to track down Kinnear's killers.

We live in a world where facts and fiction get blurred
In times of uncertainty you need journalism you can trust. For only R75 per month, you have access to a world of in-depth analyses, investigative journalism, top opinions and a range of features. Journalism strengthens democracy. Invest in the future today.
Subscribe to News24
Related Links
Charl Kinnear was close to solving 'guns to gangs' case before being killed - report
What we know about the man charged for slaying top cop Charl Kinnear
Charl Kinnear murder: Video footage may form part of police investigation
Next on News24
LIVE | Omicron: Mexico's first case is traveller from SA