PICS | 'Our houses look like a river': storms cause bad flooding in parts of Cape Town 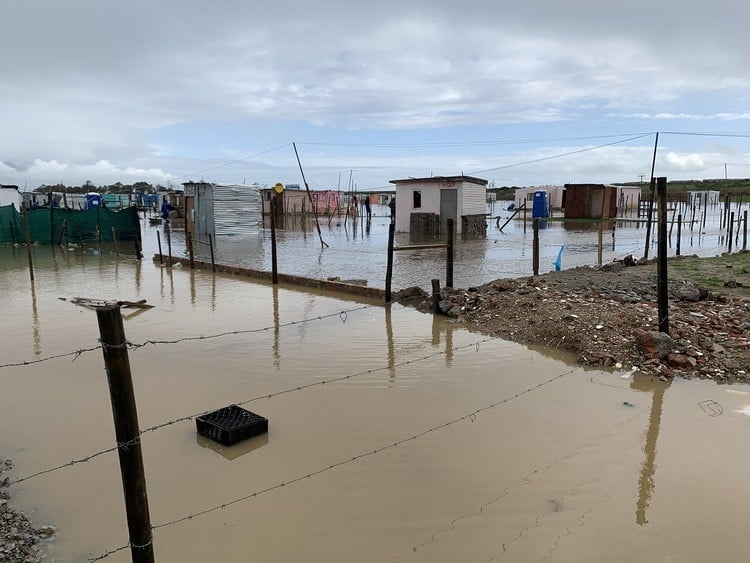 As the first of two storms made landfall in Cape Town late on Friday, dozens of informal settlement residents were left with waterlogged homes, causing damage to furniture items and other belongings, GroundUp reported.

In Khunqu informal settlements in Khayelitsha, Cape Town, resident Ntomboxolo Mpolweni said they reported the flooding to their PR councillor to no avail. "The councillor promised to alert the disaster management. We are praying that we get help today," said Mpolweni.

Another resident, Ntombizodwa Duba, who lives with an 11-year-old disabled girl, said: "We couldn't sleep because of the rain. Our houses look like a river and we have been trying to get the water out with no luck. I don’t know where we will go."

Yoliswa Nakani said her home was prepared for the storm, but that the rain was too strong on Thursday night.

"We tried to put some sand on the floor, but it didn’t help as we were up all night. We are stressed because we don't have a place to stay, and asking other people is not easy, especially now that there is [the coronavirus]. People are afraid of taking a risk," said Nakani.

In Zwezwe, near Doornbach informal settlement in Milnerton, the banks of the Diep River burst, flooding several homes nearby. Yoliswa Nakani says her family have nowhere to sleep on Friday night after their home was flooded.
GroundUp Buziwe Nocuze Community leader Zukiswa Gidimisana and Nandipha Tabalaza who gave birth to a baby boy last week stand outside their shack in Zwezwe near the bank of Diep River which flooded several homes on Friday.
GroundUp Peter Luhanga We live in a world where facts and fiction get blurred
In times of uncertainty you need journalism you can trust. For only R75 per month, you have access to a world of in-depth analyses, investigative journalism, top opinions and a range of features. Journalism strengthens democracy. Invest in the future today.
Subscribe to News24
Related Links
Your weather: Snow, heavy rains and strong winds set to hit SA on Thursday
Brrrace yourselves: 'Major' cold front to bring heavy rain, snow to SA
Special weather alert: Snow, heavy rain and strong winds to lash Western and Northern Cape
Next on News24
LIVE | Covid-19 in SA: Cases at 796 472 as death toll hits 21 709