The flag at the Donkin Reserve.
Anika De Beer

The tallest existing flag in South Africa, at 60 metres, can be found in Gqeberha, Eastern Cape and costs R200 000 a year to maintain.

The flag measuring 12x8 metres is part of a project undertaken by the Mandela Bay Development Agency to commemorate the 67 years former President Nelson Mandela spent in politics.

The flag, which overlooks the Indian Ocean, was built in 2009 at an estimated cost of R2 million as part of the 2010 Soccer World Cup project.

This week, Arts and Culture Minister Nathi Mthethwa made a ham-fisted attempt to explain why government was at that stage going ahead with plans to build a 100-metre flag at a cost of R22 million.

It was due to be constructed at Freedom Park in Pretoria and was going to be the tallest in country. The tallest flag in South Africa flies at the Donkin Reserve monument in Gqeberha.
News24 www.chasingtherainbow.net

Word of the plan was met with anger and bemusement as citizens questioned the cost of the project and the need for a flag when the government's coffers were stretched and many people were struggling with poverty, housing and service delivery.

READ | R22 million to build a 100-metre glow-in-the-dark SA flag pole: What you need to know

On Thursday, speaking at a Black Business Council event, President Cyril Ramaphosa revealed he told Mthethwa to cancel the contract after he had called him asking what to do with the project in light of the public outrage.

Many South Africans accused government of misguided planning, saying the millions could have been put to good use by improving service delivery. Two people lay flowers at the statue in memory of Madiba at the Donkin Reserve. SA's largest flag can be seen in the background.
Getty Images Brian Witbooi/The Herald/Gallo Images/Getty Images

Asked why it cost so much to maintain the flag in Gqeberha, Mandela Bay Development Agency spokesperson Luvuyo Bangazi said the flag system consists of a motor that pulls the flag up 60 metres.

The flag alone is the size of a tennis court, said Bangazi before adding:

You can imagine, this flag is not hoisted by hand, the motor requires maintenance, software updates and occasionally the flags tear due to PE winds and must be sewn.

He said the R200 000 were costs associated with the entire flag system.

According to Nelson Mandela Bay Tourism, the flag was hoisted for the first time during a regal ceremony facilitated by members of the army at the Donkin Reserve in the winter of 2010,  attended by then Nelson Mandela Bay deputy mayor Nancy Sihlwayi. 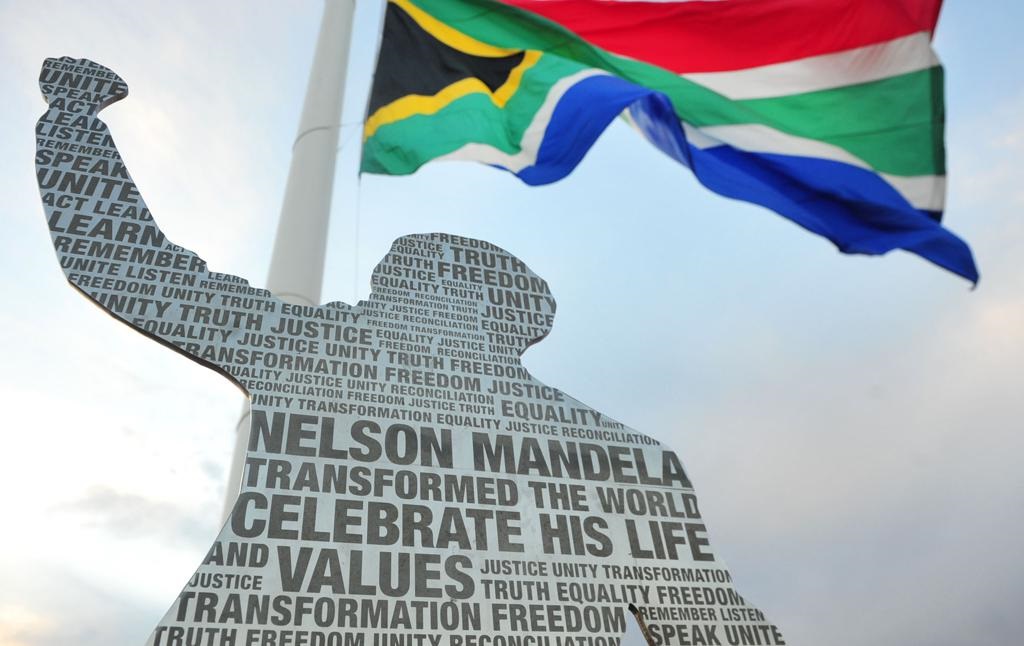 Members of the Bay Area Army hoist the national flag at the Donkin Reserve.
THEO JEPTHA

The Route 67 art and heritage walk starts at the Campanile and goes all the way up to Jetty Street, past the library and St Mary’s Cathedral and to the Donkin Reserve.

The flag is hoisted daily at the reserve and residents are encouraged to go and view it.

Bangazi said costs for the flag project rose to the region of R2 million because the landscaping wasn’t just for the flag station, but the precinct.