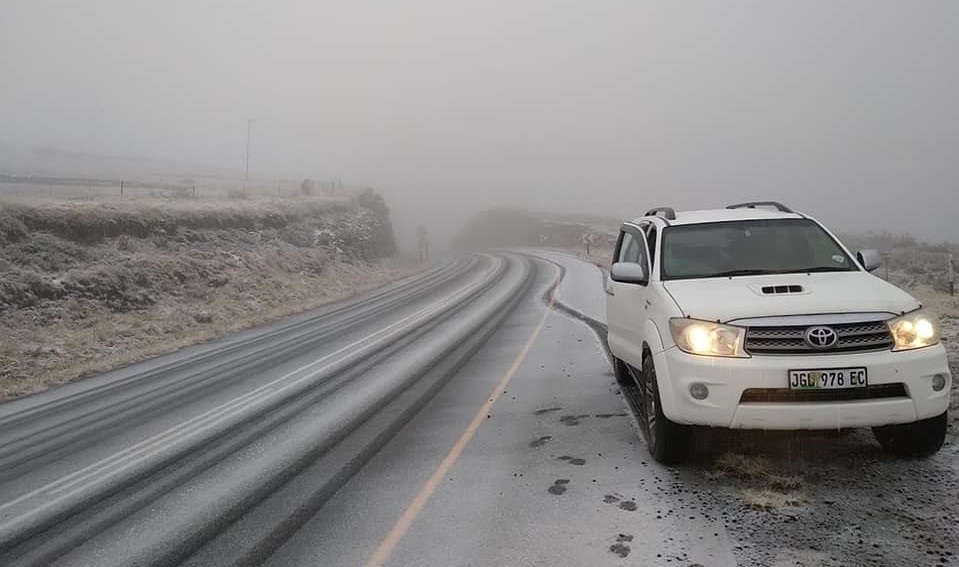 Slight snowfall has fallen in some parts of the Eastern Cape and motorists are warned to drive with extra caution.

Snow has fallen in the southern Drakensberg and in the mountain kingdom of Lesotho.

The famous Semonkong Lodge in Lesotho tweeted pictures of its snow-blanketed lodges on Tuesday morning.

"Our FIRST snowfall for 2021 at Semonkong Lodge, Lesotho! We had approximately 2cm of snow last night. Our fireplaces are roaring and the coffee is flowing."

PHOTOS: Our FIRST snowfall for 2021 at Semonkong Lodge, Lesotho! We had approximately 2cm of snow last night. Our fireplaces are roaring and the coffee is flowing. #LoveLesotho https://t.co/JmMuc12EoO pic.twitter.com/IioOmUTLor

Eastern Cape traffic authorities warned motorists, who are using the R58 at the Barkly Pass, between Elliot and Barkly East, to be extra cautious due to the snowfall.

"The road is drivable at the moment. Motorists are warned to drive with extra caution as the road surface can be slippery. The situation will be monitored as the day progresses," the department said on its Facebook page.

The chance of snowfall is expected to start subsiding on Thursday, with most of it contained over the southern Drakensberg, said the SA Weather Service. Slight snowfall has fallen in some parts of the Eastern Cape and motorists are warned to drive with extra caution.
News24 Supplied

However, melting snow may still result in slippery road conditions after Thursday.

According to the weather service, the latest seasonal forecast indicates a slight probability of above-normal rainfall for the winter season (June, July and August).

"At this stage, there is a chance of snowfall this winter, although the frequency of this cannot be confirmed yet. Moreover, the public are advised to take the necessary precautions in areas where snowfalls are already observed as driving conditions may be dangerous as more snow is still expected.

"Livestock may also be vulnerable at this time as the conditions are very cold," said meteorologist Lelo Kleinbooi.

The public are urged to check the South African Weather Service media platforms for more forecasts and updates.

Meanwhile, the KZN Department of Transport said it would be quantifying the extent of the damage caused by the snowfall in parts of Underberg, Nquthu, Van Reenen's Pass and the Drakensberg Mountains.

"We have received reports that some roads and bridges in district municipalities, such as Ugu District, parts of uMkhanyakude District, eastern King Cetshwayo District and eastern Zululand District, have been flooded.

"A team will be dispatched to assess if there is any damage to transport infrastructure once the heavy rains subside, and they will put together a report on how the department can intervene.

"We also have teams on the ground, who are on 24-hour standby, and our Road Traffic Inspectorate is diverting traffic in areas where roads and bridges have been flooded, especially in low-lying areas," said Nkonyeni.