Students at University of Cape Town covered the bust of the statue of Jan Smuts with plastic and tape.
Gallo Images/Brenton Geach

The University of Cape Town (UCT) has decided to start a renaming process of the Smuts Hall residence.

The UCT council approved the name change at its meeting on Saturday, 19 June.The council deliberated and approved a recommendation of the Naming of Buildings Committee to change the name of Smuts Hall, the student residence on the upper campus.

This decision of Council takes immediate effect in that the name Smuts Hall will be removed from the residence and in the interim the name Upper Campus Residence will be used until such time that the process of determining a new name is formally concluded. Student representative bodies held demonstrations outside UCT on Monday, after three months of campaigning for the name change.

UCT council chairperson Babalwa Ngonyama said: "The utter pain and anguish at the time of the decision to remove the Rhodes statue from campus was significant."

She added that while they have varied perspectives and diverse backgrounds and opinions, they are able to see and collectively forge a more inclusive future and shared identity.

Ngonyama said: "We have as a campus moved closer to a community that can speak with one another, can acknowledge the complexities of the past but honour its gifts, can engage each other to come to new names of campus spaces that we feel is more representative of our current values and who we are as an inclusive collective." Students at University of Cape Town covered the bust of the statue of Jan Smuts with plastic and tape.
Gallo Images Gallo Images/Brenton Geach

She said over the coming months, UCT will be holding discussions across the campus community about the new name for the Upper Campus Residence, as well as for other buildings.

"The changing of names should not be seen as merely replacing what we do not like with what we feel resonates well with us or what we feel we relate better to. It should go beyond the view that the name we are changing is a source of discomfort or pain for those advocating for change." 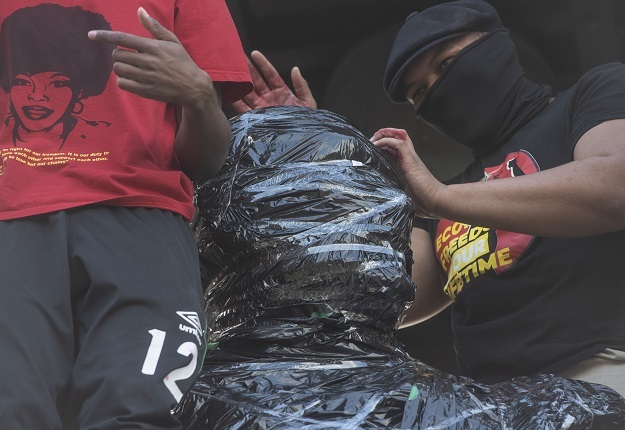 Students at University of Cape Town cover the bust of the statue of Jan Smuts with plastic and.
Gallo Images Gallo Images/Brenton Geach

She added that it should also not be viewed as an act of diminishing, discarding or deviating from history by those who would wish for the status quo to remain.

Smuts was the prime minister of the Union of South Africa, a controversial political negotiator, and a military leader. The bust of Jan Smuts is covered with plastic and tape during a protest at UCT.
Gallo Images Gallo Images/Brenton Geach

"This is a decision we welcome. We of course note there was a demonstration at the residence and (which) covered the bust of Smuts and covered the former residences' name."

Dyer said they support the action as it is symbolic because Smuts cannot be celebrated or be on the university campus.”

The renaming of the Smuts Hall residence marks a new era and indicates how far the institution has come since #RhodesMustFall, UCT said.

The council's decision takes immediate effect in that the name 'Smuts Hall' will be removed from the residence. The name 'Upper Campus Residence' will be used until the process of determining a new name is concluded.

R420k for one Daily Lotto player!
Full list of lottery results
Lockdown For
DAYS
HRS
MINS
Voting Booth
With the Springboks losing their last two matches against Australia, how concerned are you?
Please select an option Oops! Something went wrong, please try again later.
Very concerned! Something is not right ...
59% - 1806 votes
I'm not worried. Every team has a bad game. The Boks will bounce back.
17% - 520 votes
It's too early to tell. Let's see how they go against the All Blacks.
24% - 738 votes
Previous Results
Podcasts
PODCAST | My Only Story: Teen's suicide reveals shadowy ring of predators at top SA schools