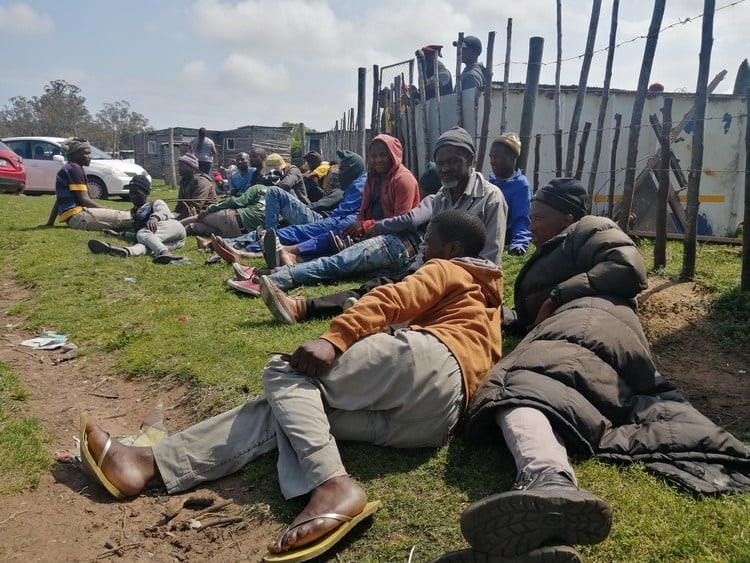 Former Dippin Blu Racing grooms in Port Elizabeth during a meeting outside the Fairview informal settlement where most of them live.
Mkhuseli Sizani, GroundUp

The outcome of a Commission for Conciliation, Mediation and Arbitration (CCMA) hearing on Friday could determine whether dozens of former Dippin Blu Racing horse groomers in Port Elizabeth can claim unemployment benefits, GroundUp reported.

On 17 September, more than 150 protesting workers and people from the surrounding community stormed the stables at Dippin Blu, releasing the horses. What happened then is disputed but one horse died and 20 were injured.

One person was arrested and it appeared that at least two people were injured by gunshots. The conflict stemmed from an incident in February when a worker injured a horse.

The stable owner said the worker stabbed the horse in the neck. The horse grooms disputed this, saying the worker mistakenly cut a horse's ear during grooming.

READ | The UIF is not a 'money tree', says Nxesi as 'mass unemployment' looms

The workers said they pleaded with the owner not to fire their colleague "because that mistake could happen to all of us". In the following dispute, the worker and 39 others were fired.

The group took the matter to the CCMA in March. But then they decided to drop the complaint so that they could apply for UIF, which they couldn't do if the case was pending at the CCMA.

In September, they discovered that the Department of Labour's system showed they had absconded from work, making them ineligible for UIF. The 17 September protest then broke out and the grooms reopened their CCMA complaint.

On Tuesday, Ziphozihle Josefu, provincial spokesperson for the Department of Labour, said the department intervened after the protest.

"During observation it was clear that according to the CCMA, the arbitration was late and no condonation application was received. This means the UIF claims will not be approved at this stage. The department will await the outcome of CCMA to verify whether or not to pay the claims," he said.

Josefu confirmed that the workers are registered for UIF and that the employer is complying with labour laws. "The issue was not with non-compliance but about a strike due to a groomer alleged to have stabbed a horse," he said.

Zukile Matshisi was arrested during the 17 September protest. He says he was shot before being arrested.

"I was on my way to work. I saw the protesting workers running towards our informal settlement. The two security guard vehicles bumped me and I fell down. The police shot me three times with rubber bullets. They arrested me even though I was not part of the protest," he said.

Matshisi made his first appearance on charges of public violence and malicious damage to property at the St Albans Magistrate's Court on 21 September. He was released on bail and is due back in court on 26 October. At the time, the owner of Dippin Blu, Hedley McGrath, said he too was considering legal action against the group.

In an interview on Sporting Post, McGrath gave a detailed account of what happened from his perspective.

An industry with 'serious challenges'

Since their unprotected strike in February, most of the former grooms have not found work and are battling to make ends meet. McGrath and his partner, Yvette Bremner, have also since shut down the stable. Nkosibonile Magquthela said he was also shot and injured during the protest.

He said he had been dismissed from Dippin Blu Racing in February and had found another job a month later at a security company.

He had just returned home from the night shift, he said, when he heard a commotion outside his shack. He went to see what was happening when he was shot, allegedly by a security guard. Police spokesperson Colonel Priscilla Naidu confirmed this. She said a case of attempted murder is being investigated over this incident. Magquthela said: "I heard a big noise behind my shack. I went to check what was happening.

There was a big crowd of residents and horses running. Then a security guard shot me on my knee."

He was taken to Uitenhage Provincial Hospital and then transferred to Livingstone Hospital. "The doctors said the bullet can't be removed because it will damage my leg."

Magquthela said he has not been unable to work since the shooting and fears he can no longer support his partner and their two children, as well as his five siblings who he helps back home in Engcobo. "We are victims in this industry. I had been working [at Dippin Blu] for eight years.

My starting salary was R350 a week. We only received an increase to R1 080 a week after the Economic Freedom Fighters ordered our bosses to improve our salaries in 2019.

"Now I am a burden on my sister because I have no money to buy food," Magquthela said. Thabo Nomkhonwana, 61, from Willowvale, worked at Dippin Blu for about 10 years but has been a horse groom for 43 years. "My duties were to give the horses medication, check their temperature and tend to their wounds. During the Fairview Horse Racing on Fridays I was not paid or given a lunch break.

I tried for many years to fight this but I was told it is part of my job," he said.

A distraught Nomkhonwana told GroundUp this week that the last time he and his 14-year-old son had food at home was in February. Since then, they have relied on neighbours and relatives who give them something to eat. "I don't know what my three daughters in Cape Town are eating because they are also not employed. I used to send them money. I am depressed," he said.

"Last week, I applied for an old age grant. In the meantime, I am trying to plant mealies in my garden just to have something to eat," Nomkhonwana said. Mzawupheli Naki, 53, from Idutywa said he had worked at different stables since 1987. He recalled an incident in 2018 when a horse trod on and broke his leg at the Fairview Racecourse.

"My boss sent me from pillar to post, claiming that he was waiting for the doctor's final report. He only paid me my normal R750 weekly salary for three months... We are victims of unfair labour practice and we don't even have a union to represent us," he said.

Grant Paddock, owner of Paddock Racing Stable, said there are about 13 horse trainers or stables in the Eastern Cape, 12 of which are in Fairview. Paddock said the industry has had "serious challenges" since the Covid-19 outbreak.

"The stakes have dropped by 60% and that means the grooms and trainers will lose jobs.

The way things are going, I don't know if I will still be operating in January," he said.

"The workers are entitled to UIF and minimum wage. But in the last two years they have been getting 1% of the stakes. Grooms should be paid according to their experience. In my stable, I have grooms with 12 years' experience. But here if a minimum wage is R1 000, the grooms want the same amount. You can't pay one more money," he said.

Alan Greef of Alan Stables, which is one the largest, said: "We do everything according to the rules and regulations. Anyone who is subjecting the workers to poor working conditions must be investigated and dealt with accordingly. The stakes are not good but I have kept all my grooms."

The workers now await the outcome of the CCMA hearing on Friday.

We live in a world where facts and fiction get blurred
In times of uncertainty you need journalism you can trust. For only R75 per month, you have access to a world of in-depth analyses, investigative journalism, top opinions and a range of features. Journalism strengthens democracy. Invest in the future today.
Subscribe to News24
Related Links
Underpayments, overpayments, double dipping - AG's findings on UIF and the social grant relief
Tata ma chance: Pensioner arrested for allegedly stealing R4.7m Covid-19 relief money
2 cops among 3 people arrested for alleged Covid-19 UIF fraud in KZN
Next on News24
LIVE | Covid-19 in SA: Death toll at 21 439, with 785 139 confirmed cases

Here are your Lotto and Lotto Plus results
Full list of lottery results
Lockdown For
DAYS
HRS
MINS
Voting Booth
When assisting your child , did you:
Please select an option Oops! Something went wrong, please try again later.
Follow the school's comprehensive sexuality education (CSE) curriculum?
13% - 109 votes
Adjust the CSE curriculum to suit the family's morals?
24% - 197 votes
Ignore the schools CSE programme and do your own teaching?
62% - 509 votes
Previous Results
Podcasts
PODCAST | POLITICS UNMUTED: Turning the spotlight on the media