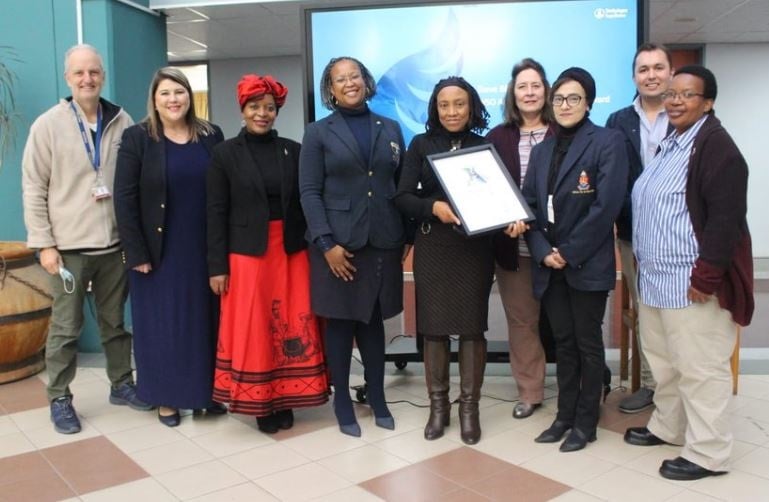 This is why the hospital has reduced treatment times for patients from eight hours to just 15 minutes – a move that has earned it a prestigious international award.

The Diamond Stroke Award was awarded to the hospital at the 2022 International European Stroke Congress, by an international stroke treatment advocacy group, Angels. The hospital's Stroke Unit is the first and only internationally accredited unit of its kind in South Africa.

The award recognised the strides the hospital has made in reducing the disability effects of strokes and preventing deaths caused by strokes. The new treatment approach means patients are more likely to be independent and remain economically active after a stroke.

But the move to fast-track patient treatment has resulted in more than just an award. Because patients are being treated faster, long-term damage to the brain is being reduced and patients need less recovery time in hospital, according to Kakaza.

Most strokes are caused by a blockage in a blood vessel which prevents blood from flowing to part of the brain. The lack of blood can cause brain tissue to die within minutes. Because brain tissue doesn't regenerate, the damage sustained during a stroke can cause be permanent.

During this type of stroke, the area surrounding the stroke site can suffer reduced blood flow – but if doctors act quickly to dissolve the blockage, damage to the surrounding area can be vastly reduced, Kakaza says.

For patients who qualify for acute treatment, the average stay in hospital has dropped from around 33 days to six days.

This not only saves the hospital money, but also frees up beds for other patients, says Gauteng Health MEC Dr Nomathemba Mokgethi.

I applaud the Steve Biko Academic Hospital team for the global recognition. This award is a testament to the hard work of many men and women in our health system, who go above and beyond the call of duty to find ways to improve patient care.

Last year, the Stroke Unit team relooked the management of stroke patients, with the aim of ensuring that patients regain their independence.

This is especially important in a South African context, where stroke patients are often still economically active.

"We see, on average, two to three stroke patients a day. It's a big burden on society. In many developing countries, strokes tend to happen to people older than 65. However, in South Africa we have non-communicable diseases such as hypertension, diabetes, and obesity. In South Africa, the average age of stroke victims is around 40.

"If you're 40 something and suffer a stroke, you can be left with weakness on one side of your body and unable to resume work. You cannot look after family and are dependent on others for care. It's that burden that we are trying to reduce," Kakaza says.

In addition to speeding up patient treatment times, the hospital has increased training for junior healthcare workers to help them identify stroke patients quickly in the emergency room and has implemented a system to better store data for research purposes.

The hospital is also partnering with Boston University in America to implement a rapid AI tool that will allow faster and better interpretation of CT scan images.

"It's all about treating patients as quickly as possible," she says.

Kakaza hopes the lessons learnt by the hospital can be widely applied to improve stroke care – especially as the country has low numbers of neurology specialists.

And with neurologists centered in urban and metro areas, rural towns very often have no specialists available – and with time of the essence in treating stroke patients, travelling to the nearest city can be life-threatening.

"The accolade we have received in this short time serves as encouragement to us to continue to strive to improve the care of our patients. This is a recognition that Steve Biko Academic Hospital is on the right track. It is proof that when departments in the hospital work together, we can achieve more than when we work separately," Kakaza says.