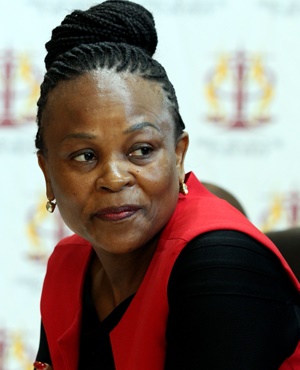 Cape Town - The African National Congress has called the decision by the portfolio committee on justice and correctional services to probe Public Protector Busisiwe Mkhwebane's fitness to hold office a "witch-hunt".

MPs in the portfolio committee on Tuesday agreed to hold an inquiry process into Mkhwebane's conduct during her year-long tenure as Public Protector.

ANC MPs though, voted against establishing an ad hoc committee to handle the inquiry, opting rather to keep the process in the portfolio committee, despite potential legal drawbacks.

ANC national spokesperson Zizi Kodwa on Wednesday said the party noted the committee's decision with "grave concern", essentially slamming the decision of his own party's caucus.

"The ANC views this intended inquiry in a very dim light believing it to be an opportunist exercise requested by the opposition for political expediency," Kodwa said in a statement.

Mkhwebane will be the first Public Protector to be probed over her fitness to hold office, just over a year since being appointed to the position.

She has come under fire from opposition parties for directing Parliament to amend the Constitution by taking away the clause compelling the reserve bank to protect the rand in her ABSA/Bankorp bailout report.

The Democratic Alliance labelled it overreach and gross misunderstanding of her powers. The North Gauteng High Court ruled against her report.

Kodwa believes Mkhwebane has chosen to "focus her attention on serving the masses" rather than solely conducting "Hollywood style investigations.

"Further, she has dared to question the mandate of the Reserve Bank and called upon ABSA, successor to apartheid era bank Bankorp to repay monies lent to them by the Reserve Bank. She has clearly rattled cages and unsettled entrenched interests."

The proposed inquiry was therefore "merely a witch-hunt designed by the opposition to intimidate her into silence", Kodwa claimed.

DA MP Glynnis Breytenbach, who tabled the request, nonetheless said it was a progressive move.

"The DA welcomes the decision..." Breytenbach said on Tuesday.

"The work of her predecessor, Advocate Thuli Madonsela, greatly strengthened our democracy and provided a bulwark against state corruption," Breytenbach said.

"However, the inept and discredited work done by Advocate Mkhwebane threatens to undermine public confidence in the Public Protector's office, precisely at a time when South Africa needs it most."

She called on the committee to proceed with the inquiry with the "urgency and seriousness it demands".

The DA first tabled their intention to hold inquiry proceedings on September 20. It was referred to the committee by National Speaker Baleka Mbete on September 28.

A date has not been set for when the portfolio committee will begin the inquiry, but it will be outside normal parliamentary working hours.

We live in a world where facts and fiction get blurred
In times of uncertainty you need journalism you can trust. For only R75 per month, you have access to a world of in-depth analyses, investigative journalism, top opinions and a range of features. Journalism strengthens democracy. Invest in the future today.
Subscribe to News24
Related Links
ANC MPs say yes to Mkhwebane inquiry, but no to ad hoc committee
Parliament to discuss Protector’s fitness to hold office
Public Protector seeks R884m more from Treasury
Next on News24
LIVE | Covid-19 in SA: 13 575 new cases, 149 more deaths

R446k for one Daily Lotto winner!
Full list of lottery results
Lockdown For
DAYS
HRS
MINS
Voting Booth
When and why would you have your or your partner's sperm count checked?
Please select an option Oops! Something went wrong, please try again later.
That's an unnecessary procedure
17% - 964 votes
As soon as we decide to start a family
7% - 427 votes
Only if we're struggling to conceive
76% - 4433 votes
Previous Results
Podcasts
PODCAST | The Story: Racism rife in South African schools