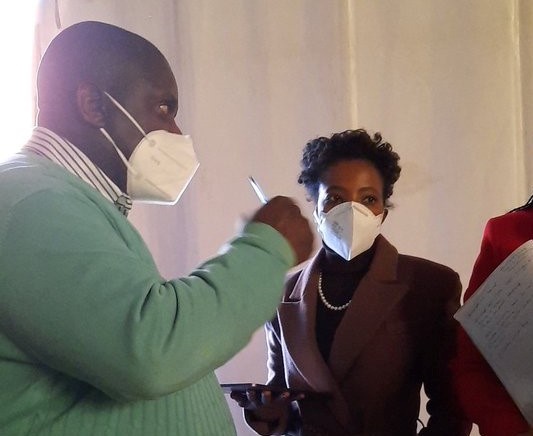 Among the cases Gcaleka came across during her walkabout was that of Portia Makoa and Sihle Thabethe from Soweto.

The young couple was waiting for answers outside the gynaecology ward following the death of their premature twins in July.

Accompanied by friends and family, the couple were scheduled to meet with the head of the unit at 10:00 to get feedback on a report detailing the circumstances surrounding the death of one of the twins - but by 13:00 they were still waiting outside.

She has been embarking on oversight visits at public healthcare facilities across the country to assess the state of the system and get first-hand experiences from staff and patients regarding the provision of services.

Nobuhle Thabethe told Gcaleka her sister-in-law, Makoa, was 26-weeks pregnant when she gave birth to twins - one of them had subsequently died and the other was sent to ICU.

The mother was discharged and taken for counselling but when she returned to check on the surviving twin, she could not find her baby and there were no records of what happened, Nobuhle told Gcaleka.

She said Makoa was then told the second baby had also died.

The couple and their family questioned why they were never informed in time and why the mother had to make an enquiry to find out about the devastating news.

While DPP Adv Kholeka Gcaleka was conducting her walkabout Bara hospital, she came across a family that is seeking answers following the death of their twins days after they were born. The family alleges there was negligence on the part of the hospital. (@Sesona_Ngqaks) pic.twitter.com/T7tkJ77Jvz

"They said they called her [the mother] and couldn't get hold of her. When we asked for answers on what happened, we didn't get it. The file even got lost and it was found on Thursday. The child died on a Tuesday. We questioned how we could be sure that the child was hers, and so a DNA [test] was done," Nobuhle told Gcaleka and her team.

She added they were still waiting for answers after a report was compiled by the unit, but have been sent from pillar to post.

Nobuhle said she had even stopped going to work as she sought answers for her brother.

Their request to meet with the CEO or top management of the hospital was also unsuccessful.

"It's negligence from the word go up until the last day. Here is the mother of the babies, she hasn't received closure on what happened."

The family also told Gcaleka a senior doctor, who was meant to assist Makoa on the day, had supposedly been "eating" and interns were on site to deliver the babies.

The family believes she should have not delivered the babies at 26 weeks and if a senior doctor was on site, things would have not turned out the way they did.

"We arrived here at 10:00 for our meeting. They haven't even seen us or said anything to us. Is it fair to the mother and family? Bara is not doing their job and we want answers," Nobuhle said.

Gcaleka moved to instruct acting CEO Dr Steven Mankupane to get in touch with the section head to ensure the couple was assisted.

After contacting the office, Mankupane said: "The head of the department was aware of the meeting."

He added there seemed to be a communication breakdown.

The family was assisted and a representative from the Public Protector's office joined the meeting.

Gcaleka assured the family her office would take up the matter and monitor its progress.

Patients also flagged the lack of signage at the hospital, which resulted in them getting lost.

They complained about the waiting periods and lack of sufficient care, causing some of them to walk away without being assisted.

Mankupane said the hospital welcomed the criticism and feedback from staff and patients.

"We have learnt a lot from the walkabout. We have picked up areas [and] where there is criticism we have plans to work on that. Some of the issues, there were plans but obviously you need to keep maintaining the plans you have.

"We take all the criticisms that are made positively and I promise the Deputy Public Protector that we will improve and work on the issues that we have picked up as they were raised by respective members of the hospital community as well as people from who came from outside," he added.

We live in a world where facts and fiction get blurred
In times of uncertainty you need journalism you can trust. For 14 free days, you can have access to a world of in-depth analyses, investigative journalism, top opinions and a range of features. Journalism strengthens democracy. Invest in the future today. Thereafter you will be billed R75 per month. You can cancel anytime and if you cancel within 14 days you won't be billed.
Subscribe to News24
Related Links
Eastern Cape R2.7m mortuary almost complete, concerns raised over high Covid-19 mortality rate
Kalahari tragedy: 10th person caught in lodge inferno dies in hospital
Covid-19: Black Africans, Coloured people more likely to die in hospital - NICD report
Next on News24
LIVE | Covid-19 in SA: 6 375 new cases