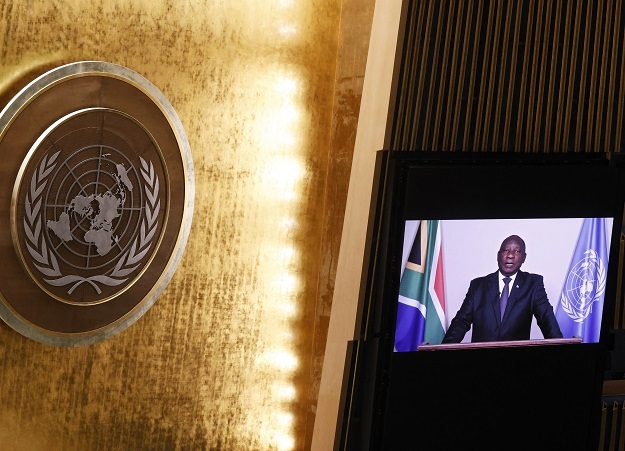 President Cyril Ramaphosa has called on the UN to put reparations for victims of the slave trade on its agenda.

On Wednesday, Ramaphosa delivered a brief statement at the opening plenary of the High-Level Meeting on the 20th anniversary of the adoption of the Durban Declaration and Programme of Action (DDPA).

Twenty years ago, South Africa hosted the World Conference Against Racism, Racial Discrimination, Xenophobia and Related Intolerance in Durban. At this conference, UN member states adopted a landmark plan for combating these scourges.

Ramaphosa said while the world adopted the DDPA 20 years ago, South Africa adopted its Constitution 25 years ago.

"In that Constitution, we affirmed that as South Africans, we are called upon to build a society based on social justice and fundamental human rights, with a view of correcting the injustices of our past."

"These words ring true for all the injustices that have been committed against many peoples around the world."

He described slavery as "one of the darkest periods in the history of humankind and a crime of unparalleled barbarity", saying its legacy persisted in the Americas, Caribbean, Europe, Middle East, and Africa.

Millions of the descendants of Africans who were sold into slavery remain trapped in lives of underdevelopment, disadvantage, discrimination and poverty. South Africa calls on the United Nations to put the issue of reparations for victims of the slave trade on its agenda.

"We support the adoption of special measures, including affirmative action programmes and targeted financial assistance, as restitution to communities whose ancestors were sold into slavery."

He added South Africa also supported all measures to address historical and contemporary discrimination against people of African descent.

"This includes increasing representation of people of African descent in global institutions and in positions of leadership. President Cyril Ramaphosa delivers a prerecorded address to a high-level meeting to commemorate the twentieth anniversary of the adoption of the Durban Declaration being held during the General Debate of the 76th Session of the United Nations General Assembly.
POOL / GETTY IMAGES NORTH AMERICA / Getty Images v

"As we strive to correct the wrongs of the past, we must combat the racism, sexism and national chauvinism of the present. Racism directed at ethnic minorities, migrants, refugees, the LGBTQI+ community and other marginalised groups has led to the denial of opportunity, to institutionalised discrimination, and to violence."

READ | Cyril Ramaphosa | 75 years of the UN: Reform is needed

Ramaphosa said 20 years ago, the world committed to an anti-discrimination agenda that would bring new hope and change to the lives of millions.

"Just as we stand united to combat the Covid-19 pandemic, we must recommit ourselves to implement the Durban Declaration and Platform for Action. We must pursue this objective with energy and goodwill."

He added everyone had a stake in the fight to end racism.

"Let us all allow humanism to be our guide and solidarity be our strongest force. We are called upon by history to redouble our efforts to build a world free of racism, to right the wrongs of the past and to restore the human dignity of all."