"We [as Ukraine] are puzzled by the vote and the decision by South Africa to abstain during the vote. We are especially dismayed, given the fact that South Africa is the leader of democratic processes, not only in the region [the Southern African region] but globally.

"We consider this approach taken by South Africa as not being useful for the resolution of conflict. We are aware of the reasons that South Africa has given for their stance, but even in that we still find it very alarming.

"For us, what is more shocking is, in that explanation, we don't see any words around the Russian invasion, aggression or military action in the territory of Ukraine. 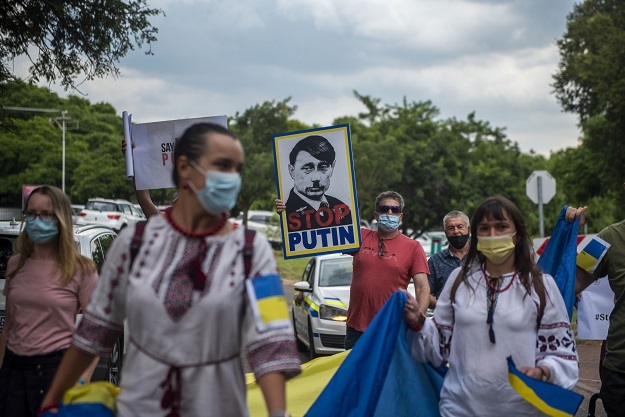 Members of the Ukraine Association of South Africa protest against Russia's invasion of Ukraine at the Russian embassy in Pretoria.
Gallo Images Gallo Images/Alet Pretorius

South Africa, Namibia, Mozambique and Angola abstained during Wednesday's United Nations General Assembly vote to reprimand Russia for invading Ukraine, and which demanded that Moscow withdraw its military forces. The action aims to diplomatically isolate Russia at the world body.

Abravitova thanked Botswana and Zambia for voting in favour of the resolution, saying it was a good sign "that these countries are not merely falling in line with what some Southern African countries are doing".

She was responding to a question by News24 during a Zoom briefing, which was called by the Ukraine Embassy on Thursday.

The Ukrainian ambassador addressed the rising wave of aggression of the Russian Federation against her country.

Abravitova said that, despite the Russian army utilising some of its best tactical units, "none of its key goals have been achieved".

"Russia's main goal is to take charge of the capital Kyiv and, in the process, to change the current government for a more pro-Russian one," said Abravitova.

She said that, despite the resilient Ukrainian resistance, 40 000 people had been left without power and food in the east of the country.

"The enemy has not allowed for the evacuation of these people. We cannot remove even the disabled people in this area. We cannot provide basic needs. It's fast becoming a serious humanitarian crisis," said the ambassador.

She said the Russian army had targeted "objects of critical civilian infrastructure", and their missiles had, in particular, hit a radioactive waste disposal site near Kyiv.

"There are no leaks detected so far, but with the random shelling going ahead, it's possible to damage the infrastructure and then cause another environmental crisis," said Abravitova.

She encouraged Ukrainians and "our foreigners who are still in Ukraine" not to use any unconfirmed channels to get out of the country.

"These corridors might not be secure. We encourage people to check the Ukraine foreign affairs ministry and their own embassies," said Abravitova.